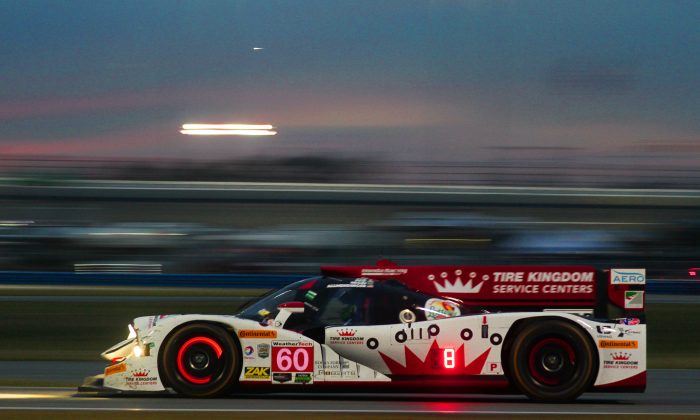 Olivier Pla and AJ Allmendinger took superman stints in the #60 Shank Racing Ligier-Honda and kept the car in the lead from twilight through full dark. (Chris Jasurek/Epoch Times)
Motorsports

There were six caution periods in the first eight hours and three retirements: the #70 Mazda Prototype (mechanical,) the #0 Panoz DeltaWing (collision,) and the #54 Core Prototype Challenge car (massive engine failure.)

A mixture of Daytona Prototypes and LMP2 cars have shared the overall lead, with the #02 Ganassi Riley-Ford, the #31 AXR Coyote-Corvette, and the Ligier-Hondas of Shank Racing and ESM leading the majority of the laps.

Andy Meyrick in the DeltaWing collided with the stalled #20 PC car and totalled the DeltaWing; the #55 Mazda fell to the back of the Prototype filed when it couldn’t restart after a driver change. The team changed the ECU and the car has been running flawlessly since.

GTLM has been a Porsche-Corvette battle by and large, with BMW occasionally breaking into the top three. GTD has been dominated by Lamborghini—the new Huracáns seem to have a little top-end advantage on the banking.

The race’s sixth caution slowed action after eight and a half hours of racing, when Nick Tandy spun a car.

The race restarted at 10:36 p.m. on lap 241, with Tony Kanaan in the #02 Ganassi Riley-Ford leading the field. Kanaan ran wide in the International Horseshoe, letting Ricky Taylor in the #10 WTR Dallara-Corvette get by. Oswaldo Negri in the #60 Shank Ligier pulled past on the banking, dropping the Indy 500 winner to third on the first green lap. Negri passed Taylor coming through the tri-oval on the next lap retaking the overall lead.

Earl Bamber in the #912 Porsche RSR led GTLM at eight hours, with Jan Magnussen in the #3 Corvette right behind. James Calado in the #72 SMP Ferrari 488 passed Olly Gavin in the #4 Corvette to take third, breaking up the Corvette train.

Tom Kimber-Smith in the #52 PR1/Mathiasen Oreca led Prototype Challenge ahead of Brendan Gaughan in the #20 BAR1 Motorsports car and Kyle Marcelli in the #38 Performance Tech machine.

Lamborghini continued to dominate GTD, with Mirko Bortolotti in the #48 Paul miller Huracán leading the similar #16 Change Racing car of Spencer Pumpelly and the #44 Magnus Racing Audi of Rene Rast.

After barely ten minutes of racing caution number seven was waved as the #21 Konrad Motorsport Lamborghini Huracán died on course.

Ricky Taylor and Tony Kanaan both pushed past Os Negri on the restart, and Jan Magnussen and James Colado got the jump on Earl Bamber to take first and second in GTLM.

Check back periodically for mote notes and photos.