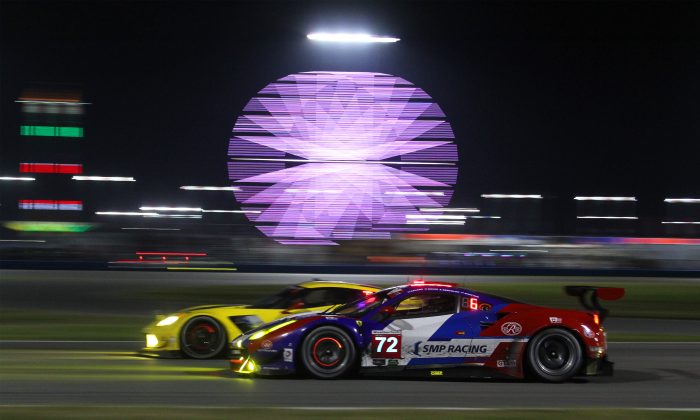 The #72 SMP Racing Ferrari Battle on of the Corvettes entering the International Horseshoe just before the halfway point of the 2016 Rolex 24 at Daytona. (Chris Jasurek/Epoch Times)
Motorsports

2016 WeatherTech Rolex 24 at Daytona at Halfway

DAYTONA BEACH, Fla.—Just past halfway, the 2016 WeatherTech Rolex 24 at Daytona is still a very interesting race.

After LMP2 cars dominated the first six hours, DPs took over for much of the second six, after the Shank Ligier blew its engine and left oil all over the track. The #02 Ganassi Riley-Ford had to hit the garages for a full brake change and lost a lot of laps. The #55 Mazda caught fire shortly after the 11-hour mark.

The #02 ESM Ligier got penalized for running the pit-line red light, but fought back to take the led shortly after the halfway point. Luis Felipe Derani managed to take the lead briefly just past halway before handing off the Ed Brown, dropping the car to fifth.

GTLM was nonstop action from go, with the top five cars often within two second of each other. Porsche led 1–2 with the Risi and Scuderia Corse Ferraris right behind. Nick Tandy, speaking after his first stint, said that Porsche and everyone else was saving their cars for the finale. If by “saving” he meant, driving flat out as if every lap was the final lap of a sprint race, he was completely accurate.

Prototype Challenge lived up to its reputation by causing numerous cautions, but the top three car were still on the same lap after 12 hours, with Nicholas Boule in the #523 Pr1-Mathieson car in the lead.

TD was also hotly contested, with 11 cars on the same lap. Wolf Henzler in the #23 Team Seattle-Alex Job Racing Porsche held the class lead, followed by Pedro Lamy in the #98 Aston Martin Vantage GT3 and Frank Stippler in the Frikadelli Racing Porsche.

There were 14 yellows in the first 12 hours and two more in the next hour, as bad driving and attrition thinned the filed.

The #0 Panoz DeltaWing, the #70 Mazda Prototype, Three PCs—the #54 Core, the #88 Starworks, and the #38 Performance Tech Orecas, and the Shank Racing #60 Ligier JS P2 Honda were officially retired by the halfway point.