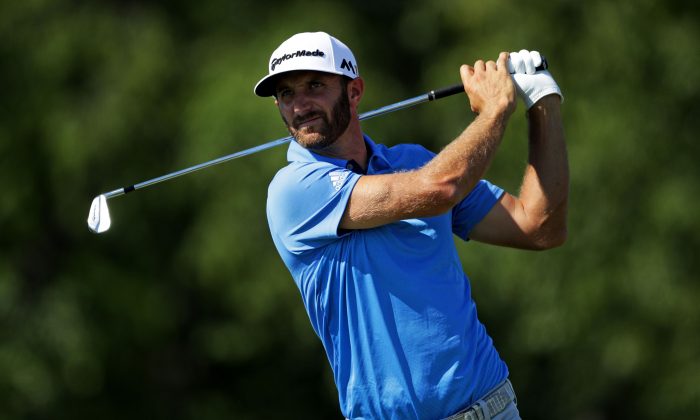 Dustin Johnson plays his shot from the 14th tee during the second round of the U.S. Open at Oakmont Country Club on June 17. (Sam Greenwood/Getty Images)
Golf

OAKMONT, PA—The storyline for a quite a few years now is given the awesome talent Dustin Johnson possesses it’s would be just a matter of time before he would win not only one major but likely several of them.

It’s now 2016 and Johnson is still looking to win his first.

But, after losing last year’s U.S. Open by a shot with a shocking three-putt final hole to Jordan Spieth, Johnson demonstrated 36-holes of quality golf on Friday at Oakmont CC putting rounds of 67 and 69 together. Johnson’s -4  has him tied for the lead with unknown Andrew Landry who did not start his second round given the adjusted golf schedule needed after Thursday’s massive thunderstorms disrupted play several times before ultimately forcing a suspension late in the afternoon.

Johnson’s first round was bogey free and given Oakmont’s stern reputation his round was truly well played. In his afternoon round Johnson did have a long bogey at the par-4 1st – his 10th hole of the second round — but he finished strongly with a birdie and a series of pars to leave him once again in the position of being ever so near to garnering his first major triumph.

Things were not so good for the so-called “Big Three” in golf. World number-one Jason Day fired a 76 to start his play and is at +5 through 15 holes of his second round. Jordan Spieth scored 72 in round one and Rory McIlroy fired an abysmal seven-over-par 77 and unless he plays much better is in danger in missing the cut.

For Johnson the day of reckoning is again at hand. The 31-year-old has been in the hunt numerous times and although he has won 11 times on the PGA Tour it is the near misses in golf’s major events that have dogged him thus far with last year’s meltdown on the 72nd hole at Chambers Bay being the most recent and glaring.

Oakmont CC may be the optimum course for Johnson who excels in hitting it both long and straight. Keeping the ball in play has become a must item to negotiate a layout that waits just the slightest of errors to extract serious pain on any golfer’s scorecard.

Johnson has a slight advantage in that half of the field will now have to play either 36 holes or near to it to complete 54 holes. Where the course was soft from Thursday’s heavy rains — it will only get firmer and faster as expected sunny skies this weekend will bring back the speed for both the greens and fairways.

Interestingly, another talented non-major winner is only two strokes behind Johnson — Sergio Garcia. The talented Spaniard played with Dustin and his play has been solid thus far and is in a tie for 4th. Garcia  was helped considerably in making a 45-foot par putt at the 9th — the 18th hole of his second round — after hitting a horrendous tee shot in a parallel ditch and miraculously escaping would could have been far worse.

Much golf remains to be played but it is Johnson who faces a similar hurdle he has been unable to get beyond in his professional golf career. Can he finally do it this time? The talent is certainly present but champions in golf need a healthy mixture of the physical and mental prowess to overcome and achieve the ultimate golf tagline — U.S. Open champion.