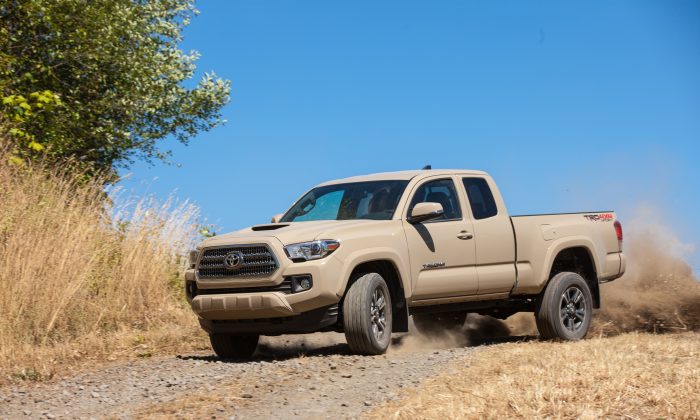 I spent a lot of time the last part of 2015 either looking at, driving, or talking about the 2016 Toyota Tacoma mid-sized pickup truck.

My immersion in all things Tacoma, Toyota’s award-winning truck that’s manufactured partly in a plant located in San Antonio, Texas, began with a trip to Houston in September. Not far from Bush Intercontinental Airport, a group of car writers were invited to test the recently redesigned Tacoma both on and off-road.

While the drive around the area was quite scenic, with parks and waterfalls providing a pastoral backdrop for Tacoma photo poses, the off-road course designed by Toyota was even more exciting with its twists, turns, rocky hills, and mud slides.

The Tacoma performed like a true champion on both courses. It especially amazed us with new off-road technology that made us all look like pros. Well, almost.

Not long after the drive, some journalists were invited to take a trip down to San Antonio to tour the plant where Toyota manufactures both the Tacoma and their larger Tundra pickup trucks.

We were given an educational and entertaining tour of the plant, which even included a chance to dress up in white swaddling materials that made us look like creatures from Ghostbusters (Paintbusters?) to explore the paint shop. It was there I learned not to give up my day job to apply for work, since my skills in drawing a straight line or even choosing correct color gradations were sadly lacking.

The men and women employed by Toyota at this state-of-the-art plant are highly skilled craftsmen. They also seem to be very passionate about their work.

The highlight of the plant tour for me was hearing the testimony of a young man who recently graduated from the plant’s outreach program for high school or community college students. After completing his internship, Brandon—although still in his 20s—now has a terrific career with Toyota. He expects to make $58,000 in salary and bonuses this year; not bad for a kid who thought college wasn’t for him!

My next experience with the Tacoma came a short time later, at the 2015 Truck Rodeo presented by Texas Auto Writers Association in October. At that event, held at the sprawling Knibbe Ranch near San Antonio, 69 auto writers convened to drive 88 trucks, SUVs and CUVs both on and off-road. Our task was to choose the Truck of Texas and winners in other categories.

The Tacoma performed like a true champion on both courses.

There I spent some time riding along and talking with the Tacoma’s Chief Engineer Mike Sweers, who is extremely knowledgeable about the truck he helped create. Sweers is deservedly proud of the Tacoma’s capabilities, and while he may not realize it, his enthusiasm probably helped convince us that his truck was a winner.

The 2016 Tacoma impressed us with its powertrain featuring an Atkinson cycle V6 engine producing 278 hp, and the super new Crawl Control system that makes the toughest off-roading a breeze even for a novice. The Tacoma’s redesigned look boasts an aggressive upper grille and a more muscular hood. The truck’s locking tailgate with integrated spoiler were also nice features, and the Tacoma logo added pizzazz. We also liked the GoPro(R) mount on the rear view mirror for tracking our off-road abilities.

After two days of demanding on and off-road driving at the Knibbe Ranch, the winners were announced. Thanks to its new powertrain, enhanced suspension tuning and off-road technology, the Tacoma out-performed the competition to be chosen Mid-size Pickup Truck of Texas for 2015. This marked the first win for a Toyota truck in the history of TAWA’s Truck Rodeo.

“As America’s best-selling mid-size pickup for 10 years running, the recognition as Mid-size Pickup Truck of Texas confirms our efforts to produce a great truck that will carry Tacoma’s legacy as the toughest, most durable truck in the segment,” said Mike Sweers, Tacoma chief engineer. “Toyota’s commitment to the new Tacoma was focused on meeting the needs of adventure-seekers on a variety of tamed and untamed surfaces.”

It’s easy to predict there will be many more Tacoma sightings on Texas and other state’s roads this year.

TAWA is a Texas-based nonprofit association for automotive journalists promoting professionalism and quality in journalism for more than two decades. TAWA produces two annual events—Texas Auto Roundup and Texas Truck Rodeo—that allow members to experience vehicles from various manufacturers in one place, at one time.