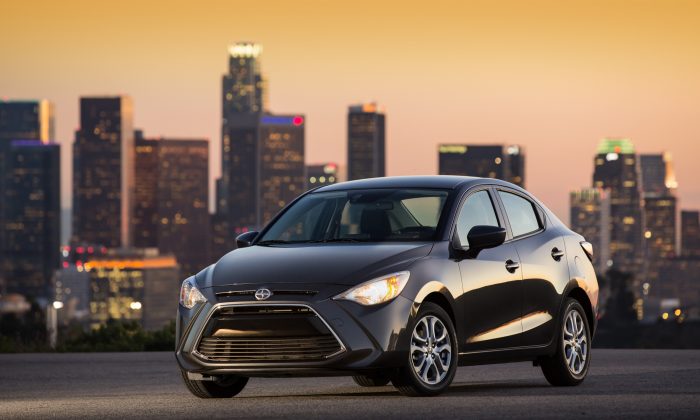 Let’s get one thing out of the way in discussing Scion’s first sedan: Yes, it looks like a wannabe Mazda. Want to know why? Because it’s a Mazda. A Mazda2, to be specific. But wait, isn’t Scion a part of Toyota? See, here’s where things get complicated.

The otherwise delightful Mazda2 hasn’t done as well as was hoped against the likes of the Honda Fit, Toyota Yaris, Ford Fiesta, Nissan Versa, and Chevy Sonic. So, at some point in the development of the second-generation model, it decided to throw in the towel, at least in the U.S. market. We won’t get the next Mazda2, at least not according to current plans.

That’s where Scion stepped in; it was looking for a decent entry-level product and hoping to avoid using a lightly-modified Yaris, because that didn’t work out so well for the xA. Unfortunately Scion doesn’t have much of a budget for developing its own unique products, either. A deal was cut with Mazda to sell a rebadged Mazda2 as a Scion, and the rest of the story is right here.

This isn’t the first time Scion’s played this game; the FR-S is a virtual clone of the Subaru BR-Z. If Mazda decides to bring the Mazda2 back after all, the deal is that they’ll sell the hatch while Scion gets the sedan. In the meantime, the big-jawed iA aims to inject a more stylish element into the entry-level sedan segment.

Speaking of virtual clones, the iA doesn’t change much from the source material. Apart from unique front end sheet metal, this is essentially a Mazda2. The curving character lines on the flanks, pedestal mirrors, and even the headlight shape are pure Mazda.

Is this one going to be radical enough for Scion? Well, the restyled front end has been drawn to be polarizing. A massive trapezoidal air intake seems to be making fun of Audi’s single-frame grille, topped by a narrow air inlet similar to that of the BR-Z coupe. The Mazda headlights are even sculpted into the hood line. The dropped jaw may grow on you. That, or you’ll start to hate it. The Mazda and Scion styling cues clash slightly, for a look that’s unique.

The interior is sparse, and again, it’s all Mazda except for the Scion badge on the steering wheel. The 7-inch stand-up touchscreen, three-spoke wheel, single-gauge instrument panel flanked by digital information screens and retro-ish passenger side trim are all Mazda signifiers. Fortunately, the car’s got just enough of a generic flavor that it works reasonably well as an entry-level Scion as well.

A navigation system is optional, but the reverse camera and push-button start are standard. There’s room for four easily and the iA?s 13.5 cu ft trunk is big for the class. It’s a Scion, so the sound system is first-rate, with a 7-inch touchscreen, six speakers and built-in music apps like Pandora and Stitcher. Voice recognition enables hands-free operation.

Mazda’s 1.5 L 4-cylinder provides power, of course. It’s got direct fuel injection and produces 106 hp. That doesn’t sound like much, but the iA only weighs about 2400 pounds. Even without massive horsepower, performance is pleasing. The iA’s an eager little thing, bounding happily away from traffic lights and around curves. A choice of 6-speed manual or automatic transmissions is offered. Fuel economy’s good too, returning up to 41 on the freeway with the manual transmission and 42 with the automatic.

The suspension’s a predictable small-car setup, with MacPherson struts and a torsion beam suspension. Mazda’s influence is clear here as well; the iA is sportier than you’d expect, affecting a neutral attitude in hard cornering rather than the typical economy-car understeer. The brakes are pleasingly responsive as well.

There’s a cool low-speed pre-collision system that you’ll hopefully never have to use. An infrared camera with a 20-foot range is active at speeds from 2-18 mph, and looks for large objects in front of the car. If there’s another car there, it will yelp and pre-charge the brakes if the driver doesn’t notice. Brakes are automatically applied if the driver doesn’t react. Additional safety is provided by a secondary collision reduction system that automatically applies the brakes and turns on the hazard lights if you’re hit from behind.

The iA may lack a bit in Scion identity, but as I mentioned before, a small Mazda’s not a bad thing to be either, and your car un-savvy friends won’t notice anyway. Pricing is reasonable, falling nicely into entry-level territory. The iA with a 6-speed manual transmission is $15,700, and the automatic bumps the price to $16,800.

The iA is a mono-spec vehicle, so the only decision to be made is the transmission.