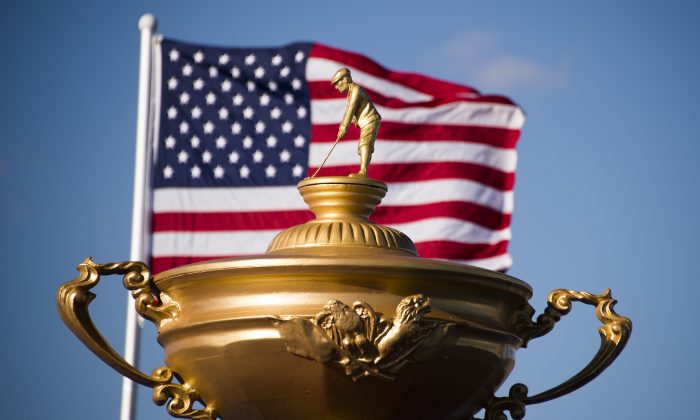 Chaska, MN—Few courses that have remained active in hosting major events of all types have undergone the series of improvements Hazeltine National Golf Club in Chaska, MN has gone through. Opened for play in 1962 and designed by the legendary architect Robert Trent Jones, Sr., Hazeltine has had an array of cosmetic changes over the years and can be now stretched to just over an imposing 7,600 yards.

Beyond the various course improvements made over the years, Hazeltine National will also feature a re-routing of the existing layout. The reason? Simple. The host club — in concert with the PGA of America — opted to include more grandstand and corporate tents, hence more money to be pocketed. The original routing — holes #16 and #17 — were not as conducive for such purposes and therefore flipped to the outward nine location.

Rees Jones, Trent’s youngest son, has also played a major role in beefing up the course and eliminating the original elements — countless dog-legs — detested by many of the game’s best players going back to when the course first really hit the golf spotlight when hosting the 1970 U.S. Open. Hazeltine National doesn’t possess a stunning array of holes but it does require top tier execution and will not tolerate wayward play or ill-thought out decision making.

The four holes below could very well play a major role in shaping not only the outcome of various matches but ultimately determining what side prevails and takes possession of The Ryder Cup.

Originally the 16th hole was a pedestrian par-3 — the later creation of this hole which came into being prior to the 1983 U.S. Senior Open — added a good deal more theater than present before. Set adjoining Lake Hazeltine, the players will need to choose wisely off the tee as the hole turns right in the drive zone. Trees protect the right side and a menacing creek hugs the left side. The green is exposed and sits on a slight rise of land that juts into the lake. The green is set at an angle so getting the right club selection is crucial. Wind velocities can also play havoc with shots as the putting surface is completely exposed to the winds off the adjacent lake. It’s just too bad this hole is no longer in the preferred 16th hole position.

What was the closing hole — in all previous major events at Hazeltine — now serves as the midpoint of one’s round. A pity. The hole climbs uphill and the cluster of sand traps on the left side needs to be deftly avoided. It was on this hole that both Rich Beem and Y. E. Yang were able to seal victory in the ’02 and ’09 PGA Championships held respectively at Hazeltine — both times with Tiger Woods finishing as runner-up.

The green is ably defended and the contours on the green will demand a quality approach to provide a reasonable birdie attempt. A stout hole that yields nothing without superior execution.

The length for the hole can be adjusted and one can expect plenty of fireworks here. The par-5 can be reached in two shots but those doing so must contest with a pesky pond that guards the left side of the green. Matches that are behind might see this hole as a great opportunity to turn the tide.

While caution needs to be respected here — those able to make the bold play can seize the moment and with that their respective match.

If matches should get to the final hole the players will find a more demanding hole than encountered in earlier championships at Hazeltine. The drive zone is flanked by protecting bunkers and they have been pushed closer to the green so only the strongest of tee shots can potentially carry them. The green is especially contoured and any approach missing long or to either side will have to work especially hard to earn a par. While Hazeltine’s finish hole is not especially noteworthy from an architectural perspective the very fact that any match coming this far will exert an incredible amount of pressure with potentially the Ryder Cup hanging in the balance.