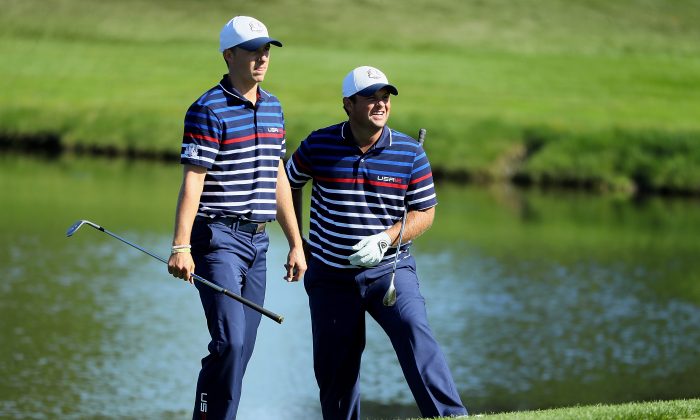 Jordan Spieth looks on with Patrick Reed during practice prior to the 2016 Ryder Cup at Hazeltine National Golf Club on September 29, 2016 in Chaska, Minnesota. (Andrew Redington/Getty Images)
Golf

CHASKA, MN—All of the fanfare has now passed and this morning the 41st Ryder Cup commences with four foursomes matches. The format has proved to be a vexing one for Team USA over the last several matches.

Foursomes is a style of play many Americans likely do not play. Each twosome decides who tees off the 1st hole and all odd number holes — the players then play the hole in alternate fashion. The other player hits the lead ball on all even number holes.

The format requires a steady consistency given the fact only one ball is in play for the duration of the match. In the ’14 contest at Gleneagles in Scotland — Team USA lost 7 of 8 points in the format. It was a deficit they could never overcome.

Given the fact America has won only two of the last ten Ryder Cups it would seem imperative to get off to a good start so that the momentum and involvement of the home crowd can become even stronger as the event proceeds.

The announced matches present clear opportunities for both sides.

Both Captains, Davis Love III and Darren Clarke, have gone with real firepower in the initial match. The desire to get momentum going is clearly present. Reed provides plenty of emotion and hooked up with Spieth will provide no less energy. On the Euro side

Rose is a steady performer and Stenson — assuming his pre-event knee issues are not an issue — is also a formidable presence. The putting equation would seem to favor the Americans but the overall ball striking of the Euros provides a compelling counterweight. There’s little edge here but I believe the Americans will figure out a way to get the needed momentum going for Team USA.

Mickelson is a big veteran for Team USA but his overall record is less than sterling given his all-time career. Fowler made the USA sqaud via a Captain’s selection and has never won a point in two previous Ryder Cup performances. McIlroy has won in his last two outings — capped off a win last week at East Lake for The Tour Championship and Fed-Ex Cup. The Northern Irishman is paired with one of the six Euro rookies playing this week in Sullivan. The format somewhat dilutes the superior strength that Rory can provide but should Mickelson and Fowler try too hard it’s entirely possible for the Euro tandem to grab a point here.

Superb pairing of top tier players. The American duo has a tenacious pair with Johnson often surprising with gritty play. Walker won this year’s PGA Championship and when on form can be as tough as any player in the world. The Euro side has the stature of Garcia who is one of the all-time best players in Ryder Cup history. Kaymer can be hot and cold at times – when he’s the former this duo can be quite strong. This match is a very tough call and I see the match being tied with no winners.

This is one match, at least on paper, should favor Team USA. Westwood and Pieters were both Captain picks and Pieters is a Ryder Cup rookie. Westwood has experience from past Ryder Cups but his play has been spotty this year. DJ has played superlative golf for much of ’16 and Kuchar can be a reliable presence. Getting a much needed point before the afternoon fourball matches could be a real boost for the American side.