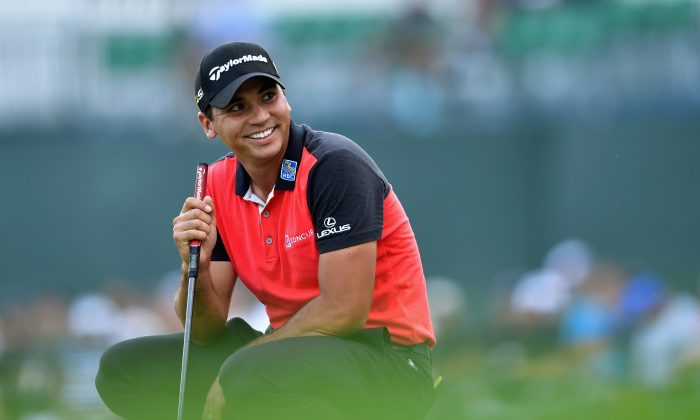 Jason Day of Australia smiles on the 18th green during the second round of the 2016 PGA Championship at Baltusrol Golf Club on July 29, 2016 in Springfield, New Jersey. (Stuart Franklin/Getty Images)
Golf

SPRINGFIELD, NJ—At the end of the ’15 golf season there was much media chatter about the sport having a new version of “The Big Three.” This was in reference to the original Big Three which consisted of Jack Nicklaus, Arnold Palmer and Gary Player. The new version would consist of Aussie Jason Day — the existing world number one player followed by the likes of American Jordan Spieth and Northern Irishman Rory McIlroy.

What was hatched by a number of media people was slightly premature. As the ’16 season has unfolded it has become clearly obvious one man is clearly beyond all the others. Open up the envelop please and hear his name loud and clear — Jason Day.

The 28-year-old has been nothing short of brilliant for his consistency since winning the PGA Championship at Whistling Straits when he turned in a virtuoso performance of -20 for the week. The stretch of world class actually preceded last year’s PGA when Day finished strongly to garner the Canadian Open title. In 22 starts since that win — Day has won seven times. His other so-called Big Three rivals are simply in his rear view mirror for now.

Coming into Baltusrol for this week’s PGA Championship Day had to deal with an illness to his children and an allergic food reaction faced by his wife. With those events happening Day opted to skip playing a practice round Tuesday and showed up Wednesday and played Baltusrol Lower for the first time  –just one practice round. Given all of that the Aussie played a quality conservative first round scoring 68 leaving him just three strokes off the lead of Texan Jimmy Walker.

With the start of the 2nd round impacted by Friday morning showers — and the afternoon wave of tee times pushed back 45 minutes Day demonstrated a capacity that none of his chief rivals — save for Sweden’s Henrik Stenson — has shown. The wherewithal to focus on one shot after another and keeping perspective that any major is about being patient at crucial moments.

Day had a quick birdie at the 2nd but quickly gave that back with a bogey at the long par-4 3rd. At the most demanding of holes on Baltusrol Lower the par-4 7th, Jason made double-bogey and for just about any other golfer that derailment might have caused a dead end for the balance of the championship. Not for Day. Over the last 12 holes Day produced seven birdies and incredibly not one of them came on the concluding two holes — both par-5′. Jason’s 2nd round 65 demonstrated in a convincing manner how a world number one player handles adversity. After two rounds Day’s cumulative total of 133 is just one shot behind the co-leaders — Jimmy Walker and American Robert Streb who shot the round of the championship thus far with a major chanmpionship and course tying seven-under-par 63.

In his rise to the top of the golf rankings Day has said he intends to do his utmost to remain at the top of the pecking order. His play in Friday’s second round shows what grit he possesses and how he is poised to be the first golfer since Tiger Woods took possession of the Wannamker Trophy in ’06 and ’07 at Medinah and Southern Hills respectively. Assisting with Day’s rise to the top has been Woods. The two have become close friends and often speak with one another. Although Day brings forward a genuine affable side in his dealings with all who come in his orbit — he also possesses a steely resolve that doesn’t permit to ever look back or get too far ahead of himself.

In his Wednesday press conference — Day said it simply and right to the point, “Winning takes care of everything.” He went on to say, “I need to get back to the point where I feel like I go out there and win every single week.” Do those comments sound familiar? Woods said as much whenever he competed.

Day will be in the penultimate pairing with 23-year-old Argentinian Emiliano Grillo. Saturday is usually referred to as “moving day” and it’s clear that anyone contemplating a possible PGA Championship victory will need to play superlative golf in order to be positioned for Sunday’s final round.

When Jason Day arrived on the professional golf scene he showed early glimpses of the talent he possesses. Frankly, when Day provides his “A” game there is no one who can consistently match what he is doing now. However, Day is just as quick to realize that yesterday’s headline is exactly that. “You’ve got to come out and fire on all cylinders and get yourself up the leaderboard and show people that you’re there and you’re ready to win.” Those competing against Jason are well aware of what he has done and what he is prepared to do this weekend at Baltusrol.

* WALKER AND STREB AT TOP OF LEADERSHIP

Just two weeks after recording his best finish in a Major, Patrick Reed posted the lowest major-championship round of his short career, a 65, that placed him in a tie for sixth place. Reed’s previous best was 66 in first round of the 2016 Open Championship. He is in search of his first win in 18 months — since the 2015 Hyundai Tournament of Champions.

* IN THE 60s AGAIN FOR STENSON

With Jimmy Walker (-9) and Robert Streb (-9) atop the leaderboard after 36 holes, the season’s narrative of first-time major championship winners is alive and well at Baltusrol. Both remain in search of their first victory in a major championship, as does Emiliano Grillo (-7), who is tied with Jason Day for third place, two shots back with Open Champion Henrik Stenson lurking just one stroke further back at -6 and along in 5th. The Masters (Danny Willett), U.S. Open (Dustin Johnson) and Open Championship (Stenson) have all been claimed by first-time winners in majors.

* SEVEN PGA CHAMPIONS TO STICK AROUND FOR THE WEEKEND

Two-time PGA Champion and four-time major winner Rory McIlroy will be heading home for the weekend — for the second time in a major in ’16 — the first coming at Oakmont this past June in the US Open. The world’s 4th ranked player appeared to be in fine form to make the cut which came at 142 (+2). After birdieing the 17th hole all it would have taken was no more than a par on the par-5 18th. However, a final hole bogey pushed the Ulsterman to the outside. This marks the first time McIlroy has had two missed cuts in a major since 2010. Much of his demise can be summarized simply — a balky putter that has simply left Rory unsure of what will happen with key strokes throughout any round.

US Open champion and world ranked #2 Dustin Johnson will also be sitting on the sidelines for the first time since the ’14 Masters. Johnson started the championship with a lackluster 77 and followed -up with a two-over-par 72. Early on there was talk from Johnson about pushing himself ahead of Day to gain the top ranked position in the world for the first time in his career. Such talk will need to wait for another opportunity. Johnson simply played too many indifferent shots and for a golfer of his immense talents the wherewithal to have competed for the Wannamker Trophy at Baltusrol could have been a solid opportunity given the course’s relentless need for solid driving. The golfer who won at Oakmont was clearly absent this week.

Baltusrol Golf Club sustained a total of 1.1″ of rain overnight and into Friday morning. None of the 20 PGA Club Professionals in the field made the cut. Pop-up t-storms will be in play throughout the weekend rounds. The final pairing of Walker and Streb  is set to go at 2:55 PM local time.