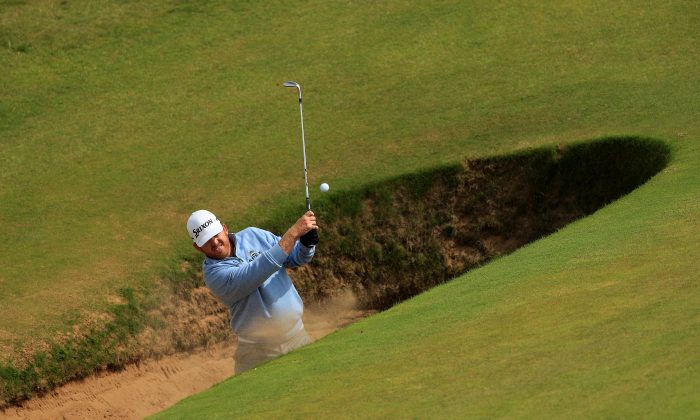 JB Holmes of the United States hits a bunker shot on the 8th during a practice round ahead of the 145th Open Championship at Royal Troon on July 12 in Troon, Scotland. (Mike Ehrmann/Getty Images)
Golf

TROON, SCOTLAND—There is nothing more disheartening for a world class professional to be embarrassed on the grandest stages of championship golf and to have that happen on a hole which on first appearance should be a relative pushover to play.

This year’s Open Championship features the diabolical par-3 8th—otherwise known as the Postage Stamp. The hole is one of the finest of its kind and deserves no less billing with such famous holes as The Road Hole at The Old Course at St. Andrews and the par-5 17th at Muirfield, to name just two others. The placement of the 8th at Royal Troon is well-positioned. Players generally can get off to fast starts at Troon and the 8th comes before the turn back to the clubhouse begins.

The 8th is the shortest hole played in the rota of courses used for The Open but do not be fooled for a minute that shortness means weakness. Quite the contrary. The Postage Stamp is played from an elevated tee and the green sits down below with no more than 10 yards across. There is also the devilish winds that can change both direction and velocity at any moment.

Originally called “Ailsa” because of the views of the rocky inlet near its location, the present tagline is attributed to William Park writing in Golf Illustrated said, “A pitching surface skimmed down to the size of a Postage Stamp.”

The green is long lengthwise but actually narrows the deeper into the green one goes. There is an abutting sandhill to the left and the green is well fortified with no less than five bunkers fiercely awaiting the misplayed or hapless play. The bunkers, like many in Open Championship play, are deep and can prove to be extremely vexing for anyone that finds them.

Amazingly, the hole has had its moments in glory. In 1973—playing in his final Open Championship 51 years after winning his lone Claret Jug—was Gene Sarazen. The Squire demonstrated one final curtain call with great panache, acing the Postage Stamp with a 5-iron in the first round and then the very next day finding one of the greenside bunkers and blasting his ball in the hole for a birdie.

The club motto clearly applies when playing the hole: “As much by skill as by strength.”

The R&A will have a “wire camera” running the length of the hole. The aerial perspective will be a fantastic way for viewers to more fully appreciate the character of one of the greatest short holes in all of golf. There will also be cameras in each of the five bunkers to give even more awareness of what the world’s best players will encounter.

For world class golfers, the shock in playing such a short hole comes from the realization that birdies should be plentiful but just as likely the slightest bit of miscalculation or failure in executing can result in scores of double-bogey or worse. The par-3 8th at Royal Troon will certainly play a pivotal role in what golfer cradles The Claret Jug at the end of the Championship.