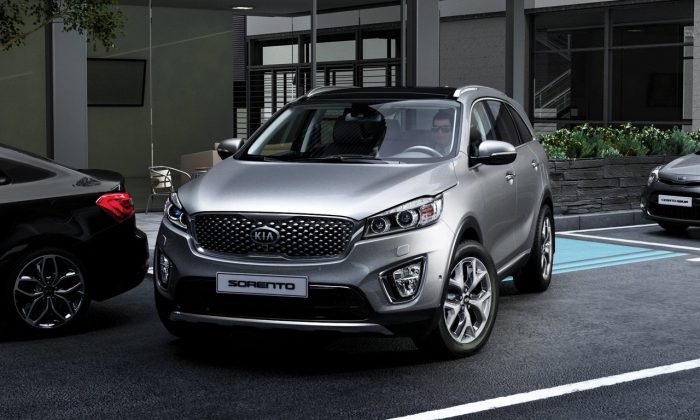 Kia has redone its award winning (J.D. Power 2015 IQS) mid-sized Sorento crossover for the 2016 model year. The consensus—Kia has done a masterful job in updating its popular SUV from the standpoint of styling, performance, technology and interior enhancements.

The new Sorento has a 3-inch longer wheelbase, it’s slightly wider, and it’s a bit lower. Overall, it looks sleeker, the hood looks longer and it actually appears lower than the one half-inch that Kia claims. The front end is more aggressive, the tiger grille seems taller. Its quad diode fog lamps are very distinctive and are becoming the face of the brand, never mind the grille.

The interior has also been reworked as Kia tries to lift it into the ranks of premium utility vehicles. Occupants will get a positive tactile experience with the soft touch surfaces especially the instrument panel, center console, and door panels. The door grips are so soft they feel padded.

The new Kia comes in five trim levels starting at $25,795—L, LX, EX, SX, and SX Limited, two-or three row seating configurations, and with three engine choices including one new for 2016. Standard in the L and LX is the 2.4 L 4-cylinder that produces 185 hp and 178 lb-ft of torque.

Oddly, the third-row seat is not available with the turbocharged engine. But all-wheel drive can be added to any trim level or engine configuration for $1,800.

We’ve driven the V6 in years past and found it among the class leaders in performance. And we’ve experienced the base 4-cylinder and found it adequate for light duty, but lacking if hauling several passengers and/or cargo.

We discovered that the new turbocharged four is a perfect fit between the base 4 and V6 possessing the needed power to adequately move the Sorento when loaded, but with better gas mileage than the V6.

We were impressed with the way the Sorento handles the mean streets of the city as well as the curving and rolling rural blacktops. The 4-cylinder turbo smartly moves the crossover off the line and has enough reserve power to easily pass slow moving traffic on a two-lane. The steering feels connected and the suspension strikes a nice ride/handling balance even on the worst streets.

The Sorento’s UVO system continues to be improved and can be loaded up with the latest infotainment technology including the Clari-Fi audio which rebuilds sounds that are lost as music is compressed for digital storage.

Occupants will get a positive tactile experience.

In other words it will read the sound that is there and reconstruct the sound that got lost. The first application in a motor vehicle, Kia said the sound was cleaner, crisper, wider and more dynamic. We found it impressive with clear highs and lows

The 40/20/40 split second-row seats can fold, slide and recline for long-distance comfort. The outboard second-row seats are heated on the top SX Limited trim. Maximum cargo space with all seats folded is a decent-for-the-segment 73 cu ft.

There is 11.3 cu ft of storage behind the third row and if your Sorento comes with just two rows, storage in back is a healthy 38.8 cu ft. We discovered the third row is strictly for children, not for hauling adult passengers.

While standard safety amounts to the usual items—anti-lock brakes, traction and stability control, and a full complement of airbags—the Sorento can be loaded up with safety features for a price. A backup camera is standard on all but the L and LX models.

Those features were included on out test vehicle in a $2,500 Technology Package. Our Limited with the turbocharged engine, all-wheel drive and the Technology package carried a bottom line of $45,095.