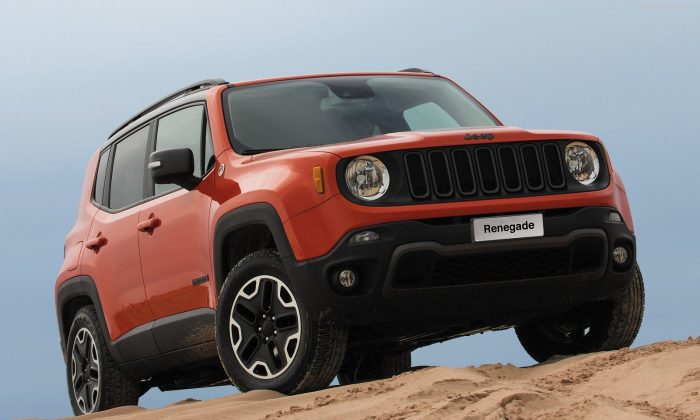 A small SUV with a big heart, the Jeep Renegade upholds the family name. Yes, it’s built in Italy and shares many components with its kissing cousin the Fiat 500X, but Jeep managed to bake enough of its well-tested off-road engineering into the mix to put Renegade at the head of its class in capability.

Think of the Renegade as that sassy, care-free youngin with a tattoo or two and a nose piercing that shows up a little late to Thanksgiving dinner with a bottle of cinnamon tequila for holiday shots. Rowdy, fun, and ready to party, Renegade is just a tad irreverent. It looks every bit as at home in its Omaha Orange, Solar Yellow or Commando (Army-tank green) skin as it does in more traditional white, sand, and red.

Pricing begins at a respectable $17,995 for the entry-level Sport grade and accelerates to $25,995 for the top-of-the-line Trailhawk. My test Renegade was the $21,295 Latitude version. Adding 4WD tacked $2,000 to the bottom line. Another $1,340 in option packages brought the total retail of my Renegade to $23,295 before adding the $995 factory delivery charge.

My test Jeep came with the base 1.4 L turbocharged 4 L engine. It puts out 160 hp and 184 lb-ft of torque. This is the engine that powers the Sport and Latitude models. A 6-speed manual transmission hustles engine output to the wheels. A $1,400 option on those two grades, but standard on the Limited and Trailhawk trims is a 2.4 L 4-cylinder married to a 9-speed automatic transmission. It generates 180 hp and 177 lb-ft of torque.

Renegade is eager and surprisingly athletic.

Just as there isn’t a lot of daylight between the performances of Renegade’s two engines, mileage is relatively the same, too. FWD versions with the 1.4 L engine deliver 24 mpg city/31 mpg highway and 27 mpg combined. With the 2.4 L, the city and combined mileages drop by 2 mpg. Adding 4WD doesn’t affect the 1.4 L mileage. The 2.4 L 4WD fuel economy drops to 21 city/29 highway/24 combined.

Even with the added weight of 4WD, Renegade is eager and surprisingly athletic. Handling well on the highway, it dodges in and out of traffic with jackrabbit quickness. Acceleration is satisfying enough and it corners without much in the way of drama. The ride is on the firm side, but not uncomfortably so.

Not taking itself too seriously, this small Jeep has little styling cues—Easter eggs—scattered around the interior, like the mud splash on the tachometer. No one will call this cabin spacious, but neither is it cramped. Three adults will fit across the second-row seat. Tidy with some exterior color accents placed here and there, the interior is stylish and comfortable. Three large round knobs in the center stack control the climate system. Above them lurks the touch screen for whichever Uconnect audio system is selected.

As you continue on up the trim scale additional goodies like dual-zone automatic climate control, a 115 V household-like power outlet, leather seating and an even more inclusive Uconnect system with a six-inch touchscreen become standard.

This spunky little mover provides everything expected in a compact SUV, as well as some serious off-roading creds. It does the Jeep name proud.