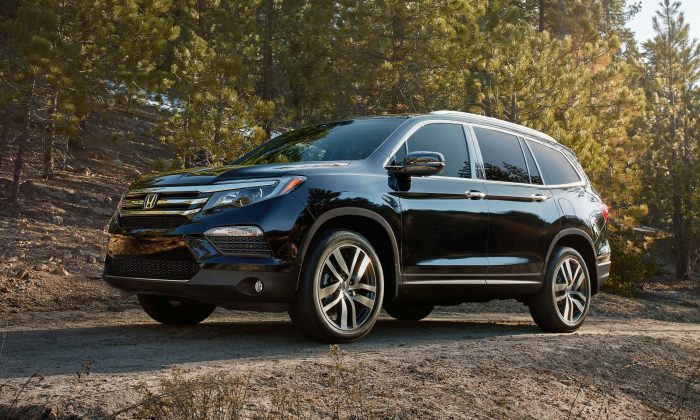 The fact that the 2016 Honda Pilot shares its platform with the award-winning Acura MDX crossover may be all you need to know about the first all-new Pilot in seven years, but diving deep into the new mid-sized crossover’s attributes—from technology to safety to comfort—reveals a family-friendly vehicle that will put it back in the conversation when discussing which is the best full-sized family crossover in North America.

With an infusion of style, refinement, modern safety, and infotainment technology the new Pilot which now looks more like its smaller sibling—the CR-V than a two-decade-old Land Rover has now vaulted to the head of its segment.

While retaining its vaunted reliability, roomy interior, and family-friendly features the new Pilot is slightly larger gaining 1.8 inches in wheelbase and 3.5 inches in length and at the same time it’s slightly lighter by as much as 286 pounds.

The Pilot is again powered by a 3.5 L V6, but it’s a new direct-injection version that operates on regular gas and now displaces 280 hp and 263 lb-ft of torque, an increase of 30 ponies and nine more lb-ft. You can feel it too, especially on the higher trim levels (Touring and Elite) which get a new 9-speed automatic transmission with paddle shifters and an automatic stop/start system. The bottom three trims (LX, EX, and EX-L) are equipped with a 6-speed automatic, but even that’s a step forward over the outgoing model which lived with a rather outdated 5-speed shifter.

This translates into improved performance in real-world driving. The Pilot possesses a light and agile feel willing to tackle merges onto an interstate highway and equipped to do quick passing maneuvers around slower traffic on rural, winding two-lane roads. This new urgency is measured by 0-to-60 times in the lower reaches of 6 seconds and quarter mile times of around 15 seconds. That’s nearly two seconds faster off the line than the 2015 Pilot.

Probably more importantly to most people is gas mileage, and that, too, has significantly improved, now EPA-rated at 20/27/23 for the 9-speed. Not much is lost with all-wheel drive mated to the 9-speed at 19/26/22. One other thing, when properly equipped the front-driven model can tow 3,500 pounds and with AWD, 5,000 pounds.

The Pilot is solid, drives smaller, and feels less cumbersome than the outgoing vehicle thanks in part to the weight loss, a stiffer structure, relatively precise steering from the new electric setup, and help from the optional “torque-vectoring” all-wheel drive. But this is still a big SUV so don’t expect sports-car-like handling. What you can expect is a suspension system that offers a pleasing ride soaking up road imperfections like a dry sponge on a spilled drink.

The Pilot can be configured as a 7-passenger vehicle with second-row captain’s chairs or as an 8-passenger hauler with bench seats. A special feature is second-row seats that tilt and slide forward with the push of a button to allow access to the rear. But the pass-through is still small and access to the back seat is best left to the younger and more athletic members of the family. Once ensconced in the rear, passengers will find decent leg and head room.

Interior quality is excellent with soft-touch surfaces virtually everywhere including the dash and door panels. The gauges are clear and attractive and the infotainment system, navigation, and climate controls are intuitively operated through the 8-inch touchscreen. Thankfully, climate controls can be accessed without the screen and are easy to use. On the other hand, we wish Honda would include a traditional volume knob for the audio system instead of the aggravating touch-activated control.

Honda preaches safety, and it offers a suite of cutting-edge equipment—for a price. Honda offers the requisite safety items across the lineup featured by virtually all manufacturers including antilock brakes, traction and stability control, front and side curtain airbags, and a rearview camera. But while a driver’s side blind spot monitoring should be available on all vehicles in this price category, it is only offered on the top trim Elite. The Honda Sensing package, available on several trim levels, includes forward collision warning, forward collision mitigation with automatic braking, road departure intervention, and lane departure warning. Also available on higher trim levels are the Honda LaneWatch blind-spot camera, rear parking sensors and adaptive cruise control.

The Pilot starts at $30,875 including destination charge for the front-wheel-drive LX and rises to Elite with AWD, navigation and rear entertainment for $47,300. That was the price of our test vehicle.