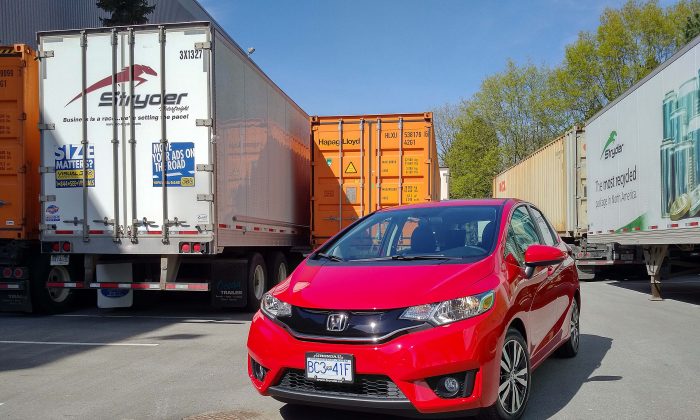 Completely redesigned last year, the practical and sporty Honda Fit continues to make its mark in the 5-door subcompact segment and winning awards along the way.

Receiving the 2016 Editors’ Choice accolade from Car and Driver, which praised the roomy interior, cargo-carrying ability, fuel economy, and handling, most journalists, myself included, would agree wholeheartedly with the publication’s assessment.

The hatchback is one of my favourite form factors because of its versatility. It can squeeze in five passengers somewhat comfortably, the rear seats fold down (more on this later), and it plain looks great. The headlights are now integrated with a blacked-out front grille.

A neat feature that warrants mention is the Magic seats.

There are diffusers on both bumpers which, coupled with the bigger 16-inch alloy wheels (EX and EX-L), help swap a few points from the cute category over to sporty. If you stand back and squint, it kind of looks like a stocky bulldog sitting on its haunches.

A lot of automakers are finding unique ways of creating more with less when it comes to size. For example, the 2016 Fit is actually 40.6 mm shorter than the outgoing model while only being 7.6 mm wider.

That’s why I found it surprising that rear legroom for passengers has been increased by 122 mm. That is thanks to the engineers who played around with the architecture, made easier by a fuel tank that has been relocated to the middle of the vehicle.

A neat feature that warrants mention is the Magic seats. In one of Honda’s promotional photos, it shows a woman lounging in the back with her legs stretched out onto the front seatback that’s been folded flat.

There are a variety of seating positions that can be achieved for comfort, or for cramming in more stuff—1,492 L worth with the second row laid down.

Of course the performance aspect of the new Fit wouldn’t be left alone. Power output increased by 13 hp and 8 lb-ft to 130 hp and 114 lb-ft, respectively. If previous versions were any indication, the transmission of choice would be the manual, which is now a 6-speed.

My EX-L press vehicle came with the continuously variable transmission (CVT) option (+$1,300) that despite improvements in technology is still noisy and a bit whiney during acceleration.

There are paddle shifters included that can help you simulate gear changes if you so choose. There’s also an Eco Assist button that you can activate that will moderate engine, transmission, and other vehicle systems to help maximize fuel economy, but be wary that it will obviously impact the feeling of performance as well.

Fortunately, the Fit still retains some of the toss-able feeling that the nameplate was famous for.

A press release says it “benefits from the most extensive use of ultra-high strength steel in the model’s history providing increased body stiffness while reducing platform weight by about 26 kg.” It definitely feels solid on the road and handles well with adequate response from the electric steering system, but in my opinion it doesn’t quite fully capture the go-kart feeling of yesteryear.

The 2016 Honda Fit is manufactured in the company’s new Celaya, Mexico plant.

Benjamin Yong is a freelance writer from Vancouver, B.C. and a member of the Automobile Journalists Association of Canada (AJAC). Follow him on Twitter at twitter.com/b_yong