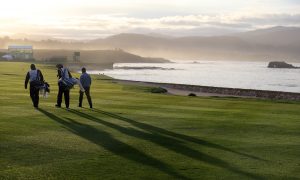 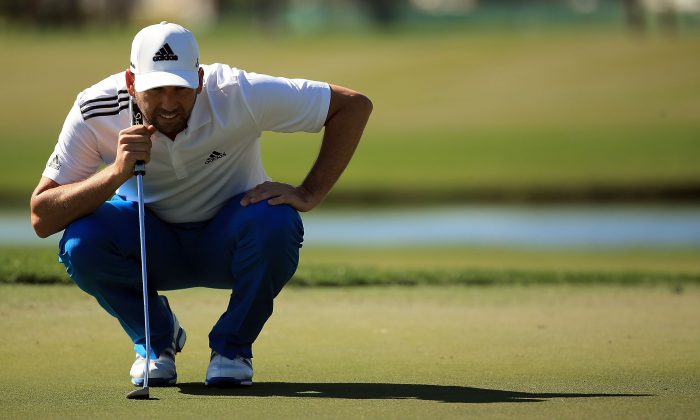 Sergio Garcia lines up a putt on the eighth green during the first round of the Honda Classic at PGA National Resort & Spa - Champions Course on Feb. 25. (Mike Ehrmann/Getty Images)
Golf

Palm Beach Gardens, FL—Since 1999, when a then 19-year-old youngster leaped onto the world professional golf stage battling Tiger Woods down the stretch for the PGA Championship at Medinah, many experts within golf forecasted the talented Sergio Garcia as the next great Spaniard—building on the legacies of fellow countrymen Seve Ballesteros and Jose Maria Olazabl. That same year Garcia became the youngest ever participant in making the European Ryder Cup team—an accomplishment neither Seve nor Jose Maria attained.

In 2001, Garcia claimed two PGA Tour titles at age 21—the youngest since Tiger Woods had done so in 1996 when 20. Few players had shown such a “can’t miss” equation for total stardom and it was agreed by nearly all that major championships would be in Sergio’s immediate future.

Fast forward to 2016 and the total number of majors Garcia has won remains at zero. That’s right. Goose egg. The much believed promise has waned considerably, and for Sergio the search to validation remains an ongoing battle. During his career Garcia has demonstrated a range of emotions—sometimes petulant—sometimes withdrawn because the favored bounce and roll of the putt has gone to another player leaving Garcia always on the short side of key events. What many may not realize is that Garcia has played in 67 consecutive majors—the longest streak among active players.

Sergio’s career has not been without its moments. He has won eight times on the PGA Tour with a ’08 win at the prestigious Players Championship on his resume. His talents have also claimed 11 wins on the European circuit along with 10 other wins globally. Garcia is a seven-time member of Team Europe in The Ryder Cup Matches and has accumulated 20.5 points in that period. Each time Sergio has played the European side has been victorious. It is very possible when Garcia’s Ryder Cup career ends he may have earned the most points by any player who has played in the Matches.

For just about any other golfer, such accomplishments would be especially noteworthy. But more was expected of Garcia. Lasting greatness is etched in stone through the wherewithal to play one’s best golf during the four major championships each year. Garcia has come close with four runner-ups and a total of 10 top 5 finishes. Watching Garcia miss a critical 8-foot par-putt on the 72nd hole at Carnoustie at the ’07 Open Championship that would have garnered his first major might have been the catalyst to propel him to an upper echelon of players. The putt came close but refused to drop and relegate him to an aggregate playoff against Padraig Harrington which he lost by one stroke.

At this year’s Honda Classic, Garcia has once again thrusted himself into the conversation, even after failing to make the cut at last week’s Northern Trust event in California last week. With the Honda being only his third start in ’16, he stands just two shots off the lead of Rickie Fowler at the halfway point. Garcia has always shown a capacity to play some of golf’s most demanding tests well. The Champion Course at PGA National is especially daunting—water creeps into play at a number of holes and when the wind does blow the need for crisp, consistent shot-making is a must. His first two rounds—65-69—have been masterful in terms of control of the golf ball and the only real blemishes on his scoring have come from just two bogeys.

Throughout his career Garcia has always been a top notch driver of the ball—above average length and uncanny accuracy. For Sergio the albatross has been an inconsistent putter—failing to make critical putts that can provide the needed separation. Amazingly, players such as Ballesteros and Olazbal showed in numerous occasions a high proficiency in playing the most delicate of shots and being able to finish off holes with a much needed putt when circumstances dictated.

At 36 years of age now, Garcia is far from finished in adding to his career and in showing even the most dogged of critics he still has the game to win majors. The clock is clearly ticking for Sergio. The emergence of a new generation of young players with the likes of Jordan Spieth and Rory McIlroy leading the way has clearly signaled a new era is now upon us. Fortunately, for Sergio, golf balls and clubs don’t know how old you are.

The final two rounds here at The Champion Course will show plenty—whether Sergio has the inner strength to push through and show he more than able to reach the pinnacle of the competitive mountain. Augusta is calling in just a number of weeks and Garcia would thoroughly enjoy adding his name to that of his fellow countrymen like Ballesteros and Olazabal who have won multiple green jackets.

For Garcia the battle is one that forces him to battle his inner emotions—sometimes much more so than the competitors he faces. He has not won on the PGA Tour since claiming The Wyndam Championship in August ’12. This weekend Garcia will see a young face like Fowler’s leading the way. In 1999, Garcia was the youngster who showed a real zest for the game—a future that looked so promising. Garcia can still prove his doubters wrong. This weekend playing such a demanding test like The Champion Course will go a long ways in showing how much fuel Sergio has left in the tank.