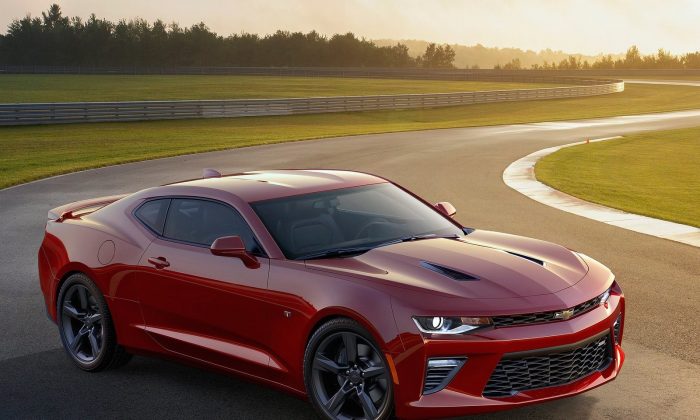 2016 Chevy Camaro Is Lighter, Sleeker, and Ready For Action

The virtually all-new 2015 Ford Mustang is one heck of a great car, which left enthusiasts wondering if Camaro’s winning sales streak could continue. Well, wonder no more, because Chevrolet has delivered an entirely new pony car of its own. You’ll know it instantly as a Camaro, but everything else is completely new.

“We have had the incredible opportunity to meet literally thousands of Gen 5 Camaro owners who provided direct feedback on what they loved about their car and what they wanted for the next-gen Camaro,” said Al Oppenheiser, Camaro chief engineer. “As a result, the 2016 Camaro builds on what made the current Camaro such a success with more power, more agile handling and more technology. We expect it will set the new benchmark in the segment—and give a new generation of enthusiasts a reason to fall in love with Camaro.”

“From every angle, you’ll never mistake this for anything but a Camaro,” said Tom Peters, design director. “We’ve taken that iconic design and amplified its proportions to reflect a more dynamic driving experience—like the T-shirt on a muscular physique.”

Apt description. As with the Corvette Stingray, body panels and hood look more sculptured, tighter, and dynamic to give Camaro a more athletic stance. GM claims the car spent 350 hours in the wind tunnel to reduce drag on LT models and increase downforce on high-performance SS editions. LEDs give the lights a signature look with light blades on SS. Overall, the car looks very nice, but is not as dramatic as some might have hoped. Then again, why mess with a basic design that’s endured so well?

There’s no question this will be the best Camaro yet.

Interiors are also an evolution of the outgoing model. More dramatic surfacing on the dashboard, improved seat design, and large flat-bottom steering wheel are quite sporting. There are also higher quality materials and innovative control rings placed around the air vents for temperature and fan speed adjustments. A new touchscreen in the center console and 8-inch screen between analog instruments allow easy control of infotainment. LED ambient lighting in the dash, doors, and center console can be adjusted among 24 colors or set for transition, fade, and show car affects.

Powertrains lead off with a 2.0 L turbo-four that delivers 275 hp, 295 lb-ft of torque, 0-60 mph in less than 6 seconds, and over 30 mpg highway (exact MPGs pending). There’s also a more potent 3.6 L V6 pumping 335 hp. Variable valve timing and cylinder deactivation technology enhance fuel economy. And, if that doesn’t make you giggle, Camaro SS packs a 6.2 L V8 with 455 hp and 455 lb-ft of torque—the most ever for Camaro SS. All three engines can be paired with an 8-speed automatic or 6-speed manual transmission, the later with rev matching on SS.

Engineers claim the new car is 200 pounds lighter, primarily due to a switch from the Chevy SS’ Holden-developed platform to the more trim Cadillac ATS architecture, itself well-known for spry handling. A fully-independent suspension works in conjunction with available Drive Model Selector (adjusts powertrain, steering, and chassis for Snow/Ice, Tour, Sport, and Track) and on SS models, Magnetic Ride Control that electronically adjusts the suspension stiffness in real time. All of this and a slightly smaller size should transform Camaro from a large four-seater to a much sportier ride.

The friendly rivalry between Ford and Chevy delivered two world-beating sports cars for which both automakers should be proud. Mustang will be a tough act to follow, but Camaro is clearly up to the challenge.

Considering the aggressive exterior, upgraded interior, efficient powertrains, and re-developed chassis, there’s no question this will be the best Camaro yet. Perhaps best of all, Camaro comes home as production transfers from Ontario to the Cadillac plant in Lansing, Mich. Look for it in showrooms later this year, beginning around $25,000.