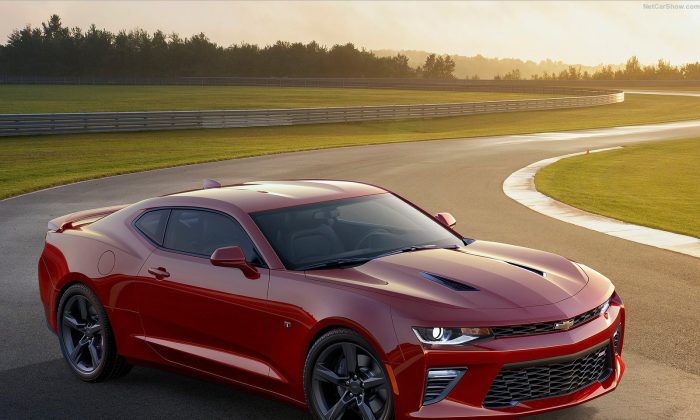 Shortly after the Chevrolet Camaro hit the streets in September 1966 as a 1967 model it was transformed into a muscle car outfitted with Chevy’s 4.9 L V8, designed to do battle with the spectacularly popular Ford Mustang—and so the aptly named pony car wars were born. Mustang and Camaro were soon joined by other sporty, performance-oriented entries such as the Pontiac Firebird, Plymouth Barracuda, and Dodge Challenger.

The Camaro—as well as the Mustang and Challenger—still sport incredible muscle, the kind of V8 power only dreamed of even in the glory days of the original muscle car craze. For instance, the new sixth-generation 2016 Camaro can be outfitted with a 6.2 L V8—coming straight from the Corvette—making 455 hp and with the capability of a 0-to-60 time of 4.0 seconds and a quarter-mile time of 12.4 seconds at 115 mph.

The difference between 1967 and today is that the Camaro is about much more than straight ahead tire-shredding performance. It has obviously got that in spades, but it has also become an incredibly well-rounded sports car with three engine options, the handling of a true sports car in the image of Corvette, and gas mileage not even considered possible in the last century.

The squared, brick-like styling of the fifth-generation Camaro (2010-2015) has been streamlined with a more aggressive front end and a restyled tail. The 2016 model looks more finished, refined and, more appealing than the outgoing model. It’s actually slightly smaller in every dimension—including more than 200 pounds lighter—than the outgoing car (2.3-inch shorter and eight-tenths of an inch narrower with a 1.6-inch shorter wheelbase).

The Camaro is about much more than straight ahead tire-shredding performance.

Although built on GM’s Alpha platform that is also used by the Cadillac ATS, approximately 70 percent of the architectural components are unique to Camaro. Through extensive computer-aided engineering, structural rigidity was increased by 28 percent, while the body-in-white mass was reduced by 133 pounds.

The big news is under the hood where you can choose from a lightweight 2.0 L turbocharged 4-cylinder that gives Camaro an appealing blend of performance (0-to-60 in 5.4 seconds) and gas mileage of 22 city, 31 highway, and 25 combined. The performance-oriented 3.6 L V6 with 335 horses can spirit from 0-to-60 in true muscle-car fashion measured at 5.1 seconds and there’s the brutish V8 that we tested in an SS trim mated to an excellent short-throw 6-speed manual.

For the majority, who today would rather partake of an automatic transmission, all three engines come with GM’s newest 8-speed shifter with steering-wheel mounted paddle shifters.

The standard 6-speed manual that comes with the V8 features new Active Rev Match technology that blips the throttle for perfectly timed downshifts, making even the novice driver look like a veteran race car driver. Our Camaro SS exhibited excellent handling and great balance on our usual winding back-road test track giving us the feeling we were behind the wheel of a new Corvette. It was a hoot to downshift, we loved it.

Inside, Chevrolet has integrated the tachometer, speedometer, and central driver information screen into one complete group for a cleaner, more modern look. Most of the switchgear is intuitive, but storage space up front is virtually non-existent. The cupholders were lifesavers being put to use not only for drinks, but for cellphones and the other paraphernalia of driving.

We found the front seats comfortable, but after squeezing two adults into the rear for a too-long trip, we cannot recommend the Camaro for more than two occupants unless it’s for very short jaunts. And we wish the 2016 redesign had increased the greenhouse, but the Camaro remains outward-visibility challenged with a high beltline and a low roof. The interior can give you a claustrophobic feeling.

The Camaro is available in four trims—1LT, 2LT, 1SS, and 2SS—starting at $26,695 (convertibles start at $33,695) for a turbocharged four with manual transmission. The coupe moves up through the pricing ranks to $43,790 for the 2SS with automatic transmission. Our 2SS test car with a few options including magnetic ride control ($1,695) and dual-mode performance exhaust ($895) carried a bottom line of $46,095 including destination charge.

Standard safety features on all Camaros include antilock disc brakes, traction and stability control, a full array of airbags, the OnStar telematics system that includes automatic crash notification and on-demand roadside assistance, and a rear backup camera. Very important in our estimation is a blindspot monitoring system, but unfortunately it is standard on only the 2SS, and with a bundled $2,800 option on 2LT models.