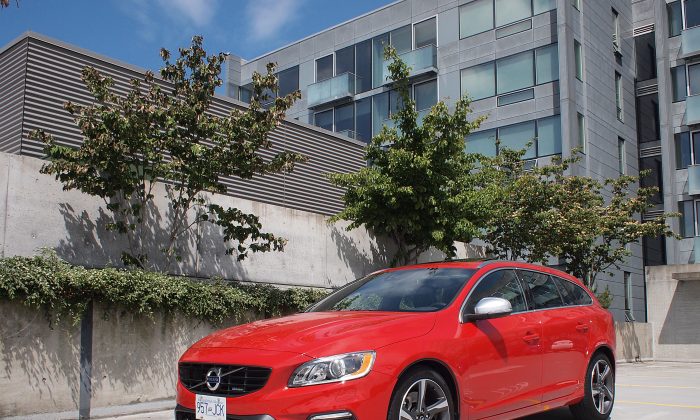 Volvos and wagons go together like, well, you fill in the blanks. For the better part of a half-century, the Swedish manufacturer has been a champion for one of cardom’s most beloved form factors. Though a lot less boxy than earlier examples like the 245 or 740, the 2015 V60 still embodies the same spirit that made them so popular in the first place. And it also happens to be the fastest production wagon the company has ever built.

Essentially the more practical version of the S60 sedan, I spent a week in the quick T6 R-Design variant. It looks fantastic featuring a hunkered-down stance, big 19-inch wheels, and a sleek, frameless, Tech Matte Black grille with the signature R-Design emblem nestled inside. A black “aero fin” swoops up from below the fog lamps meeting in the middle beneath the grill, that is paired with another fin that forms the rear under-bumper diffuser housing twin exhaust tips.

The racy R-Design theme continues in the interior as well. New perforated nubuck leather sport seats are among the most comfortable I’ve ever sat in. There is some light bolstering to keep your hips and shoulders snug, but not over-the-top like certain Recaros that can make some people feel claustrophobic. It also has the same Adaptive Digital Display found in other models within the lineup allowing drivers to choose between Elegance, Eco, and Performance themes, each displaying a different set of colours and information. Volvo’s impending touchscreen control setup hasn’t graced the V60 quite yet—the wagon retains the familiar keypad layout.

As I touched upon earlier, the V60 is quick. Featuring the same 3.0-liter turbocharged six cylinder engine as in the sedan, it has been tuned with Polestar software creating 325 horsepower and 354 lb.-ft. of torque at a very low 2,100 rpm giving it a ton of low-end grunt. Channelling that power is the standard six-speed Geartronic automatic tranny with Sport mode. For the first time, Volvo is experimenting with paddle shifters with Quick Shift technology that is supposed to improve shift times by 30 percent. Flicking the paddles does incur lightning-fast changes, but I still felt that the loaded R-Design felt more sluggish than the S60 T6 I drove earlier, perhaps due to the extra 198-odd pounds it’s packing.

All T6 V60s are only available with the Haldex all-wheel drive system with Dynamic Stability and Traction Control. Try as I might, I never got the car to lose grip, although there is a sport mode you can activate that disables the anti-tire spin function. Compared with the standard V60, the suspension on the R-Design has been lowered by 0.6 inch with a 15 percent stiffer spring configuration that does make a noticeable difference in turn-in response and cornering at higher speeds.

All the modern safety features are in place to keep occupants safe, like the available Blind Spot Information System package that includes Cross Traffic Alert and Lane Change Merge Assist. New, is Pedestrian and Cyclist Detection that scans the area ahead and automatically applies the brakes if it detects a person or bicycle suddenly darting in front of the car.

The 2015 Volvo V60 R-Design retails for MSRP $45,150 and is worth every penny if you’re looking for a fun, fast, do-it-all mode of transport. If budget or CO2 emissions are of concern, the FWD Drive-E trim with a 2.0-liter turbocharged inline-four starts at a much more reasonable $35,750.