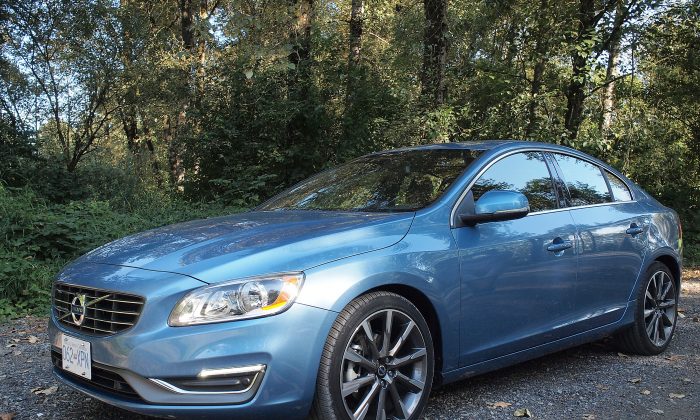 It’s understandable if you think the “E” in Volvo’s fuel-efficient Drive-E models stands for electric, … well, it doesn’t. Unfortunately, there’s no official word on what it actually means, but let’s go with economy. Because that’s the underlying feature of the new 4-cylinder powertrains designed to reduce pain at the pump while still offering output levels normally associated with a bigger engine.

Drive-E is available in one form or another across the entire ’15 model year lineup. I evaluated the S60 with the T5 motor. When you look at the exterior of the car, you’d be hard-pressed to point out any differences over the conventional version of the sedan. It possesses the same changes from last year’s “largest single refresh in Volvo’s history,” such as the wolf-inspired front headlamps, wider grille, and signature daytime running lights.

Who’s to say you can’t have efficiency and fun at the same time?

The interior received some minor improvements as well, including a revised headliner, polished metal accents, and for 2015, a neat piano black automatic gearshift knob that is backlit. My press car came in the Platinum trim level so it came with lots of extras like paddle shifters attached to a thick, grippy steering wheel, plush leather sport seats, backup camera, and a great-sounding premium sound system.

The $1,350 Climate Package was also included, adding the heated treatment to the steering wheel, windshield washer nozzles, and rear seats. The front windshield is electrically heated too, great for combatting foggy windows, but the tiny defroster wires might drive you crazy as soon as you realize they’re there.

Let’s talk a bit about the vehicle’s heart that beats beneath the hood. Canadians get a choice of two Drive-E variants: My S60 T5 had the 2.0 L, direct-injection turbocharged 4-cylinder. The more powerful T6 has a mill utilizing both a turbo and a supercharger at the same time.

The design philosophy behind Drive-E isn’t solely focused on the number of cylinders. Approximately 100 pounds has been shaved off the engine itself, heating and cooling have been optimized, and internal friction throughout the engine has been reduced. A new quick-shifting 8-speed automatic transmission replaces the 6-speed, and works with the ECO+ functionality activated via a button in the centre console panel.

With ECO+ on, at speeds over 65 km/h and the accelerator released, the transmission automatically disengages and engine speed drops to idle allowing “ECO-coast” to use forward momentum to keep the car moving.

At the same time, an auto start/stop system also comes to life that switches off the engine momentarily at speeds under 6 km/h when the driver’s foot is on the brake. An auxiliary battery helps decrease the load on the primary battery during the repeated start-up cycles.

Even with all this fuel-saving technology, at the end of the day the S60 can still be considered a driver’s car. There’s 240 hp on tap; stiff, capable suspension; and optional 19-inch “BOR” alloy wheels wrapped in 235/40/R19 tires. Weight is kept to a respectable 1,557 kilograms. It is 2015, after all, and who’s to say you can’t have efficiency and fun at the same time?

Benjamin Yong is a freelance writer from Vancouver, B.C., and a member of the Automobile Journalists Association of Canada (AJAC). Follow him on Twitter at twitter.com/b_yong