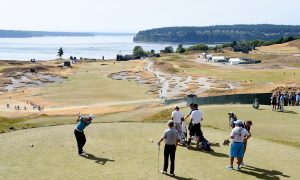 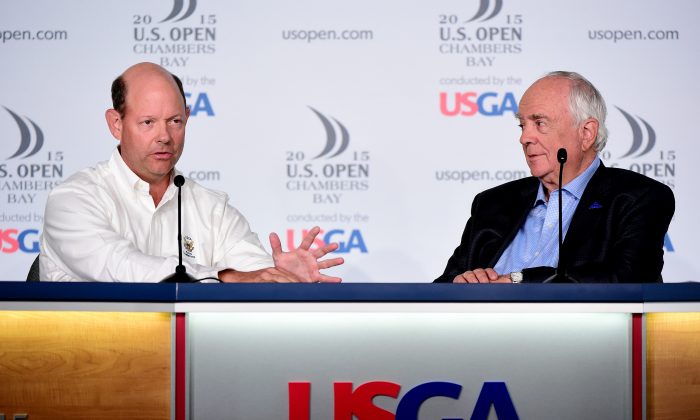 University Place, WA—With Chambers Bay being a completely new site for this year’s 115th U.S. Open Championship, the main focus for players is what kind of course set-up they will encounter each day. Chambers Bay can play in excess of 7,800 yards but will likely range anywhere from 7,200 to 7,600 yards with a par of 70. The layout opened in 2007 and while a U.S. Amateur was played here in 2010,the course has gone through some additional tweaking in preparation for the first round action.

The spotlight will shine brightly on the United States Golf Association’s (USGA) Executive Director Mike Davis. It’ll be especially bright given the fact that Davis will be the point man in setting up the golf course with a 300-feet of elevation change—the most ever for a U.S. Open site—and that the greens and all grasses are a fescue surface—the first time for that—and that the putting greens provide an array of vexing contours with ample twist and turns and sizes.

With the usage of fescue grass the USGA is seeking to achieve the preferred “fast and firm” conditions they desire for their grand event. Such conditions provide for an added element that players must consider when hitting shots at any hole: what will the ball do when it lands? How much of a bounce needs to be calculated in order to secure an easier next shot? It is that degree of uncertainty that has many players on the edge as the battle for America’s National Championship commences today.

During his tenure as the head of U.S. Open set-ups, Davis has instituted a number of positive elements. The concept of graduated rough was introduced with the ’06 event at Winged Foot. Davis wanted to insure that tee shots that finished near to the fairway were more playable than wild shots which finished further away. He also brought to the forefront the “driveable short par-4.” Such an inclusion would permit the daring player to attempt to reach a short par-4 hole with the tee shot. The gambit would not be an automatic one as various degrees of rough, hazards and even water would await the slightest miscue. The driveable short par-4 would provide another element of key decision-making for the players to handle during key moments of the championship. The driveable par-4 element will be an added element at Chambers Bay with the 12th hole—possibly with others.

Chambers Bay also provides for a range of different tee boxes to be used and for different playing angles to be included as well. Why do this matter? There is a delicate balancing act in attempting to achieve a “tough but fair” dynamic for the U.S. Open. Too much toughness can inhibit fairness. Conversely, too much fairness can fail to distinguish superior from inferior shotmaking.

Davis will confer with his colleagues regarding all of these matters but no matter the intentions, the net result will be subject to the whims of Mother Nature. If a specific wind pattern is supposed to occur and then fails or simply reverses itself, the nature of a given hole and flagstick position could elevate the degree of difficulty beyond what most players can handle—and likely accept.

Professional golfers—like many athletes—have frail egos. Being subject to embarrassment in shooting a very high number—on global television—is not something they wish to happen. Regardless of the intent from Davis, it is the outcomes that matter. The agenda for the USGA is one thing, for the players it is quite another. Fairness is a matter of where one sits and it determines where one stands on the topic.

At the ’04 U.S. Open at Shinnecock Hills on eastern Long Island, the USGA mandated less water usage for the putting surfaces for the weekend rounds, and, as a consequence, the greens simply wilted and the players rightly howled. Balls would not stop no matter how careful the stroke and the players fumed in watching balls run by and make the U.S. Open more of a miniature golf contest—save for the clown’s mouth and loop-to-loop.

Davis was confident that such a repeat episode would not happen. During a press conference briefing this past Monday he explained the various steps the USGA is taking to make sure that moisture content is measured daily and then appropriate and timely water applications are made. Nonetheless, there are situations that can arise that no organization can completely anticipate with all the measurements and back-ups in place. Should anything close to the debacle at Shinnecock in ’04 it will be Davis that will be the one being toasted for such poor decision-making and execution.

This year’s U.S. Open will also include tee boxes which are not completely level. The player will need to secure the right location and use the ground differentiation as a way to shape tee shots according to the design of the hole faced. In concept this element sounds logical, but for players who have always had near dead-flat tees when playing the results could also mark for a high degree of concern and related controversy.

Chambers Bay features putting surfaces with all sorts of rolls, contours and sideboards. In some cases players will use such sideboards to cause their balls to roll nearer to the hole than if they were to take a direct aim. On the flip side, such sideboards can also mean balls being deflected and racing into precarious positions. The degree of uncertainty is something that many professionals—accustomed to 100 percent certainty—are on edge as the U.S. Open begins.

Mike Davis in many ways is like the fabled mythical character Merlin. The head honcho for the USGA must provide enough magic that will test players to the max without pushing the boundaries in which the outcomes are geared more towards luck than skill. Davis has embraced the challenge and has said Chambers Bay will do what it must to crown a worthy champion come this Sunday, Father’s Day. The time for talk is over—now the golf awaits.

* Chambers Bay will have upwards of 40,000 people on the grounds for event. The large number will have limited sight vistas of the players as many of the holes feature high mounds that form a wall down each side of the holes. To complicate matters the 300-feet of elevation change will certainly strain the physicality of many of the people attending. In the 2010 U.S. Amateur no less than ten (10) people suffered ankle and foot injuries in trying to keep up with the play. In my experience in having covered 30 U.S. Opens, I have not seen a more demanding site for galleries to negotiate and to receive so little in terms of hole-to-hole visibility. Those situated in the grandstands—the one fronting the 18th hole—can hold in the range of 6,000 people and other grandstands will also be available and likely the wisest choice for people attending to use.