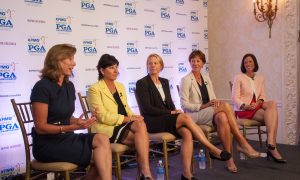 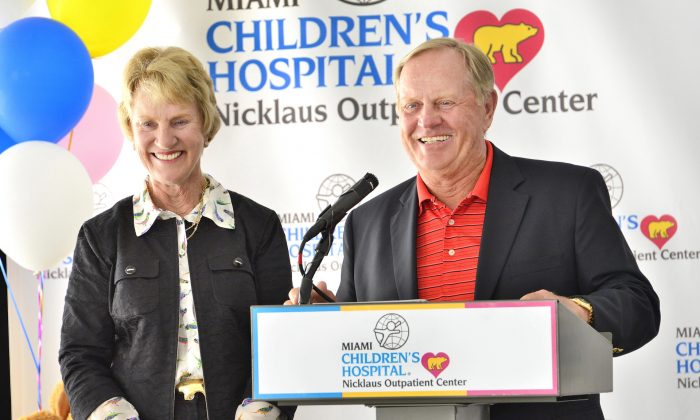 By M. James Ward
biggersmaller
Print
University Place, WA. Mention the name Jack Nicklaus and the golf memories can overload the mental circuits. Winner of 18 major championships–runner-up no less than 19 times. Without question, the game’s most stellar player. But that image has been cultivated, nurtured and strengthened considerably by a meaningful contribution from someone who has preferred to remain in the shadows. Who is it?

No less than the Golden Bear has stated many, many times the critical role his wife played and continues to play. Jack has stated his success to fully prepare for major competitions comes from what Barbara provided him and their family.

Presented annually since 1955, the Bob Jones Award recognizes an individual who demonstrates the spirit, personal character and respect for the game exhibited by Jones, winner of nine USGA championships.

Often referred to as the “First Lady of Golf, ” Barbara Nicklaus has skillfully used her influence as the wife of the game’s greatest player to generate attention for youth-related charitable causes and volunteerism.

In receiving the award, Barbara Nicklaus–along with her husband who won the same award in 1975–become the only couple to have been so honored.
Earlier this year Jack became only the seventh athlete to receive the Congressional Gold Medal and was honored by the USGA this past May in being only the fifth person to have a room named for him at Golf House in Far Hills, NJ. In both instances he saluted Barbara calling her “the guiding light of everything we’ve tried to accomplish.” “Were it not for Barbara, I would have been just another golfer,” Nicklaus said. “People have asked me to quantify Barbara’s importance in my career. I’d have to say she’s responsible for at least 15 major championships. I’ll give myself credit for three.”
When the couple married they ventured to New York City for a portion of their honeymoon. After a few days of steady rain the newlyweds headed to Atlantic City since neither had ever been to the coastal town in New Jersey. Jack, being the resourceful golfer, made a slight detour to see if playing golf at the renowned Pine Valley Golf Club could happen. Unbeknownst to the Golden Bear, Pine Valley did not have female members or allow them on the grounds. If ever a marriage was tested, her patience was on fine display as one of the staff people made it a point to drive Barbara near enough to see Jack playing those holes nearest to the periphery of the property.
One of the main elements Barbara Nicklaus is rightfully proud of is her work as chairman of the Nicklaus Children’s Health Care Foundation–providing support for activities that advance and enhance the diagnosis, treatment and prevention of childhood diseases and disorders. The foundation has raised more than $32 million since its inception in 2004 . In 2010, the foundation became the lead charity of the Memorial Tournament presented by Nationwide, a PGA Tour even founded by the Nicklauses in 1976 with the intention of giving back to local charities in the greater Columbus, OH area as one of the event’s primary objectives. To date the event has generated more than $23.5 million in donations to Central Ohio charities, including more than $13 million to Nationwide Children’s Hospital in Columbus, OH.
Related Coverage

Park(ed) at the Top of the Hill
Barbara Nicklaus’ involvement as co-chairperson for the charity that organizes The Honda Classic on the PGA Tour has also benefited the foundation. Funds generated through the event in Palm Beach Gardens, FL, have been instrumental in opening the Nicklaus Outpatient Center in partnership with Miami Children’s Hospital, which is designed to meet the healthcare needs of children and adolescents from birth through age 21.
More than just the charities and valuable dollars that have been raised, Barbara Nicklaus has been a steady point person to assist other wives of PGA Tour players. Providing critical advice to keep the husband’s performance on the golf course and at home on the same track. Knowing full well the isolation that can happen as a man attempts to build a golf career in concert with a growing family is no easy balancing act. The Nicklaus clan consists of sons Jack II, Steve, Gary and Michael and a lone daughter Nan. The family has since added 22 grandchildren.
“Wow! What a truly humbling honor!” she said when informed of the award. “The USGA has been a part of our lives since Jack and I were teenagers, and we have always respected and appreciated their contributions and impact on the great game of golf. To receive this honor from them, one that bears the name of a man who had such a deep impact on our family, is one of the most meaningful recognitions I have been blessed to receive.

“Golf has not only given us an incredible life, it has provided us a vehicle and a means to make a difference in the lives of young boys and girls, and the families who love them. I don’t think our life’s work could ever compare to or repay what the game has given to us. I thank the USGA, the caretakers of this wonderful game, for this extremely kind gesture and honor.”