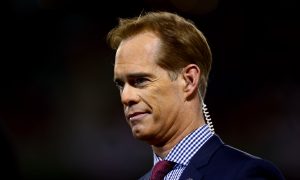 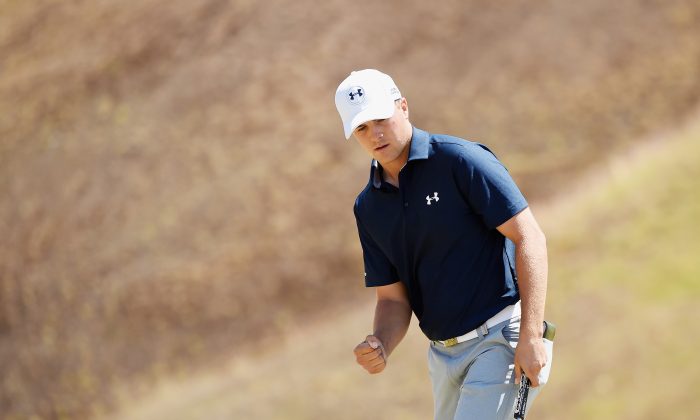 Jordan Spieth celebrates after a birdie putt on the ninth green during the second round of the 115th U.S. Open Championship at Chambers Bay on June 19, 2015 in University Place, Washington. (Harry How/Getty Images)
Golf

University Place, WA—When 21-year-old Jordan Spieth won this year’s Masters event there was much celebration given how he failed when under the bright lights the year prior when battling eventual winner Bubba Watson down the stretch of the ’14 event. His dominance at Augusta this year was of epic proportions, tying the four-round total of 270 which Tiger Woods had set when winning his first green jacket in ’97.

Given his young age it would not have been unexpected had Spieth suffered a letdown and needed time to get back into top form. After two rounds at the 115th U.S. Open, being played at the firm and fast Chambers Bay, Spieth is tied for the lead at -5 (135) with Patrick Reed. To put things in perspective, since Augusta there have been six rounds played in the majors—Spieth is under par in each of them thus far.

Jordan wasted little time in coming out of the blocks fast during Friday’s second round. He birdied four of the first eight holes before a poor drive, and even poorer second shot out of a fairway bunker at the 18th—his 9th hole of the day—eventually caused him to make a double-bogey. To demonstrate his resiliency, Spieth bounced back on the very next hole—the 1st—his 10th hole of the day, with a fine birdie.

Spieth possesses a deep passion for the game, highlighted by his total maturity at such a young age at golf’s highest level—something the game has not seen since the early days of Tiger Woods. While he doesn’t possess the prodigious length of Dustin Johnson, who finished weakly with two consecutive bogies and is now one stroke behind the co-leaders, Spieth has airtight confidence of his considerable abilities.

Jordan’s uncanny wherewithal to play just about any short shot always keeps him alive on any hole. Case in point during the 2nd round was his play at the 16th—the 7th hole of his round. Having pulled his tee shot into the high fescue, his approach jumped out of the rough and bounded over the green, leaving a very long and challenging bunker shot. Spieth blasted the ball to about eight feet and calmly drained the putt. For him a routine par—for others bogey or worse would likely have happened.

Spieth is the only person capable in winning golf’s Grand Slam this year and while the probability of that happening is indeed very remote, his play through two rounds at Chambers Bay shows the Texan is more than prepared to be in the mix through the very end of this event.

Much has been said—rightly so—about golf’s new generation of up and coming players. Plenty of pre-championship chatter was focused on the two aging lions—Tiger Woods and Phil Mickelson. The former continued his sloppy and ineffective play and failed to make the cut. Lefty did make the cut but his second round 74 was ample proof that Phil is no longer the consistent player he once was.

When the 3rd round commences Saturday, at the tail end of the field in the final twosome of players will be Jordan Spieth and co-leader Reed. Both are extremely talented—both want to stamp themselves as the players who will push Rory McIlroy, the current world number-one, to the max and possibly even supplant him.

All of the sidebar stories have been pushed aside and for the final 36 holes the best players are now circling and looking to see which of them has the nerve and determination to hoist the U.S. Open trophy this Sunday. Here comes Mr. Jordan—the field had best be ready to fire back or get run over.