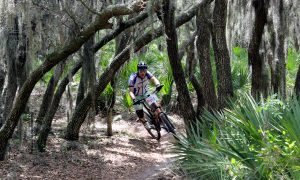 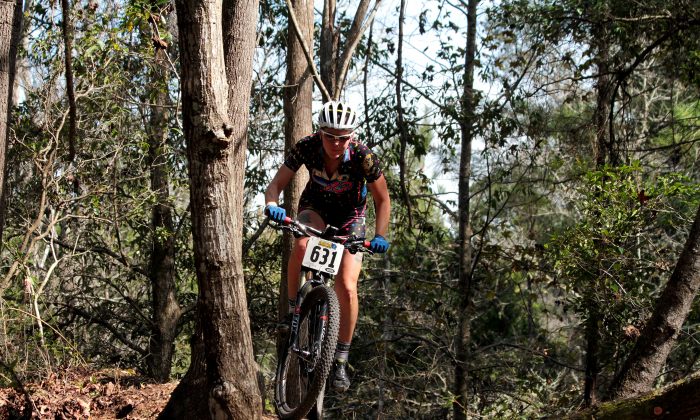 2015 Twelve Hours of Santos: Riding to Help an Injured Racer

Not all the races are twelve hours long; GoneRiding hosts normal thirty-to-forty mile races, as well as off-road footraces and off-road triathlons, but the toughest events, and biggest parties, are the endurance events.

The 2015 fit the form: hundreds of riders from around the region showed up to camp, eat, swap stories, and ride before, during and after the race. There was a slightly more serious note about this year’s gathering, however.

“First time I rode a ‘mountain bike’ was probably in 1983,” Berger explained shortly after the start of the race. [Back in the day a “mountain bike” was any bike the rider took off-road; most had wider tires and handlebars, but otherwise were just regular bicycles] “The sport was really new then—it didn’t impress me too much at the time. I kind of just hung the bike on my wall; it sat there for about six years.”

Motocross did impress him. “That was kind of the first sport I really got into, my first passion. I decided to give that up when my son was about to be born; I dusted off the mountain bike and that was in ’89. The next weekend I started racing and I’ve been in love with it ever since.”

Meanwhile he and his wife formed GoneRiding as an organization to promote mountain bike racing in Florida.

“My wife Terri and I founded it in 1993. We’re based here in Florida, in Ocala but we do races as far north as Tennessee, North Carolina; we’ve actually been in Virginia before, Alabama, a lot in Georgia—all over the southeast.”

As mountain biking grew in popularity, GoneRiding added events, spreading into different disciplines, but kept the focus on outdoor competition.

“We probably do about half a dozen endurance events a year,’ Berger said, “Our most common event is a typical cross country, a shorter one-to-two hour event. We do traithlons as well. Last year we got into some pure off-road running. Everything we do is off-road.”

Through it all, Berger kept up his own interest in both bicycles and motorcycles, hitting the trails whenever he could. One day in Janurary, a trail hit back.

“I was on my motocross bike practicing, not riding hard at all and just had a freak accident— my throttle stuck at a really bad time and threw me off the track into a tree at about 45 mph.” The impact shattered Berger’s pelvis and broke his hip.

It took several surgeries and a handful of hardware, but just over a month after his crash Berger was able to attend the Santos 12 Hours, albeit riding a wheelchair instead of a mountain bike. Despite whatever soreness he felt at the moment, Berger was fully focused forward. “The prognosis is good—I’ve got a lot of screws and bolts and stuff in me, but I’m told that I can probably start walking about a month from now and hopefully be riding by the end of the year.

“My main motivation right now is to walk—I’m really, really going to be happy when I start riding my bicycle.”

Mountain biking can be an intensely competitive sport, but its principle allure is camaraderie—riders feel like part of a clan, brought together by their love of trekking through the woods.

For many a race like the Santos 12 Hours is not a chance to compete, but a chance to see friends from far way who make an annual pilgrimage to Ocala just for the friendship.

The racing is serious, no doubt. Riders with world-class credentials show up to test themselves against the tough terrain for twelve hours. These people are amazing athletes using their full potentials to ride more miles than the competition, or to beat their own best marks from years before.

Saturday night after the race, and then Sunday, is when one can see the knots of people around campfires, or groups of friends heading down the trail just for the pleasure of shared experience, with the “race” portion of the weekend being out of the way.

“Mountain biking really offers such a tight family—the amount of support and prayers and good will that we’ve got really became evident after this accident,” explained an obviously emotional Berger. “It really got in my face. I’ve been able to absorb a lot of that and I am just so thankful that we’re part of it and we are so fortunate to be at a central part in the sport where we see so much of the people and the activity. I can’t be happier, honestly.”

One—just one—instance of this kind of support came from Jacksonville, Florida’s CityCycle, a bike shop which offered to pay half the entry fee for teams CityCycle customers signing up for the race, and half for another twenty teams. CityCycle informed riders about Mr. Berger’s situation, and by making it easier for riders to sign up, boosted the entry fees Berger and his wife would collect—just a little bit extra to help pay the bills.

As CityCycle said on their site, “If you have done a race in Florida, the Bergers have put that race on! We are so grateful for the contributions that Dave and Terri have made to mountain biking in Florida over the past 20 years. Through thick and thin, they have been an essential part of the community.”

During the race, an announcer got on the PA to deliver to the assembled riders the very welcome news that Berger had made it to the event. The news was greeted by enthusiastic cheers and applause.

Dave Berger plans to be back on his bike by the end of the year—and happy as he is now wrapped in the warmth of fellowship, he will doubtless be happier still when he is out on trails with his riding buddies. Meanwhile, he and his wife will continue their normal schedule of GoneRiding events, aided by friends and staff and the community in general.

Check out GoneRiding’s upcoming events at http://goneriding.com/index.php/events/2015-events or support Dave by picking up a jersey, shirt, or water bottle at the GoneRiding store.

Better still—get a bike and go riding. There is a family of friends out there waiting for you.

More photos from the 2015 Twelve Hours of Santos will eventually be available at CyclopsPhotos.com.