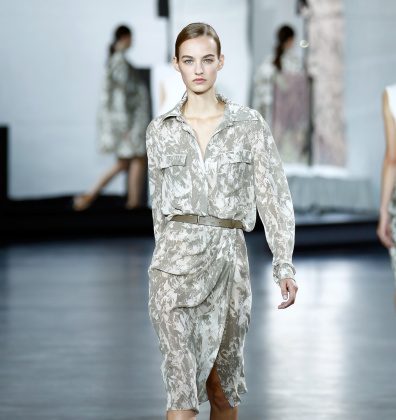 September in New York City signals the unofficial end of the summer and a return of the world’s top designers, models, celebrities, and media for a week filled with a glimpse of what next spring and summer hold and, of course, amazing afterparties.

Many designers integrated technology into their shows. Diesel Black Gold teamed up with Samsung to design a selection of Gear S smartwatches that debuted on the catwalks. Marc Jacobs teamed up with Beats by Dre to provide individual headphones to all attendees to wear during the runway show. Ralph Lauren took the cake with his launch of Polo for Women in Central Park. The designer used 4D hologram technology to project Polo-clad models on a 60-foot-tall screen of water over the lake.

While collections are typically presented with a story, opening ceremony took that to a literal level. They presented their collection at the Metropolitan Opera House via a play entitled “100% Lost Cotton,” written by Spike Jonze and Jonah Hill. The play featured actors Elle Fanning and Rashida Jones as well as model Karlie Kloss.

Now that New York has handed the baton to London, we can finally sit down to discuss the trends for Spring 2015.

Military Green
Spring greens usually conjure up images of soft, sugary pastels. However, the choice of green for next summer is a decidedly darker military hue, usually reserved for the fall season. At Marc Jacobs, we were expecting a bright and happy collection as we sat waiting for the show to start in a Pepto-Bismol pink room at the Park Avenue Armory. However, our mood quickly changed to a more subdued melancholy feel as makeup-free models, including Kendall Jenner and Candice Swanepoel strutted down the runway in deep green army fatigue hues.

Gingham Style
“I’ve a feeling that we’re not in Kansas anymore,” said Dorothy in the “Wizard of Oz.” We knew it because there was a saucy gingham in town. The runways were ablaze with checkers in more daring silhouettes than we typically associate with the pattern, including Altuzarra’s trademark provocatively high-slit pencil skirts shown in pink, baby blue, and black checkers.

Dare-to-Bare Formal Wear
Keep investing in those Pilates classes as the midriff styles that have been prevalent in past seasons move into the formal arena with abdomen-exposing evening gowns. Designer Christian Siriano went so far as to include a wedding gown for those daring enough to walk down the isle with an exposed midriff.

Magnificent Mesh
The mesh trend seen in sportswear last spring continues in an elevated way to include evening wear. Designers are incorporating technology in their fabrics, updating synthetic fabrics like neoprene, organza, and nylon with mesh. These transparent futuristic fabrics call for a just-the-right-amount-of-sexy see-thru while keeping it classy.

Hello Sunshine
With yellow dominating the runways for Spring, the designers seem to take a page out of Pharrell’s playbook as the clothes and even some of the models walking down the runway were just happy. Desigual had a big sunflower for their backdrop as Adriana Lima danced down the runway blowing kisses to the crowd and Nanette Lapore’s show ended with the models dancing in a conga line. This happy hue was seen everywhere from gowns at Carolina Herrera to trench coats at Ralph Lauren.

Pialy Aditya and Sonaly Aditya are fashion-tech entrepreneurs in the New York startup scene. Reach them on Twitter @pialyaditya and @sonalyaditya