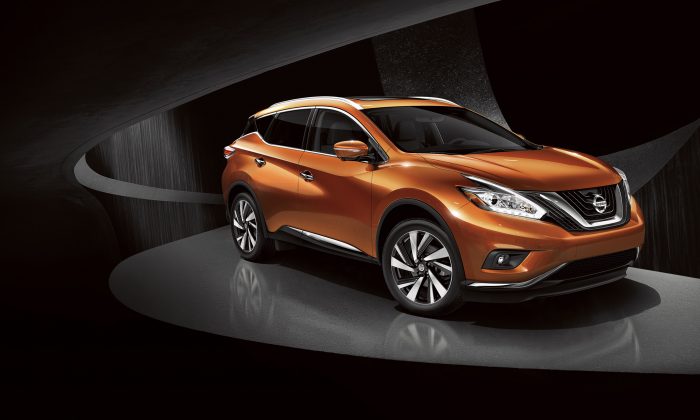 If cars can be considered works of art, then the Murano is a Picasso. The Murano is decidedly modern in its design, and while its lines are not the cubist disjointed lines of a Picasso painting, they do work together to suggest continual fluid movement.

The Murano was a head-turner when it was first launched 12 years ago. Today, line it up next to its competitors in the mid-size SUV/Crossover category (Jeep Grand Cherokee, Ford Edge, Toyota Highlander) and the more athletic, back-to-the-future styled Murano definitely stands out.

Inside stands out as well, with an interior design that feels open and modern, much like a conversation lounge. The expanded center console actually plays a key part in this design. It creates extra space between the two front seats, allowing passengers in the back to have a better view of what’s going on up front. Front armrests are also built directly onto the console, again, contributing to the modern feel of the vehicle. Borrowing the “NASA-inspired zero gravity seats” from the Altima, all of the outboard passengers can ride in comfort. Also adding to the enjoyment of the refined interior is a panoramic moonroof.

Murano is definitely on the cutting edge of design, both inside and out.

The Murano comes in four trim levels. The base model S starts at $29,560 and starts out with Bluetooth and streaming audio, 18-inch wheels, smart key, and dual-zone climate control. For about $10,000 more, you can move all the way up to the Platinum edition, which includes everything in the other models plus 20-inch wheels, LED headlights, climate controlled front seats, and a heated steering wheel as well as heated rear seats. In-between the S and Platinum, leather seats, USB ports, and Bose audio get thrown in.

All Muranos are powered by a 3.5 L V6 mated to the Xtronic continuously variable transmission (CVT). With that you get 260 hp and 240 lb-ft of torque. At a time when many auto makers are opting for small turbo-charged engines, this makes the Murano seem less modern. However, when you factor in that this vehicle will get 28 mpg on the highway, it becomes obvious that Nissan made fuel economy a priority in this new design. Even the all-wheel drive model gets the same fuel economy as the front-drive version, suggesting that Nissan found ways to lighten up without having to retool for a new powertrain.

Riding on an independent strut suspension up front and a multi-link in the rear, the Murano’s ride is exceptionally well-balanced for a car in this price range. Handling sits in the sweet spot of involving the driver while isolating outside noise, vibration, and harshness.

The 2015 Nissan Murano is definitely on the cutting edge of design, both inside and out. It stands out among its competitors in the mid-size crossover category, and offers a lot of bang for the buck. It’s a modernist’s crossover in every sense of the word.