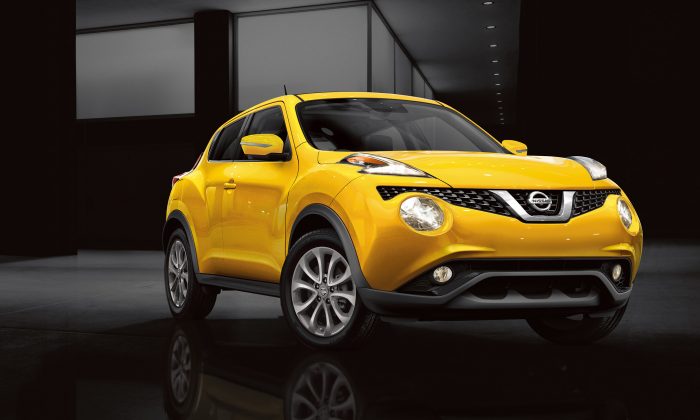 I am an adult—and not a young one, mind you—and I admit that I really like the Nissan Juke. It’s not exactly springing from the closet, but stating the fact I have more than a passing fondness for the Juke has raised an eyebrow or two among my friends. Not to the degree as when I offer that one of my favorite TV series of all time is “Buffy the Vampire Slayer,” but expressing my infatuation with Juke does rattle some friends’ confidence in my judgment.

But here’s the thing, its quirky looks notwithstanding, Juke is just plain fun. It’s fun to have parked in your driveway; it’s fun to be seen zipping around in; and, it’s fun to drive. Does it make me feel a little silly to pull up to the valet stand at Soby’s, my Friday Greenville haunt? Heck, no! “Let them eat cake,” I say.

Gobs of fun from behind the wheel, the vanilla Juke gets its go from a 188 hp 1.6 L inline 4-cylinder turbocharged engine. Until you step up to a Nismo version, the only available transmission is a CVT. No matter the grade, though, every Juke qualifies for all-wheel drive, which tacks roughly $1,850 to the bottom line.

Front-wheel-drive Nismo versions changes cogs with a 6-speed manual transmission. A CVT turns all four wheels in every Nismo with AWD.

As much as I like Juke and love Juke Nismo, I am that much more enthused over the $28,020 Juke Nismo RS, like the one I just had for a week. My test Juke, sans AWD, had the manual tranny. Offering precise shifts, the gearbox and clutch operated together seamlessly. Part of the Nismo RS package is a more robust version of Juke’s turbo four-banger. In FWD guise, it delivers 215 hp and 210 lb-ft of torque. Opting for AWD and the CVT scrubs a few horsepower from the performance. In either regard, it is peppy and accelerates with gusto.

Every Juke comes equipped with lots of standard goodies.

Nismo and Nismo RS benefit from a beefier suspension for more stable cornering. The Nismo RS twin-tube shocks also get a bit of extra tuning. From its rather goofball appearance, you might not expect much in the way of handling from the Juke Nismo RS, but it is surprisingly agile, inspiring loads of confidence when hitting the turns. The Nismo RS gets bigger brakes too.

Inside, Juke may lack some of the passenger and cargo space of other compact crossovers, but my guess is anyone buying a Juke—particularly a Nismo RS—isn’t too worried about cargo capacity. Recaro supplies the leather/suede sport seats with red-leather side bolsters that wrap around you, holding you as though nailed in place. There are plenty of other Nismo accents scattered around the cabin from the red stripe at the top of the leather-wrapped steering wheel to the red-faced tachometer. Adding $470 to the total purchase price were a set of Nismo floor mats and a center armrest.

At the top of the Juke heap, the Nismo RS gets it all, including an upgraded Rockford Fosgate-infused audio system with a subwoofer.

Yep, I like the Nissan Juke and I’m wild about the Juke Nismo RS. And, I just don’t care who knows it!