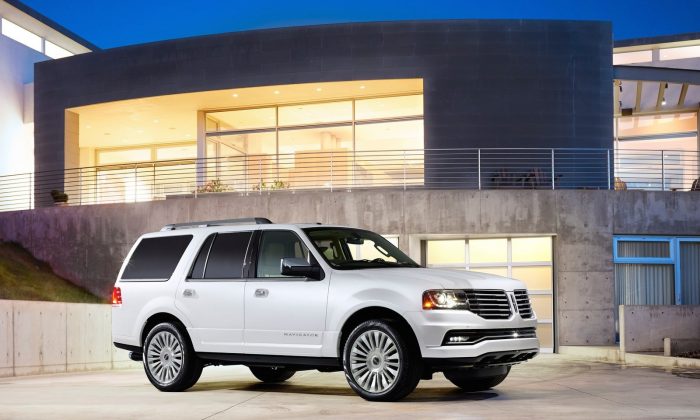 Lincoln will spend great gobs of money to the tune of billions of dollars over the next few years to completely revitalize its lineup with the goal of once again becoming competitive with the luxury nameplates of the world including the world of large body-on-frame sport utility vehicles.

While it will probably be a couple of years before the Navigator gets the full makeover treatment (last done in 2007), which may include major upgrades such as the aluminum body panels now used on the Ford F-150 and a complete styling overhaul, Lincoln has injected some worthwhile styling tweaks and improvements into the 2015 model. Designers reworked the nose with the new Lincoln “split wing” grille and the rear with a more contemporary taillight treatment—upgraded the interior—and added the latest version of the Ford infotainment interface called MyLincoln Touch.

The headline improvement for 2015, however, is the addition of Ford’s award-winning 3.5 L turbocharged V6 engine making 380 hp and 460 lb-ft of torque mated to a 6-speed automatic transmission. Rear-wheel drive continues to be standard and an all-wheel drive system optional. The new engine is an immense improvement over the aging and thirsty 5.4 L V8, endowing the new Navigator with considerably more power while at the same time making it more fuel efficient.

We found the power band to be smooth and energetic although we did not carry a lot of weight and we didn’t tow anything, but we drove congested two-lanes, four-lane limited access highways and city streets. The huge people hauler responded more than adequately to the passing, merging and charging-from-a-stoplight demands that we placed on it.

Although we wish Lincoln would have upgraded the transmission to an 8-speed to go along with the new engine, we found the traditional 6-speed automatic up to the task with smooth shifts as well as quick seamless downshifts when demanded.

While maximum towing capability has been raised to 9,000 pounds, we were more interested in everyday performance, and it’s in this area the Navigator shines—and has caught the newly redone Cadillac Escalade. It has been clocked at 0-to-60 in a rather quick-for-a-three-ton vehicle 6.2 seconds with a quarter mile time of 14.9 seconds at 93 mph. The engine change has gained the Navigator two miles per gallon across the board, now EPA-rated at 16 mpg city, 20 highway and 17 combined.

Since its inception back in the late ’90s, the Navigator has been known for its ability to carry up to eight passengers in comfort with a touch of luxury, and nothing has changed in 2015. Second-row seating is about as good as it gets with comfortable standard-equipment captain’s chairs, stretch-out room, and scads of head room. And unlike a lot of three-row vehicles, the third seat is relatively accommodating for adults. If even more interior space is needed for either cargo or passengers, the stretched-out L version offers a maximum cargo space of 128.2 cu ft. And to access the cargo area simply press a button and watch the third row fold flat.

The interior is handsome with nice-looking materials, and the comfortable cabin is noticeably quiet at highway speeds, a quality that adds to the luxury ambiance. Getting in and out can be made relatively easy if you check off the box for the power running boards, which make entering and exiting an easy two-step experience. This feature comes in a $7,500 package that also includes knock-out 22-inch wheels, premium leather, and Lincoln Drive Control adaptive suspension.

Gauges and controls are clear and intuitive in the restyled interior that is now blessedly rid of most—but not all—hard plastic. The newest version of MyLincolnTouch includes real knobs—not touch buttons embedded in a screen that are hard to use while hurdling down the road at 70 mph—for such functions as radio tuning and volume control. Cabin temperature and the heated and cooled seat controls can also be accessed by the push of a traditional bar. We consider this progress.

Starting at $62,475 including a $995 destination charge, there is considerable standard equipment. Four-wheel drive adds $3,575. While heated and ventilated front seats and a 14-speaker surround-sound audio system are standard, you will have to pay extra for a power moonroof and a rear-entertainment system.

Our all-wheel drive test truck with the aforementioned $7,500 package and a moonroof carried a bottom line of $73,895.