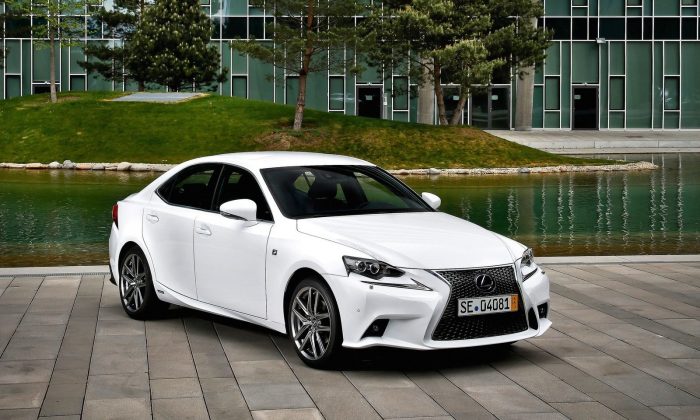 2015 Lexus IS (Courtesy of NetCarShow.com)
Autos

When it comes to blending luxury with a sporty flair, it’s tough to beat the Lexus IS 350. It’s a first-class luxury experience in a sedan that accelerates like a Thoroughbred, and dominates the mountain twisties. Its key German rivals, the BMW 3-Series and Audi A4 may still have a performance edge, but not by much. If the idea is to get somewhere in total comfort, but maybe have a little fun in the process, the IS 350 gets it done.

Lexus had me at the 1989 LS 400. Mocked by the German luxury marques as a glorified Toyota that would never be able to compete with the well-established European luxury brands, the LS 400 gave those naysayers a little ride around the block on the Reality Bus. Sure, the ES 250 that shared dealer floor space with the LS 400 was not much more than a gussied up Camry, but the LS 400 was a luxury sedan to be reckoned with.

As the Lexus brand evolved, a 3-Series fighter was a logical addition to the lineup. As is true with Lexus in general, ride quality and passenger comfort remained its focus. That is still so today.

Shoppers wishing to lop a few grand off the IS 350’s $40,065 base price can drop down a peg to the $35,650 IS 250. The key difference is the IS 250’s smaller V6 and less sophisticated transmission. Both are rear-wheel drive and offer pretty much the same standard content.

Providing the IS 350 with its oomph is a 306 hp 3.5 L V6. A driver-shiftable 8-speed transmission swaps the cogs. Ponying up an extra $2,235 will get you all-wheel drive, but also means trading the 8-speed for a 6-speed automatic. Making that conversion will also cost you a little, but not as much as you might think at the pump. EPA-estimated fuel economy drops from 19 mpg city/28 mpg highway/22 mpg combined to 19 mpg city/26 mpg highway/21 mpg combined.

Hitting 60 mph from a standstill requires around six seconds. This isn’t as quick as, say, the similarly priced BMW 328i that does it in about half a tick of the watch less, but it is quicker than the less-pricey A4. In any case, most of us won’t be disappointed with the thrust when goosing the gas pedal.

Both the adaptive suspension and highly responsive steering enhance cornering and bolster confidence when pushing hard through the bends. You won’t be lulled into thinking you are in a LFA, but it’s a fun driver nonetheless.

Able to swaddle four adults in comfort, the cabin is awash in soft-touch surfaces. All of the systems operate intuitively. Most owners will only need to consult the owner’s manual to check up on service cycles and tire pressure. The seats are well bolstered, yet quite comfortable. There is a surprising amount of rear-seat legroom. The cabin is a terrific place to spend some time.

There is only one well-equipped trim level to which you can add some stand-alone, as well as, packaged options. Every IS 350 comes with automatic dual-zone climate control, 8-way power front seats, keyless entry/start, 8-inch color touchscreen, Bluetooth connectivity, and an eight-speaker audio system with CD player and iPod integration.

If your goal is driving a smaller luxury sedan with some sporty flair, you could stop looking when you reach the IS 350. It’s not the quickest or best handling sedan in its segment, but the differences between it and its core competitors are subtle at best. And in terms of build quality, reliability and the passenger experience, it is top tier.