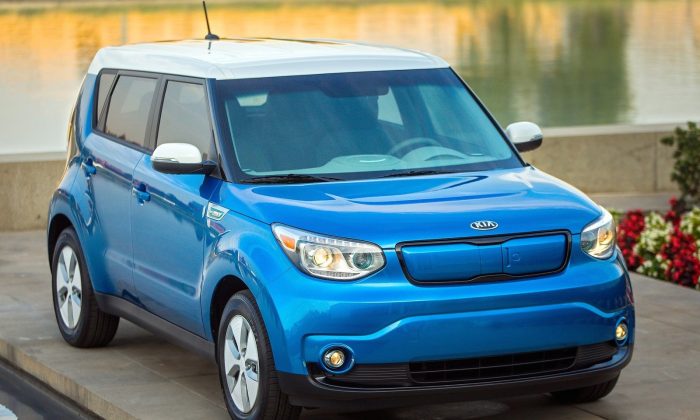 Kia picked the perfect vehicle for its first electric car effort and surely the hamsters are dancing in the streets charged up by a jolt of electricity. The second-generation Kia Soul was introduced for the 2014 model year loaded with style and character and it’s now the company’s second-best seller. So it seems a no-brainer to turn the hip urban crossover into the company’s first all-electric zero-emissions vehicle.

The Soul EV promises a 93-mile range, bested only by the considerably more expensive luxury Tesla Model S. And the Soul’s 360-volt lithium-ion polymer battery pack charges relatively quickly, about five hours when plugged to a 220-volt outlet. We were saddled with just a standard 120-volt charger, which according to Kia will pump up a depleted battery in 24 hours. Two charging sessions took only about 15 hours on both occasions. We charged a second EV with the 120 for about 20 hours to max the battery. If in a rush the Kia can gain an 80 percent charge in about 30 minutes using a fast charging port.

What didn’t impress us was the range that fell far short of the advertised 93 miles. We were left with a 79-mile range after the first charge and a 77-mile range after the second. The second EV proved better, giving us a 91-mile range. But that was basically our only gripe and something that could probably be mitigated with the proper at-home charging station.

We were pleased with the performance of the car from its 109-horsepower electric motor, which produces 210 lb-ft of instantaneous torque. We soundlessly moved through city traffic getting up to stoplight-to-stoplight speed in a brisk fashion. We were astounded at how quiet the Soul EV performed under acceleration with virtually no motor whirring, just the low-level noise of low-resistance tires on pavement. For the benefit of pedestrian safety, the Soul EV is equipped with a Pedestrian Warning System that emits an auditory alert at speeds below 12 mph and whenever the car is in reverse.

We anticipated trouble gaining highway speed from the on-ramp and we worried about difficulty merging into 65 mph traffic. Our fears proved unfounded as we pushed the pedal to the medal and the Soul responded with pleasing performance. We found that the car handled extremely well. It was well balanced and Kia engineers did a nice job in retuning the suspension to handle the 400 lb. of extra weight it gained with its sizable battery, regenerative brakes, and stiffer (heavier) low-resistance tires. What’s more, because of the retuning, the Soul EV’s center of gravity is lower making it hug the pavement even more.

On the outside the Soul EV sports a more aerodynamically clean exterior design with its grille replaced by a charging port, new headlights and bumpers, and flat-faced wheels. And the Soul EV offers three distinctive dual-color schemes.

Inside, the Soul EV features a unique instrument cluster with white interior trim, using a custom version of Kia’s UVO infotainment system. This revised version of UVO does everything from show the electric car’s maximum range on top of a digital map to displaying exactly how much electricity things such as the headlights, windshield wipers, and turn signals are using.

The Soul’s boxy design results in excellent head room for both rows of passengers while providing a good field of vision in all directions. Cargo space has been reduced from 24.2 cu. ft. without the under tray in the standard Soul to 18.8 cu. ft. in the EV to allow for battery storage. Likewise, with the seats folded the standard Soul has a useable 61.3 cu. ft., the EV just 49.5 cu. ft. The enlarged tailgate is defined by black glass that morphs into a gloss black trim that runs around the back and surrounds the large vertical taillights. It’s very fetching.

The Soul EV is currently available in selected markets with limited availability.