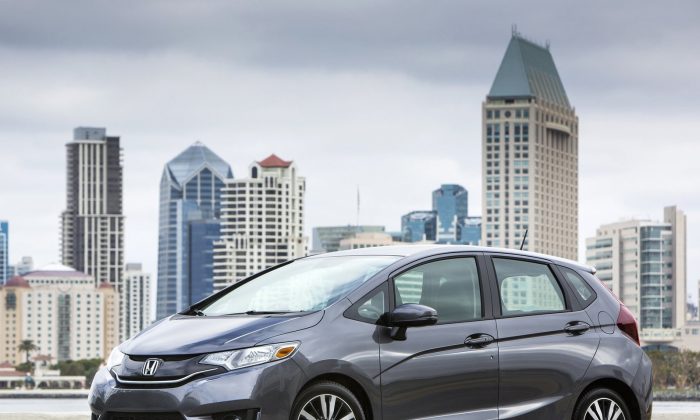 Honda hired a professional packer to demonstrate the interior size of its third-generation 2015 Fit at an event in San Diego introducing the all-new subcompact hatchback. The packing theatrics provided auto writers with a few minutes of entertainment as she worked to shove and push and cajole five full-sized bean bag chairs into the cargo hold behind the rear seats.

Then she moved to a subcompact rival hatchback and—you guessed it—was only able to cram two bags into the back of the car. I jokingly reckoned that I seldom carry bean bags, but, nevertheless, the experiment showed just how incredibly proficient the small Honda is in not only carrying passengers, but in transporting more cargo than you could imagine by looking at the diminutive exterior of the vehicle.

I was on hand for the introduction of the first 2007 Fit in January 2006 and marveled then at its all-around cargo-carrying ability. The subcompact became an instant success; and a few years later with the second-generation introduction I was impressed by the new measure of performance infused into the cargo-proficient car. Decent performance met nearly incredible hauling attributes for the 2009 model year.

Facing a wave of new and very good subcompacts that have reached market since the introduction of the second-generation Fit in the summer of 2008, Honda had to up its game. And I discovered that it has very effectively answered the call with a complete redesign that yields more interior passenger room, sharpens the exterior styling, features a new 1.5-L direct-injection 4-cylinder engine that makes 130 horsepower and 114 pound-feet of torque—13 more horsepower and 8 pound-feet more than the outgoing model—and increases gas mileage to 33 city, 41 highway, and 36 combined—5 mpg better combined than the outgoing model—using a new continuously variable transmission (CVT).

While the car’s drivability has markedly improved, Honda it seemed focused more on the little hatch’s cargo- and passenger-carrying attributes, which were so adroitly displayed by the pro packer. Although the car is 1.6 inches shorter at 160 inches than its predecessor, wheelbase has been increased 1.2 inches yielding more passenger room and full-sized-sedan rear leg room of 39.3 inches, nearly six inches more than the first-generation Fit. This little guy has stretch-out room in back as well as reclining seatbacks making long-distance travel a breeze for four people.

And Honda has retained its trick, multi-configurable, “Magic Seat” allowing the back seat to be folded in several ways yielding a variety of configurable hauling chores.

But for me the new Fit shined the brightest on the road with its traditional panoramic sight lines, excellent passenger space up front, reduced road and tire noise, a high-quality ride for a small car, and enough performance to keep me in command of all driving situations.

Performance is certainly adequate especially considering the mileage numbers, but there are a couple of competitors that are quicker, one being the turbocharged Chevrolet Sonic. The Fit offered decent handling and cornering attributes, but again there are others that are more entertaining, namely the Ford Fiesta, which has the edge in the road-carving department.

The Fit can be outfitted with a revised CVT or with a new six-speed manual transmission. The CVT feels much like a standard automatic and can be configured with steering-wheel-mounted shift paddles allowing the driver to have access to seven “fixed” gear ratios. It’s the same transmission used in the 2014 Civic. I found the manual transmission a breeze to shift, with short precise throws. It adds a measure of driving entertainment to the car.

The Fit, I think, will be a good “fit” for a large variety of the population because of its economical cost to drive, its relatively low purchase price, its generous selection of standard equipment, its passenger-friendly interior, its quiet and composed driving demeanor, and its cargo-carrying attributes.

Honda has done a credible job advancing the nameplate in a growing and competitive segment.