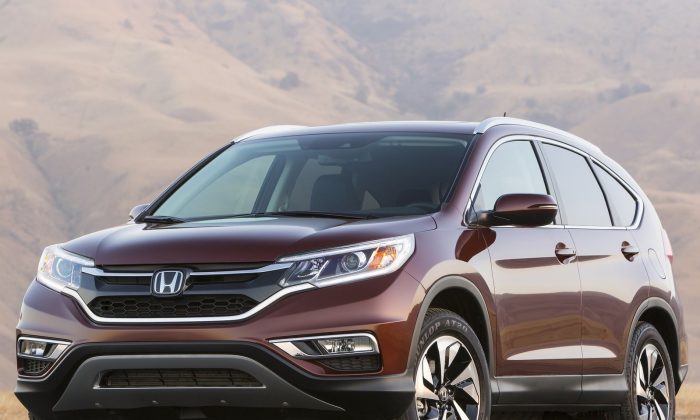 We were astounded when we heard that the 2015 Honda CR-V had won Motor Trend’s prestigious Sport Utility of the Year award because this was anything but an off-year for new crossovers and SUVs. A large group of vehicles, all new for ’15, provided fierce competition. We don’t think it was unreasonable in expressing surprise that a vehicle undergoing a mid-cycle refresh copped the honor.

The CR-V has always been one of our favorite family haulers for its car-like driving dynamics, spacious passenger compartment and cargo hold, refined and fuel-efficient engine, and user-friendly personality. For 2015, Honda has refined and sharpened all the CR-V’s attributes, subtly reworked the exterior styling, and added more content. It was enough to impress the magazine’s panel and impress us as well.

At first glance it appeared that the CR-V had received little more than a minor refreshing of the current model. There’s not much different on the outside except for a more stylistic nose job with different shaped headlights. New wheels and chrome trim on the rear tailgate give the crossover a more up- market look as well.

The real styling updates are on the inside.

The real styling updates are on the inside. For example, apparently one of the major criticisms voiced by CR-V owners was the lack of an air vent for rear-seat passengers. Since air conditioning is standard on all trim levels, that problem has been remedied by adding dual vents behind the center console. Since the whole center console had to be redesigned for the air vents, Honda engineers increased the size of the storage console and improved the armrest.

Other changes include sliding sun visors and availability of a 7-inch touch screen display, 10-way power and heated driver’s seat, and on the top-of-the-line Touring, a power tailgate. We also found the interior to be noticeably more refined than that offered by some of the CR-V’s direct competitors, with a nice soft-touch finish to the dashboard and better seat materials.

The new CR-V offers several of the advanced safety and driver-assist features in the so-named Honda Sensing suite in the new Touring model. They include Collision Mitigation Braking System, Adaptive Cruise Control, Lane Departure Warning, Lane Keeping Assist, and Honda LaneWatch. Until now most of these systems have only been offered in expensive luxury cars. Honda’s stated goal with all these systems, including additional features coming out in the next few years, is to cut fatalities in half by 2020 vs. 2010, and eliminate them entirely by 2030.

There are big changes in the drivetrain although horsepower and torque numbers remain the same—185 hp and 181 lb-ft. The CR-V switches to the Accord’s direct-injected 4-cylinder engine and drops the outdated 5-speed automatic for a continuously variable transmission (CVT).

This has led to a considerable improvement in fuel economy. The 2015 EPA ratings are 27/34 mpg city/highway and 29 mpg combined, an improvement of 4 mpg in the city and 3 on the highway. If you opt for the AWD version economy only drops 1 mpg.

The majority of drivers will have no complaints about the transmission, as it works smoothly and delivers better fuel economy than a regular automatic transmission. We only found it obtrusive on a couple of occasions when we accelerated hard on a freeway and the engine seemed to “race ahead” of the transmission.

We found the CR-V a pleasant car to drive with precise steering, a pleasant ride, and predictable handling. Having said that, the CR-V is not a sports sedan, nor does it have a lot of character. It’s not a car that a driving enthusiast would hanker after. But it’s a car that simply does everything right for the majority of buyers who want a crossover that looks smart, yet is unpretentious and gets the job done.

Despite the relatively long list of improvements, Honda has only increased the price by about $200. In fact it says when you consider items such as LaneWatch that is now standard (except on the LX), and the standard rearview camera, the actual purchase price is lower than that in 2014.

The five-passenger CR-V is offered in four trims—LX, EX, EX-L and Touring—beginning at $24,200 including destination charge. All-wheel drive adds $1,250 to the base model. A loaded Touring (our test car) with all-wheel drive topped out at $33,650. Standard equipment across the board is generous including full power accessories, rearview camera, cruise control, air conditioning, tilt-and-telescoping steering wheel, reclining rear seats, Bluetooth phone and audio connectivity, and a four-speaker audio system.

What’s more it comes with Honda’s great reputation for reliability and quality.