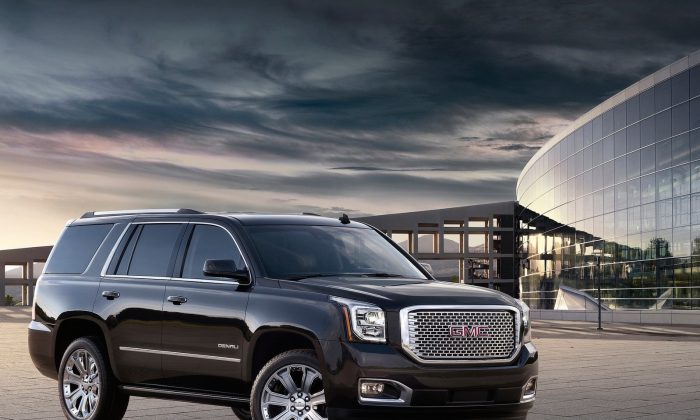 The GMC Yukon is the slightly upscale version of the Chevrolet Tahoe in General Motors’ full-sized sport utility ranks; both provide nearly identical equipment and engine configurations. The big differentiation comes with the decidedly upscale Denali, which turns the Yukon—and its larger stablemate, the Yukon XL—into a luxury land yacht rivaling such nameplates as BMW, Mercedes, and Land Rover.

Over the years the Denali name has become synonymous with big truck and big SUV luxury, successful beyond perhaps General Motors’ wildest dreams. And things only get better for the 2015 GMC Yukon and Yukon Denali, which are recipients of a complete makeover, riding on a new platform shared with the all-new-for-2014 GMC Sierra body-on-frame pickup truck.

With the restyling, the Yukon gets a new grille (a giant menacing-in-the-rearview-mirror version in the Denali), full-width bumpers, more sculpted sides and fenders including a strong character line just below the beltline, and a slightly less raked windshield. The new styling modernizes the big, sport utility while leaving its basic look intact.

The big V8 hurtles the 5,500-pound Yukon Denali down the highway in quiet comfortable surroundings infused with a vast array of modern electronics, and adorned with leather seating and real wood and aluminum accents.

The new Denali offers a very serene ride, an extraordinarily quiet interior, stellar performance combined with decent gas mileage from a 6.2 liter V8 making 420 horsepower and 460 pound-feet of torque, and now with features formerly lacking such as a fold-flat third-row seat, electric power steering, a backup camera with rear cross-traffic alert, a standard center airbag between the driver and passenger, and onboard 4G connectivity.

The 6.2 liter engine, which gained 17 horsepower from the 2014 edition, can finish off a 0-to-60 run in 5.6 seconds and can fly through a quarter mile run in 14.3 seconds, mated to a six-speed automatic transmission, has extraordinary numbers for a vehicle of this size. An eight-speed automatic will be added to the Yukon lineup later in the 2015 model year. What these statistics mean to the average driver is that the Denali can merge and pass with exceptional ease, a very attractive trait for a luxury SUV.

We were pleased with the on-center highway feel of the new electric power steering and the big truck’s ability to hold the line at increased speeds on curving roads loaded with 35 mph cornering signs. Body roll was minimal thanks in part to the standard magnetic ride control, a unique feature that has moved from the Corvette to the company’s more mainstream vehicles over the years.

The interior has been updated with a more sculpted dashboard that includes an eight-inch LCD touchscreen mounted higher in the dash for easier viewing. Interior materials in the Denali are first class, and fit and finish is excellent. The large, central infotainment display with reconfigurable digital instrument panel is intuitive to navigate and its graphics are simple and easily interpreted. The premium Bose 10-speaker surround-sound audio system supplied the quality sound one expects from a luxury vehicle. And, important to us, the readout for satellite radio is excellent.

Front and second-row captain’s chair seating in the Denali proved comfortable and spacious. Reaching an optimum driving position proved easy with the combination of power adjustable pedals, power tilt and telescoping steering wheel, and eight-way adjustable driver’s seat. When all seats are folded and tumbled flat, cargo carrying capacity is a reasonable 94.7 cubic feet. With all three rows in place, there is 15.3 cubic feet available for storage.

Safety is well covered in all Yukon trim levels and includes antilock disc brakes, traction and stability control, all the requisite airbags (including one located between the front bucket seats to aid in side-impact crashes), front and rear parking sensors, a rearview camera, and OnStar automatic crash notification and turn-by-turn navigation.

Despite its high level of standard features, one of the best of several options on our Denali test vehicle was power retractable running boards ($1,745). We of old and aching knees welcomed the extremely helpful step-in aides each time they powered out as we opened the door. Also extremely helpful in the driving experience was the optional adaptive cruise control ($1,695).

The two-wheel drive Denali carried a base price of $62,680 and a bottom line, with several options included, of $72,215. For people looking for even more space, the Yukon XL starts at $50,030 in standard trim and $66,370 in Denali trim. Our Denali XL with AWD and a touring package along with the running boards and adaptive cruise control came to $77,965.