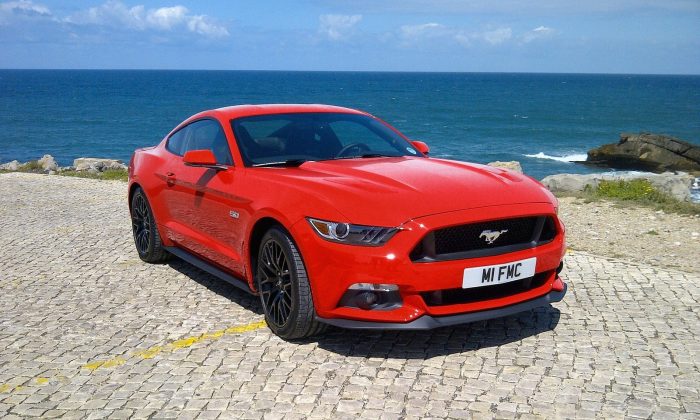 There’s been much hype during the past year over the all-new version of the iconic pony car, and the flood of superlatives over the 2015 Ford Mustang are mostly true. This sixth-generation Mustang, now in its 50th year of production is indeed the best Mustang ever.

The overall driving dynamics are improved, and specifically its ability to charge through a winding mountain road at ungodly speeds has never been better. Ford designers have given us a modern, sophisticated style that is unmistakably Mustang.
Ford has successfully introduced a performance-oriented version of its EcoBoost 4-cylinder architecture into the Mustang, elevating the lineup’s gas mileage numbers. The Mustang sports a quieter interior with upgraded materials while adding some neat features such as puddle lights that project an image of the Mustang galloping horse when the doors are opened at night.

The roofline is pure Mustang fastback

We think the new design strikes the right balance between the iconic Mustang look and a modern sports car. The upper grille is flanked by tri-bar running lamps and slim wraparound headlamps, and the lower opening by matching fog lamps. The roofline is pure Mustang fastback with twin character creases connecting the wheel arches. The three-element taillamps with sequential turn signals are Mustang staples, and the tapering roof over muscular haunches gives it a seriously planted stance.

The headline news however, comes under the appealing new skin. For instance, the traditional solid axle rear suspension has finally been scrapped for an independent rear suspension that enhances the Mustang’s on-road demeanor, particularly in the areas of ride comfort and handling. And the Mustang is the first car to offer 4-cylinder, 6-cylinder and 8-cylinder engines, each producing at least 300 hp.

Ford has retained the outgoing V6 engine and it’s a good one making 300 hp and 280 lb-ft of torque to give the more expensive 2015 Mustang an affordable option for young people on a budget. Base price is $24,425 including destination charges.

The new-to-the-lineup 2.3 L EcoBoost 4-cylinder gives the Mustang a new dimension in performance and gas mileage, endowing the car with a modern engine for the world market. It boasts 310 hp and 320 lb-ft of torque. Important to a lot of Mustang owners, it has go-fast credentials measured from 0-to-60 in 5.2 seconds and a quarter mile time of 13.9 seconds at 98 mph. Mileage is EPA-rated at 21 city, 32 highway on premium gas. Base price is $25,995 including destination charges.

True Mustang brawn with its deep, guttural yet strangely refined roar has been retained in the GT with the traditional 5.0 L V8 boasting 435 hp and 400 lb-ft of torque. Its push-you-back-in-your-seat performance was smiling inducing. The GT has been measured in 4.5 seconds from 0-60 and 13.0 seconds at 113 mph in the quarter mile. Perhaps as impressive, it can come to a complete stop in just 108 feet from 60 mph. The GT V8 starts at $32,925 with the 6-speed manual transmission.

In fact all three engines can be purchased with either a 6-speed manual or a 6-speed automatic. If you desire the automatic add $1,200 to the sticker price.

Our test cars (the GT and 2.3 L) each came with a 6-speed manual, which we found easy to shift, but prone to lurching forward on our initial attempts. We soon learned to smooth things out, and discovered starting out in second gear in the torque-laden V8 worked just fine. Our runs through all the gears proved to be a great drive – true fun!

Inside, the Mustang pays homage to Mustangs of the past with its dual-cowl-style dashboard. There’s a more spacious feel thanks to the less-imposing dashboard and slimmer center console. The steering wheel’s contoured grips and reduced size is more driver oriented than before, and a soft elbow pad on the console adds comfort to the cockpit. We found the gauges more legible than in the outgoing car. And we rate visibility better than either the Chevrolet Camaro or the Dodge Challenger.

We were somewhat astounded and pleasantly surprised at all the modern technology available on the new Mustang. For instance, our well-equipped GT Premium and EcoBoost test cars came with blindspot monitoring with cross-traffic alert, adaptive cruise control with collision mitigation, and voice-activated navigation. For those people who desire a manual transmission but cringe at the thought of being stuck at a stoplight on a steep incline, hill-start assist comes as standard equipment.