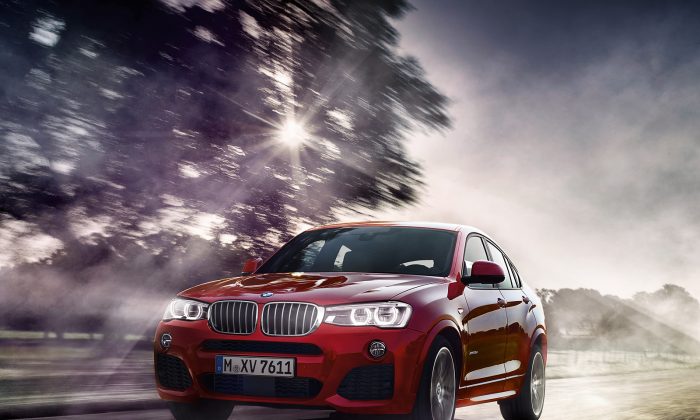 Acura perhaps was the architect of the modern version of this amalgamation of what the Germans called a four-door “coupe” crossover with its short-lived ZDX, built between 2010 and 2013 before it was scrapped for lack of sales. Honda also created a version for its mainstream brand called the Crosstour. It’s been on sale since 2012, but in very small numbers.

Likewise BMW has developed two SUV-like vehicles endowed with sporty styling and a more aggressive driving demeanor that truly puts a new meaning into the sport portion of sport utility vehicle. Unfortunately, the utility part of the equation is lost in translation. The rather impractical luxury mid-sized X6 SUV, with seating for four and meager cargo capacity, came on the scene in 2010, the same year as the Acura ZDX. Not only does it live on (in performance M trim as well), it now has a sibling in the smaller X4 Sports Activity Coupe, which reaches the marketplace this year as a 2015 model.

Steering is accurate and cornering was a blast

The one good thing we can say about the X4, a cousin to the more mainstream traditional X3 crossover, is that it’s fun to drive in the true sense of the word. In fact, we found it one of the most enjoyable vehicles we’ve driven in the past year or so, responsive and relatively tossable from a high-seating position. Steering is accurate and cornering was a blast on the winding roads we usually use as our personal test track. One caveat, there is more body lean in the taller X4 than in a standard 3-series vehicle.

BMW explains the vehicle’s surprising winding-road prowess by explaining that its Dynamic Stability Control system directs power to the outside rear wheel when cornering which improves traction, turn-in and directional stability. Working in tandem with the standard variable sport steering, these systems allow the X4 to deliver driving dynamics that one would expect in a BMW.

We found the 6-cylinder performance satisfying, measured from 0-to-60 in a scant 5.2 seconds and in 13.9 seconds at 98.8 mph in the quarter mile. For optimum performance a Driving Experience Control switch on the center console can be set to Sport. Conversely, if fuel economy is of upper most importance, the switch can be turned to ECO PRO. It includes a coasting function for maximum fuel efficiency.

But here’s the thing, the less expensive and slightly more fuel efficient 4-cylinder provides nearly as much performance with an off-the-line time of 6.0 seconds. The 4-cylinder is rated at 20 mpg city, 28 highway and 23 combined. While the 6-cylinder is nearly as thrifty, rated at 19/27/22 the price difference between base models is $3,300.

Standard equipment is generous and includes 18-inch alloy wheels, sunroof, power tailgate, dual-zone climate control, tilt-and-telescoping steering wheel, eight-way power front seats, Bluetooth phone and audio connectivity, BMW’s iDrive electronics interface with 6.5-inch display and nine-speaker sound system with CD player and HD radio. For some reason to get SiriusXM radio you will have to shell out $2,200 for the Premium Package, which bundles about a dozen features including keyless entry and ignition. And if you want a useful feature like blind spot monitoring you will have to opt for the $1,900 Driver Assistance Plus package. Crazy!

Prices start at $45,650 for the xDrive28i including $950 destination charge. The xDrive35i starts at $48,950. Unfortunately, a few thousand dollars in options will have to be checked off to get the equipment most people expect from a mid-40-grand vehicle. Our xDrive35i with options carried a bottom line of $58,925.