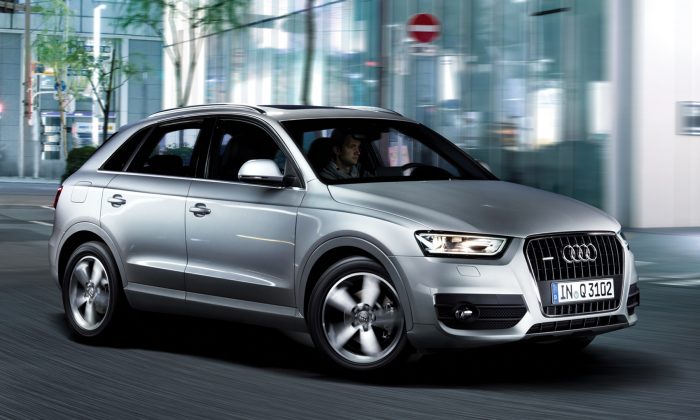 Audi Q3 2.0T Premium Plus quattro Tiptronic is a mouthful of name for a compact crossover. On some versions, Audi actually manages to include much, but not all, of this information on the rear liftgate. Breaking down this nomenclature tells us that it’s Audi’s all-new entry-level crossover.

This example is the lesser grade—there is also a higher-end Prestige trim—with all-wheel drive (quattro). Including “2.0T” and “Tiptronic” seems a bit superfluous because every Q3 comes with the 2 L turbocharged engine and the Tiptronic driver-shiftable automatic transmission. Bottom line: The Q3 is the new little brother to the wonderful Q5.

There is a good deal of luxury going on here.

Beginning at $36,400, the top-of-the-line Prestige grade includes some standard goodies that are either unavailable or optional on the Premium Plus, such as a power rear liftgate and a Bose-infused 12-speaker surround-sound audio system.

My test Q3 also had $3,650 in Premium Plus extras including hardier 19-inch off-road wheels, and navigation with 7-inch display and Audi’s computer mouse-like systems control.

You can think of the Q3 as a Q5 Mini-Me of sorts. In terms of size, the Q5 is roughly 10 inches longer, 2 inches wider, 2 inches taller, and resides on an 8-inch-longer wheelbase than the Q3. At nearly 4,100 pounds, the Q5 hauls around about 500 more pounds than Q3. Styling, however, is quite similar.

As is usually the case with compact crossovers, the front-seat occupants have more elbow room than those in the backseat. Audi’s A4 sedan has about four additional inches of rear-seat legroom over the Q3. As for cargo space, the Q3 has about half as much cargo-carrying capacity behind the second-row seat as the Chevrolet Equinox. But, let’s face it, most owners didn’t buy the Q3 for its cargo-hauling deftness.

Sporting the same turbocharged 2 L turbocharged 4-cylinder engine found in some Q5s, the Q3’s version generates 20 fewer ponies at 200 hp. Where the Q5 benefits from an 8-speed, driver-shiftable automatic tranny, the Q3 uses a 6-speed to switch the cogs. The Q3’s $32,500 base price reflects the cost of the front-wheel-drive version.

With just two wheels to power, the Q3 delivers an EPA-estimated 20 mpg in the city and 29 mpg on the highway for combined mileage of 23 mpg. Opting for the $2,100 quattro AWD system doesn’t affect the combined or city numbers, but does drop highway mpg to 28.

Q3 isn’t the quickest member of its segment, but goosing the accelerator is far from disappointing. It will step out when encouraged. Some enthusiasts might grumble that the responsive steering is a tad light, but it answers the tiller with precision. The ride is controlled, but sufficiently civil to rate Audi’s “luxury” designation. Handling is better than average for a crossover.

Arguably Audi produces the best interiors in the segments in which it competes. Handsomely styled and carefully crafted, they boast top-notch materials from stem to stern. Supportive and comfortable, the seats provide a healthy dollop of side bolstering. German vehicles tend to be finicky with regard to system controls. A certain amount of time must be spent with the owner’s manual to divine the quirks of at least one or two systems. There is a bit of this with the Q3, but most everything is easy to locate, operating intuitively.

A joy to drive, the Q3 delivers solid performance in a nicely styled wrapper. Those insisting on precision engineering and careful craftsmanship in their small crossover, won’t be put off by the Q3’s cozy confines. There is a good deal of luxury going on here with more than a pinch of sportiness added for good measure.