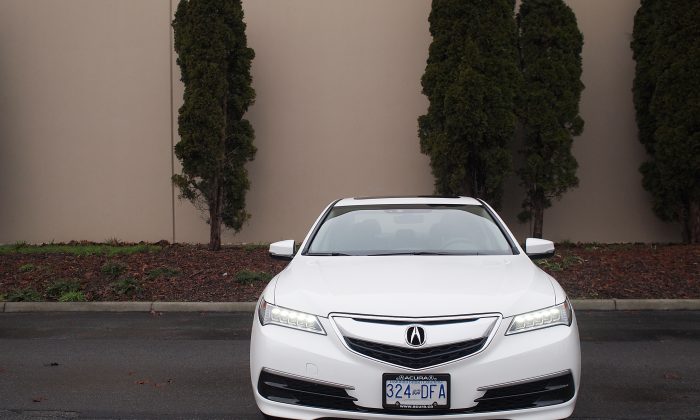 I’m not going to lie. When Acura announced that it was discontinuing the sporty TSX sedan (and its bigger and more elegant brother, the TL), I was saddened. A good friend of mine owns one and I always thought it was a good-looking, well-performing vehicle for its segment that had some character to it. Meanwhile, I knew next to nothing about the TLX. Could it possibly do the job of two cars that catered to different audiences? I spent a week behind the wheel to find out.

Let’s start with the exterior. The car looks more compact than the TL, but it’s actually only 98 millimetres shorter. One of the reasons for this is they shortened the front overhang by 31 mm and the rear 67 mm, making it stubbier and less boat-like in appearance.

People who see the car for the first time often comment about the unique headlight design, which Acura calls the Jewel Eye. Rather than using conventional halogen or xenon technology, the TLX headlamp housing holds a series of LED bulbs that provide intensely bright lighting over a wide radius, and as a bonus look really funky during the daytime.

Inside, it’s surprising that the TLX retains the same passenger room as the TL, despite not being as lengthy. The black-leather-covered seating surfaces (heated and ventilated for the front) are classy and comfortable, and there are little details that remind you that you are indeed sitting in a luxury car, like a soft-touch dash covering, frameless rearview mirror, and aluminium/wood accenting throughout the cabin.

There’s also a lot of tech surrounding the driver.

There’s also a lot of tech surrounding the driver, as well. Honda-affiliated cars continue to employ the two-screen format, using a 7-inch On Demand Multi-Use Display (ODMD) touch screen in the centre console to handle user inputs for climate, hands-free settings, etc., and a Multi-Information Display up top for the available turn-by-turn GPS system. I still find it a little confusing and distracting having to keep tabs on the pair of monitors, trying to remember which does what, but it could come down to a matter of personal preference.

When it comes to powertrain choices, there are more than one, as in two new ones: the 2.4-litre i-VTEC in-line 4-cylinder with 206 horsepower that I had, and an optional 3.5-litre i-VTEC V6 with 290 hp. Don’t let the lesser displacement fool you, as many know Honda can do wonders with a small engine. Not fast, mind you, but balanced. It’s mated to an 8-speed dual-clutch transmission that has fancy automatic rev-matched downshifts and quick, snappy gear changes.

Pair that with Acura’s Precision All-Wheel Steer (P-AWS), capable of controlling the toe angle of the rear wheels independently of each other, and now you’ve got the sport equation part of the package. You can really feel it working when you turn into a corner and there’s this weird sensation of the back end quickly rotating around with you. In addition to P-AWS there’s a Super-Handling All-Wheel Drive system available for the V6 models that we won’t get into here.

So does the TLX properly shoulder the responsibility left behind by its ancestors, the TSX and TL? I’m not sure if I can answer that, but I will say this: With the many ways you can configure the vehicle, from power output to handling characteristics, it can be a lot of different things to different people.

Benjamin Yong is a freelance writer from Vancouver, B.C., and belongs to the Automobile Journalists Association of Canada (AJAC). Follow him on Twitter at twitter.com/b_yong