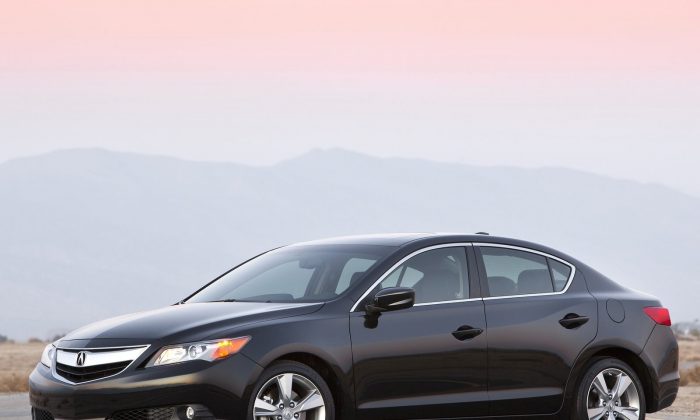 There were a number of good things to write about with the Acura ILX entry level luxury sedan after it arrived on scene as a 2013 model, but performance and driving excitement were lacking—at least in the hybrid edition we were evaluating. Our conclusion at the time, the ILX didn’t make our recommended list.

A couple of years have gone by and the hybrid has been mercifully dropped from the lineup and the standard 2.0-liter 4-cylinder making 150 horsepower remains the mainstream engine, a yawner especially against the European and Japanese competition.

What we missed the first time around was the 2.4-liter performance-oriented model. We didn’t miss it this time and we learned the 2015 version with the 2.4 puts a whole new spin on the ILX. The ILX 2.4 is no super car by any stretch of the imagination, but it offers a pleasing blend of handling and high revving 4-cylinder performance from 201 horsepower and 170 pound-feet of torque that brings grins each time behind the wheel.

Unfortunately for many in this age of automated driving—in which driving a manual transmission is no longer in the driver’s education curriculum—the news is not good. The ILX 2.4 comes only with a six-speed manual. While that’s been a criticism, we like it that way. The 2.4 would not be the same tossable bundle of sedan enthusiasm with an automatic. Overall this ILX is a solid entry level luxury sedan.

The published performance numbers don’t really paint the true picture of entertaining driving that can be derived from the ILX. From a leading automotive magazine: 0-to-60 in 6.9 seconds, and a quarter mile in 15.4 seconds at 91 mph. Please don’t ho-hum us here because you have to be behind the wheel to be rewarded, twisting the compact sedan through the curves, upshifting and downshifting, and raising the rpm up toward red line.

Adding to the enjoyment is a sporting exhaust note and the precision action of the transmission, which is one of the easiest and most enjoyable to use in any car. Fuel economy is good as well, EPA-rated at 22 mpg city, 31 highway, and 25 overall.

Although loosely based on the Honda Civic, you would never know it from its exterior design. In designing the ILX, engineers lengthened the car’s nose and set the windshield farther back. Its best angles show off a rising character line that flows from front to rear up over the rear wheel into the haunches. The design’s weak point is the Acura family big-blade grille. But like it or abhor it, if you buy an Acura you will buy the current grille treatment. It does seem to wear better on the ILX than other models.

The car’s strong suit is the interior, which lives up to the luxury billing. It is quiet, although we wished for a bit less road noise at highway speeds. We were pleased with the room available for rear-seat passengers. Beyond that, we found both the front and rear seats comfortable and the interior materials first class.

Acura has wisely chosen to provide very readable analog gauges. The center stack, which includes climate and audio controls, comes from the larger last-generation TL and although there are a myriad of buttons, we found the workings intuitive.

Standard equipment in the ILX includes such items as dual-zone climate control, a backup camera, and Bluetooth connectivity. And the Acura is loaded with the latest infotainment features.

Strangely the ILX 2.4 comes only in Premium trim sans an Acura technology package which means it can’t be outfitted with navigation. Also, such safety features as blindspot monitoring are absent. The 2.4 does get a useable backup camera.

We were not fond of the hybrid, and we are still lukewarm on the standard 2.0 edition with 150 horses and a five-speed automatic. But the 2015 ILX 2.4 opened our eyes to what this sedan can be. And for its 30 grand price of admission it’s a winner in 2.4 trim.