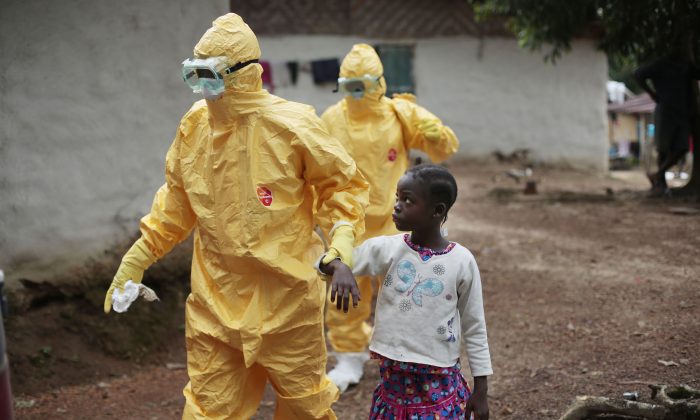 This Sept. 30, 2014 file photo shows Nowa Paye, 9, as she is taken to an ambulance after showing signs of Ebola infection in the village of Freeman Reserve, about 30 miles north of Monrovia, Liberia. (AP Photo/Jerome Delay)
US

If you’re looking for inspiration to start the new year, this isn’t the place for you. But hey, this makes 2015’s outlook just a bit better… right?

Ebola: More 20,000 people have been sickened with Ebola this year in West Africa, said the World Health Organization. More than 7,500 have died this year, and it doesn’t appear that the epidemic is slowing down.

Dr. Thomas R. Frieden, director of the Centers for Disease Control and Prevention, said, “I remain realistic that this is going to be a long, hard fight.” The epidemic spread to the US, prompting a nationwide scare.

Police Problems and Protests: A grand jury decision not to return an indictment against police officer Darren Wilson in the shooting of unarmed teenager Michael Brown sparked violent protests, looting, and riots in Ferguson, Missouri. In August, after the shooting, the protests were peaceful, but it ended up turning into a standoff with militarized police.

The death of Eric Garner and the subsequent refusal to return an indictment against an NYPD officer also prompted protests. On the bright side, the protests have turned into a nationwide discussion on race, police tactics, and income inequality.

Rise of ISIS: The Islamic State, or ISIS, emerged in 2014 as the world’s most powerful terrorist organization after it took over large chunks of Syria and Iraq. The militant group has ruled its territories with an iron fist, with beheadings and even crucifixions used to impose fear into the populace. The group also beheaded several Westerners and distributed the video footage across social media.

A US-led coalition started to bomb ISIS targets in August, but there’s been little progress made overall. Last month, Gen. Martin Dempsey said he’s considering to send US troops to Mosul in the fight ISIS in an attempt to turn the tide.

Russia’s Moves: After alleged Russian-backed rebels took over Ukraine’s Crimea region and likely shot down Malaysia Airlines Flight 17 in July, tensions between the West and the Kremlin have reached levels not seen since the Cold War. Amid the rhetoric, battles are still being waged in eastern Ukraine, with estimates of more than 4,300 deaths this year. The US and Europe imposed sanctions on Russia after the Crimea annexation.

In a potential sign of things to come, this week, Russia labeled NATO as a key threat to its sovereignty. The military doctrine claimed NATO was turning Ukraine into a “frontline of confrontation.”

Plane Disasters: According to some experts, 2014 was one of the safest year’s on record in terms of crashes. However, the planes that did crash or disappeared were commercial airliners–with hundreds of people on board.

A CNN report this week notes that there were only 111 aviation crashes this year–one of the lowest in history, but the death toll spiked to levels not seen in a decade. With the AirAsia crash, about 1,320 people died.

NFL’s Domestic Violence: First, Ravens running back Ray Rice punched his wife in the face and knocked her out–with the NFL trying and failing to avoid a public relations disaster. Commissioner Roger Goodell said he “didn’t get it right” and said there would be worse sanctions for domestic violence abusers.

Then, Vikings running back Adrian Peterson was deactivated for child abuse. Both players will be eligible to play in 2015 should teams decide to pick either up. The NFL was then forced to draft a new personal conduct policy.

Wealth Gap: A new study by Pew has found that the wealth gap in the US in 2014 is the worst in recorded history.

“The wealth gap between America’s high income group and everyone else has reached record high levels since the economic recovery from the Great Recession of 2007-09, with a clear trajectory of increasing wealth for the upper-income families and no wealth growth for the middle- and lower-income families,” the Pew report stated earlier this month.

Robin Williams’ Suicide: The most notable celebrity death of the year came via suicide. Robin Williams was found dead in his home in August after silently dealing with depression.