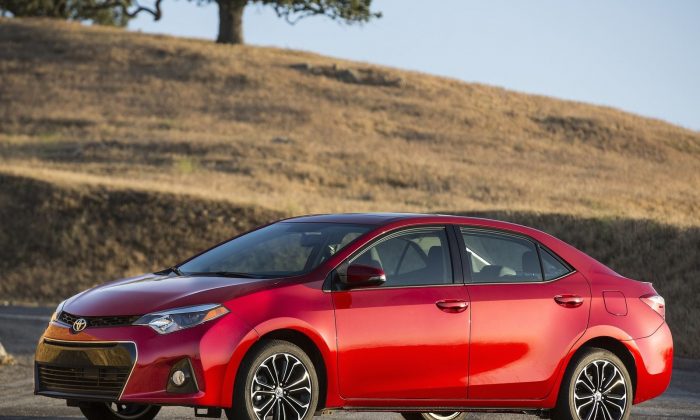 For years the compact Toyota Corolla has been widely acclaimed for its reliability, fuel economy, and resale value, and it has been the sedan of choice for more than 10 million buyers in the U.S. for nearly five decades since introduced in 1968.

While competitors have marketed driving dynamics, cutting-edge styling, and excitement, the Corolla has soldiered on. Corolla’s exterior styling has been decidedly generic and inoffensive, and the interior practical and with the right amount of feature content for a buyer’s budget. This “not too much, not too little” strategy has served the Corolla well throughout its lifetime, and makes the car easy to pick, price, and purchase. Toyota has certainly proved the exception to the belief that styling sells cars.

But, facing a sea of new releases in a highly competitive segment, it was time for Toyota to rethink the Corolla formula. For 2014, the Corolla is still conservative but more stylish, has considerably more rear seat leg room, reaches into the vaunted 40 mpg ranks, and offers a lot of stuff for the money.

Every new Corolla is powered by a 1.8L four-cylinder engine making 132 horsepower and 128 pound-feet of torque with the exception of the LE Eco, which gets an enhanced version with Valvematic continuously variable intake-valve lift and phasing that increases horsepower to 140 and promises 42 mpg in highway driving.

Most models get a continuously variable transmission (CVT). The base L (standard with a four-speed automatic) and upscale “sporty” S model can be outfitted with a six-speed manual. The S model CVT features steering wheel paddle shifters as well as a Sport mode that heightens transmission and steering response.

Our test car was the LE Eco ($19,735), which goes to the head of the compact class in fuel efficiency. We drove the LE Eco for nearly 500 miles in a combination of city and highway driving and realized 37.1 mpg, which falls right into the sweet spot of the EPA ratings of 30 city, 42 highway, and 35 combined. The standard engine, CVT combination is rated at 29/38/32.

We found the LE Eco accommodating in all driving situations with a clock-tested 0-to-60 time of 9.2 seconds. The transmission worked well and while the electrically boosted power steering proved fairly precise, there was very little road feel. Overall, we see few sacrifices—other than price—between the standard LE model and the Eco version with its increased gas mileage.

The new Corolla’s driving experience is enhanced with a remarkably quiet interior, definitely an improvement over the outgoing model and perhaps equaling best in class. Once up and running on the highway we found the LE Eco easy to handle, quick enough for appropriate lane changes, and a relatively smooth ride.

As noted, the 2014 Corolla offers an all-new look while maintaining its conservative turn-no-heads posture. Inside, the cabin continues with the exterior theme, unexciting but modern and with easy-to-use controls. While Toyota continues to use a lot of plastics, they are well done and inoffensive. And Toyota has highlighted the LE-trimmed versions with a padded-vinyl dash with piano-black trim pieces throughout the cabin. There’s even contrasting stitching on the padded door armrests, shifter boot, and seats.

The radio features traditional volume and tuning knobs—still the best way to go—and the climate control knob is large with clear auxiliary climate buttons. The upgraded audio and navigation systems feature a touchscreen with large virtual buttons and simple, clear graphics. We were a bit miffed at the lack of a radio with satellite availability in a nearly 19 grand car. It comes with the LE Eco Plus package costing $700 together with the $1,510 convenience package.

The interior has remarkably grown thanks to a 3.9-inch increase in wheelbase. This has resulted in a five-inch increase in rear-seat legroom making the new Corolla passenger friendly for four adults. At the same time the trunk has a decent 13 cubic feet of cargo space, and the rear seatbacks fold forward increasing the amount of hauling space. One downside, the trunk opening is small and larger items may not fit through the opening.

With pricing close to that of the outgoing car ($17,610 for the L, $19,110 for the LE, $19,520 for the new LE Eco, and $19,810 for the S), the 2014 Corolla is neither the least expensive nor the most costly compact out there. This “not too much, not too little” strategy has served the Corolla well throughout its lifetime in a segment where the customer often is a first-time buyer and that simplicity is appreciated.