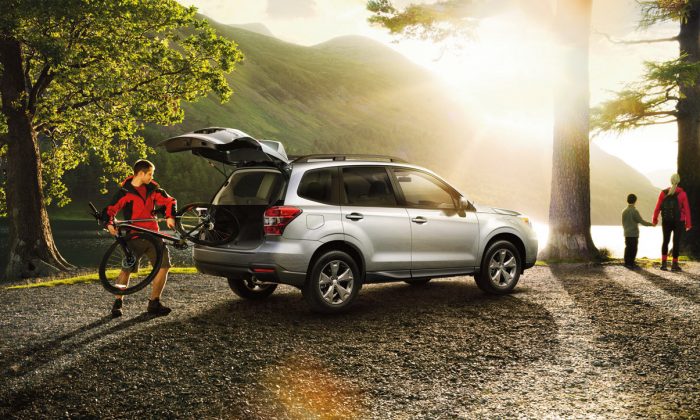 Before I test drove the new 2014 Forester I had a chance to chat with Ted Lalka, VP of Product Planning and Marketing for Subaru Canada.

I’ve always been a fan of the Forester. I empathized with the awkward and unyielding utilitarianism of the original model. It seemed to proclaim, or at least firmly state, that substance is style.

“That boxy, wagon-like design is the concept we used at the time of introduction. There are a lot of people who fell in love with it just the way it was, because it looked different and was unique,” says Lalka.

Since 2004 it’s slowly been creeping toward conformity externally, but what is great about the Forester is still there, and this year, it’s a goodly bit better.

The fully independent suspension and military grade symmetrical, full-time all-wheel drive are genetic of course. Subaru doesn’t mean traction in Japanese [it’s the Japanese name for the Pleiades], but it may be a synonym…

The chassis is new and has been stiffened for agility and wangled to make the ride smoother. A new six-speed manual transmission is available, as is a CVT.

The 2.5 L boxer is carried over from previous models, but the big news is the new 2.0 L DOHC 4-cylinder boxer engine with twin-scroll turbo and direct fuel injection available on the XT models, offering up 250 hp and 258 lb.-ft. of torque.

“It gives you a lot of very usable power throughout the rev range … it makes this vehicle so much more fun to drive,” says Lalka.

If you are hell-bent on having the time of your life and opt for the 2.0 L turbo engine, you should know that they’ve significantly modified the suspension system on XT models in order to handle the power.

Larger wheels and tires are provided, struts are tuned, and the body on XT models has been reinforced to provide more rigidity.

The top-of-the line model has Subaru’s EyeSight system that uses a camera pointing out the front windshield to provide adaptive cruise control and pre-crash braking, and it beeps when you stray out of your lane.

But I didn’t test drive the XT. I drove the 2.5i Touring with the naturally aspirated engine and the CVT transmission. Why? This configuration gets the best fuel economy—words not historically associated with Subaru.

The CVT uses power more efficiently than the manual transmission, consuming around a litre less fuel per 100 km.

Surprisingly, I found Subaru’s CVT transmission smooth, perfectly responsive, and adequate in every way. This has not been the case with other cars with CVTs I’ve test-driven.

Subaru says that the Forester Touring will use 8.3 L/100 km in the city and 6.2 L/100 km on the highway, which is quite good for a compact SUV, but my pathological lead-footedness yielded a higher combined fuel consumption.

When the CVT is paired with the new 2.0 L turbo engine the difference is slightly less (8.9/7.2 city/hwy), but if you pinch pennies then you know that they add up.

The 170 hp and 174 lb.-ft. of torque in this model are more than enough to rapidly accelerate when merging on the highway, tow a small boat or little camper, or make yourself nauseous between stop lights.

You may not need turbo.

Did I actually say that? Okay, if you are the sensible, rational type, and you’d like to save $3,400, you probably won’t need the turbo.

Every car that Subaru makes is an IIHS Top Safety pick. You need not pay extra for that.

The interior of the Touring has nothing that isn’t solid and intuitive. The driver’s seat adjusts to accommodate a short woman like me. The visibility is excellent, and there’s plenty of room in the back and small children can get in and out easily by themselves.

Yes, it’s a rock solid offering, and Canadians are rewarding Subaru for their hard work. Last month Canadians bought 1,194 Foresters, the best month the model has ever had in Canada.