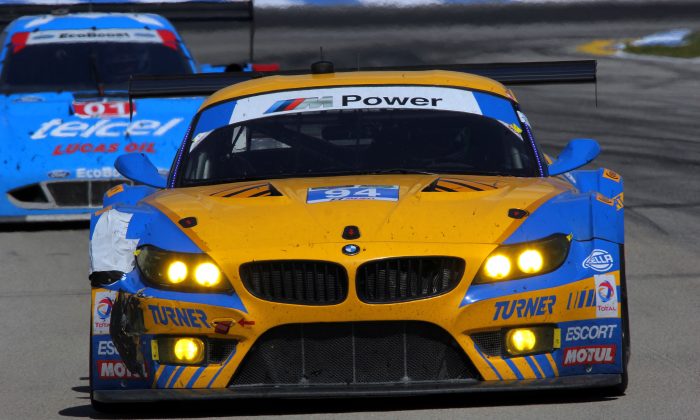 Dane Cameron has a decent shot at both the race win and the GTD class title in the #94 Tunrer Motorsports BMW Z4 GTE. (Chris Jasurek/Epoch Times)
Motorsports

Many sports car races have long histories: fifty, sixty, eighty or more years. Some become classics almost at once.

Though the 1000-mile Petit Le Mans race has only been with us since 1998, it is seen as an essential part of the North American Sports car calendar, another 12 Hours of Sebring—though only a quarter of its age.

Conceived by American Le Mans Series founder Dr. Don Panoz at a time when North American sports car racing was coming unraveled, Petit went on the be the second most important race of the ALMS season, often attracting the best and fastest competitors from not just North America but around the world.

Now that ALMS and its competitor Rolex Sports Car Series have morphed into the Tudor United Sports Car Championship, what will become of the ALMS’ signature race? Tune in to Fox TV at 11:15 a.m. Saturday to find out.

The 17th Petit Le Mans, now a guaranteed ten hours instead of the old ten hours/1000 miles, whichever came first, starts with one of the largest grids in the race’s history—fifty-five cars are expected to take the green flag.

The race is still run on the 2.54-mile, 12-turn Road Atlanta circuit, a fast track with high-speed corners and lots of elevation changes.

Missing will be the international LMP1 the Audis and Peugeots which battled the ALMS P1 teams head-to-head, just as they did at Le Mans. Also missing will be those ALMS P1s. TUSC’s top class is composed of LMP2 prototypes and Rolex-era Daytona prototypes—quick enough cars, but not the best of the best.

One thing that won’t be missing is some of the best GT racing on the planet. The old ALMS GT2/GTE field has been imported intact. Fans will still get to watch the best factory-supported Corvettes, Vipers, Porsches, BMWs, and the familiar Risi Ferrari (and fan favorite Falken Porsche for that matter) battling for class honors. Now called GT-Le Mans, the racing is about the same regardless of the name—generally close and competitive.

Tudor has converted the old ALMS GTC class—basically an advertisement for GT3 Porsche’s GT3 Cup cars—into GT Daytona, featuring a variety of modified GT3 cars from Porsche, Audi, Ferrari, BMW and Dodge. No one can complain about this change; GTD offers some of the tightest racing on track, nearly as fast and every bit as varied at GTLM.

It is advised that race fans check their local listings to see exactly when and on which Fox channel Petit Le Mans will be broadcast in any specific area. According to IMSA.com on Tuesday, Sept. 30, the race starts at 11:15 a.m. eastern on Saturday, October 4 and will be streamed in its entirety without geoblocking on the IMSA.com website.

Television coverage is shown as starting at 3 p.m. on Fox Sports 2, running continuously through the podium ceremonies. A two-hour race recap will air Sunday morning at (possibly) 8 a.m. on Fox Sports 1.

Another plus for fans is that several series championships are on the line at Petit this weekend.

Prototype is theoretically an eight-way battle for the drivers’ title, though it is not so close in reality.

Action Express drivers Joao Barbosa and Christian Fittipadi, with wins at Daytona, Indy and Road America plus third-place finishes at Sebring, Long Beach, Watkins Glen, and CotA, each have 316 points, with a shot at earning 352 with a win at Petit.

The Taylor brothers are 22 points back—their Wayne Taylor Racing DP finished second at Daytona, Long Beach, and Laguna Seca, third at Mosport, and won at Belle Isle. In order to take the title this pair of young drivers will need to finish well—but they also need the Action Express aces to fail pretty badly. Even if the WTR car comes home first, if Barbosa and Fittipaldi can manage eighth, they take the title.

Spirit of Daytona drivers Richard Westbrook and Michael Valiante are a single point behind the WTR brothers, with 293 points. This team needs to win and have AXR do no better than ninth to come out on top.

Telcel-Ganassi driver and five-time Rolex champ Scott Pruett comes to Petit with 286 points, 30 behind the AXR squad. While Pruett and co-driver memo Rojas are probably the favorite to win at Petit after winning Sebring, Long Beach, and CotA (and all those titles) most of the competition would need to take each other out for Pruett to have a hope of adding another title. Of course, that’s not too unlikely, given some of the maneuvers those drivers have used so far this season.

Last on the list, tied with Pruett but sadly less likely to succeed, is Oak Racing’s Gustavo Yacaman. The Ligier-Honda Yacaman will share with Alex Brundle and Ho-Pin Tung at Petit will almost certainly be the quickest car in the field—on an empty track. Faced with all the traffic caused by 55 cars on 2.5 miles of asphalt, the Ligier won’t be able to keep up with the big Corvette V8s or twin-turbo Fords powering the DPs. Yacaman could persevere to finish on the podium, but he would need to win outright—and have all the other P-class cars retire—to take the title. Sorry, Gustavo—not this year.

2014 could well be the Year of the Snake. The SRT Motorsports Vipers have finally found their footing, #93 drivers Jonathan Bomarito and Kuno Wittmer lead the GTLM class with 300 points, while #91 pilots Dominik Farnbacher and Marc Goossens lie third with 283.
Bomarito and Goossens earned wins at Indy and CotA, finished second at Sebring and Mosport, and third at the Glen and Road America. Farnbacher and Goossens earned seconds at the Glen and CotA, and thirds at Daytona and Mosport.

The #93 could take the championship with a win, podium, or fourth-place finish at Petit; with two wins and three podiums in the last five races, this car seems the favorite.

2014 did not start well for Corvette Racing, and it has not been so good towards the end, but the middle was good enough to leave the #3 car seventh with 269 points. Jan Magnussen and Antonio Garcia didn’t reach the podium until the third race of the season at Long Beach—where they landed on the top step. They went on to win the next three races where GTLM competed: Laguna Seca, the Six Hours of the Glen, and Mosport. After Mosport, they couldn’t find their way to the podium again.

Those four wins were enough to give Antonio Garcia 293 points, putting him second behind the two Viper pilots. Magnussen missed some time after a serious collision with the Porsche of Richard Lietz at VIR, but still has enough points—269—to stay right on the edge of title viability.

The #3 Corvette will need to make up seven points on the #93 Viper—even finishing second won’t be enough if the Viper finishes in the top five. Considering the relative trajectories of these two teams in the last few races …

The #4 Corvette had nothing but bad luck all year long; Tom Milner and Olly Gavin are tied for eighth with only a single podium finish, and mathematically out of the hunt.

Despite not getting a win all season from either car, the two BMW team RLL Z4 GTEs are fourth and fifth in the standings, the #55 with 276 points and the #56 with 275. Bill Auberlen and Andy Priaulx in the #55 have 276 points, earned with two second-place finishes and one third; Dirk Werner and John Edwards in the #56 have 275 thanks to the same mix of podium finishes.

Success at PLM could be a story of “horses for courses” for these cars—the Z4s lack top end, but they handle well. Possibly Road Atlanta’s high-speed corners will favor these cars; in which case reliability and preparation will be big factors—and BMW Team RLL have plenty of both.

Realistically neither car has a chance at the title—both Vipers and the #3 Corvette would have to retire or lose hours in the pits for BMW to triumph. Still, nothing is out of the question—that’s why they actually run the races.

Much watched but little noticed, the GT Daytona class often offers the best action in the race, and at Petit, the GTD class will also offer a hammer-and-tongs title fight between four major makes and nine drivers.

Leading the class by a four-point margin is Dane Cameron, driver of the #94 Turner motorsports Z4 GT3. Wins at Laguna Seca, Road America, and VIR plus a third at CotA shows that Cameron (and co-driver Markus Pattlala, who is tied for fifth with 258 points) can wheel the little BMW around handily at a variety of track types, even with the “success ballast” it carried at CotA.

Close behind Cameron comes the Alex Job Racing duo of Leh Keen and Cooper MacNeil in their #22 Porsche 911 America. This pair earned 271 points through consistency—they don’t have a win, and only a single podium finish, but given the volatile nature of the GTD class a handful of Top Fives is worth more than a random win.

A further three points back with 268 are #555 AIM Autosport Ferrari drivers Townsend Bell and Bill Sweedler. This car, which won Daytona as the Level 5 Ferrari, also finished second at Sebring and Watkins Glen, making it the favorite for the ten hours of Petit Le Mans. Only seven points behind the leader, the AIM car could easily win the championship by winning the race—if and only if the Turner BMW fell out of the top four.

Next in line are Bryce Miller and Christopher Haase in the #48 Miller Racing Audi R8, nine points behind the Ferrari drivers. This car has finished second twice and third once, but hasn’t fared particularly well at the other endurance races or even in the sprints. Miller and Haase owe their position to the competitiveness of the GTD field, where it is hard to stay on top. The car can be quick; Miller has several years’ experience and newcomer Haase is surprisingly speedy, but the car has an equal chance to finish near the top or mired mid-pack.

Finally, John Potter of Magnus Racing is tied with Markus Pattlala with 258 points, with a win at Sebring, a second at CotA and a third at the Glen. The Magnus Racing Porsche has always been a crowd-pleaser, and is always a serious threat to finish first, but Potter’s championship chances are minuscule.

Team titles, manufacturer titles, and the North American Endurance Championship are also on the line at Petit; those are, however going to have to wait for another article.