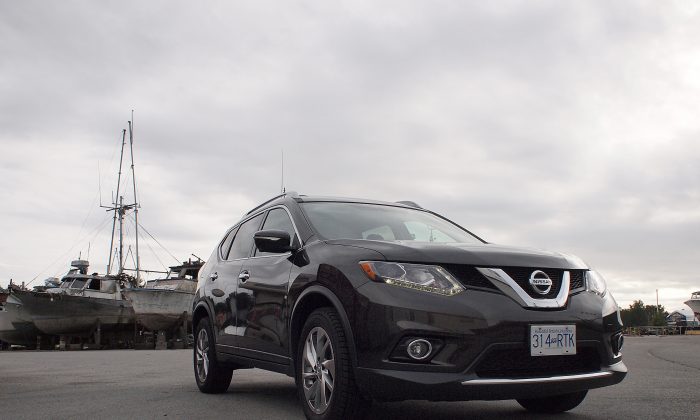 The SUVs over at the Nissan Motor Company have been going through a growth spurt lately. The Nissan Pathfinder was the first to be massaged and stretched out for the current model year, and now the 2014 Rogue has received a complete overhaul as well, catching up to its bigger brother in size.

It’s a much more mature Rogue now, almost no longer relatable to the outgoing version with its smoother and more refined body panels and larger footprint. Wider by approximately 1.6 inches, taller by 1.2 inches, and with a 0.6-inch longer wheelbase, this generation enters mid-size crossover territory. Visual standouts include a new, bolder, wedge-shaped, chrome grille and the LED daytime running lights strip within the headlights. The rear features what Nissan calls their first “muffler spoiler,” a neat under-bumper diffuser that integrates the hidden tail pipe.

Available in three trims, I drove the middle SV model that came in Midnight Jade, a kind of coffee brown colour under certain lighting with a sparkly green metallic sheen in the sunlight. It’s definitely unique, and one of my favorites of the offered paint schemes.

More size on the outside translates into increased space for passengers, and another first is the option of third row seating in the Rogue. Everyone I shuttled around was amply comfortable, with second row passengers getting 37.9 inches of legroom. All seats, except the driver’s, fold flat so you can easily convert it into a cargo vehicle if need be.

If you go for the SV, you can also pay $1,420 for the Premium Package that has Nissan’s easy-to-use navigation system, and Around View Monitor that shows you a virtual 360-degree bird’s-eye view of the vehicle. It’s an excellent aid to parking when you’re trying to get into a tight spot. You may want to close the panoramic moonroof ($1,320 Moonroof Package) while you’re doing that on a sunny day though, because I found glare to be an issue otherwise. Another great convenience included in the Premium Package is the power liftgate that saves you from struggling with one arm to shut the rear lid when you’re holding groceries.

The only engine equipped in the Rogue is the 2.5-L 4-cylinder rated at 170 horsepower and 175 lb.-ft. of torque, mated to a revised continuously variable transmission. Through enhancements such as a 40 percent reduction in friction loss compared to the previous platform, a better belt and pulley system, and wider gear ratios, Nissan claims a 10 percent efficiency improvement for the CVT.

Posted fuel consumption numbers for the SV with all-wheel drive is 28 mpg combined, significantly higher than the 22.2 mpg I achieved, but still very good for this class of vehicle.

The driving experience was comfortable, if not exciting. There is the new suite of technologies such as the Active Trace Control that applies the brakes for you and moderates engine torque in a corner to keep things smooth, and Active Ride Control that does the same thing when going over bumps. Functions you wouldn’t necessarily notice during a routine cruise, but that probably means that they’re doing their job.

The Rogue has been a top seller for Nissan since its introduction in 2008, and it will be interesting to see if this newer, more suave Rogue will maintain its success for the company as new competition continues to flood the market. Onward and upward.