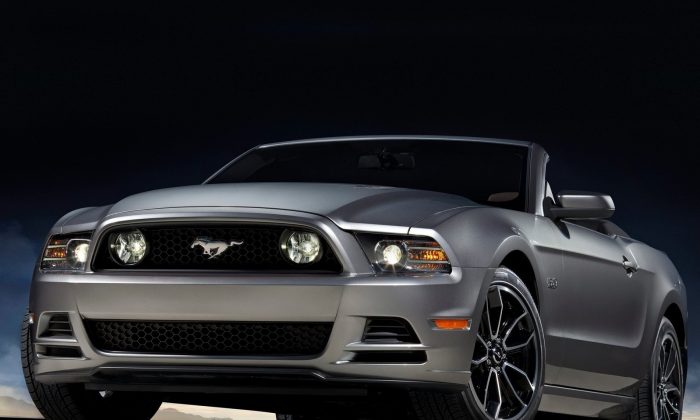 As the Ford Mustang prepares to celebrate its 50th Anniversary with an entirely new model next spring, the current generation shows it still has a lot of pent-up aggression ready for the streets. It looks as good as ever, even with a few rough edges we’ll be glad to see smoothed.

A kick-up in the rear fender, C-cut in the bodysides, and triple barrel taillamps are as expected. Sequencing turn-signals, faux gas cap, and deletion of the rear spoiler enhance the car’s rear view. Mustang-shaped puddle lamps are pretty cool!

Definitely get it in Deep Impact Blue. Ford stylists do a great job of keeping the Mustang contemporary while respecting its heritage.

Same is true of the interior.

The cloth top goes down quickly with the release of two latches and press of one button. One guesses the power plug in the top of the dash has something to do with evading detection.

The key reason people buy Mustang GTs rumbles and growls behind the mesh grille. The 5.0-liter V8 delivers 420 horsepower and 390 lb.-ft. of torque—plenty to roast the rear tread.

It’s all easy to manage with the 6-speed manual transmission. Clutch and shifter actions are precise, allowing drivers to delicately deliver power to the road.

Fuel economy is rated 15/26-MPG city/hwy—not bad for an American muscle car, but nobody buys a toy like this to save petrol. They buy it to make hay of corn-bordered backroads and wide expanses of ranchland, provided there are wide expanses of backroads running through them.

There comes a moment when you’re cruising along behind a semi-truck, or grandma in her Grand Marquis, and you realize what’s sitting beneath your bum. Shift from sixth to third, lift the clutch, hit the gas, and leave it all in your rearview mirror.

With that big V8 under the hood, limited slip differential out back, and electronic stability control just in case, slow-moving obstacles can be swiftly dispatched.

I won’t reveal the speed I saw on the big dial, but I’ll tell you I was running nearly 70 before awakening the engine. An evil fury came along after that.

Closer examination reveals a reason why Mustang is about to get overhauled. Ford can make all of the excuses it wants, but that solid rear axle is for another era. Engineers have given their lives to tame it, but no matter what they do, a bump of one wheel affects the other. Hit those bumps in succession at high speed and the back jitters.

Doors clang shut as if longing for the ’70s. Door plastics are not fit for a premium-priced sports car. Seats have leather inserts … alongside plenty of black vinyl. Everything looks good, but the Mustang’s competition is more refined. It’s all old-school, and how legions of Mustang enthusiasts want it.

By this time next year, the next-generation Mustang will be on the streets, riding on a four-wheel independent suspension, and boasting turbocharged four- and six-cylinder engines.

Powerful V8s will surely be available. A little of the car’s classic character will be lost, so if that breaks your heart, get one now.