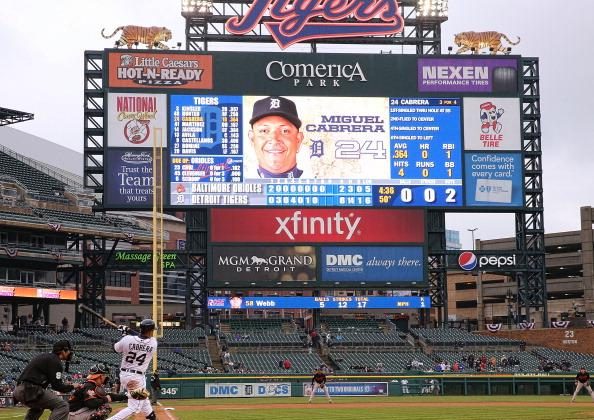 In this week, the first of the regular season, one team stands atop the league as the lone undefeated team and more importantly, they did it against a contending American League East team and a contender to their grasp over their own division.

The American League Central champion Detroit Tigers stand a step above the rest of the league as the lone undefeated team. They had one game against the Kansas City Royals postponed due to poor weather but they had two walk-off wins against their division opponents. Late-minute acquisition, shortstop Alex Gonzalez paid instant dividends in the first game of the season with the game-winning single an early offseason acquisition Ian Kinsler put in his efforts with a three-hit game, including another walk-off single for two consecutive walk-off wins against the Royals. Miguel Cabrera opened the series with the Orioles with a four-hit game, including his 2,000th career hit, a two-run home run as the Tigers look like a force to fear this season.

The presence of monster free-agent acquisition Robinson Cano looks to be paying off immediately for the Seattle Mariners. First baseman Justin Smoak was a key contributor to the Mariners’ opening series with the Los Angeles Angels, a division opponent, as the Mariners swept them soundly, outscoring the Angels 26-8 in a three-game series. The Mariners lost one game with the Oakland Athletics due to poor field conditions but they were able to win one of the two games this week on the arm of their ace, Felix Hernandez.

The San Francisco Giants opened their season with six games against division rivals, Arizona Diamondbacks and Los Angeles Dodgers, all on the road. First baseman Brandon Belt got off to a hot start with two home runs in the opening series with the Diamondbacks and a third home run to get his season started on the right foot. Free agent acquisition Mike Morse paid off with two key contributions, once in the Diamondbacks series and once in the Dodgers series. Tim Hudson brought his veteran presence and ground ball pitching to help to a win in his Giants debut. The one loss they had was a one-run loss to the Diamondbacks as they get the regular season to a strong start.

The Miami Marlins make an early appearance on this year’s Power Rankings but their record of 5-1 is seen with some doubt as they faced two of the weaker National League teams. On the power of bats like Giancarlo Stanton and Casey McGehee and pitching from Jose Fernandez, the Marlins have come out of the gates hot but the real question is how long can they keep this up?

The Tampa Bay Rays’ deep lineup has contributions from different batters for each of their games. The one major struggle the Rays had came against Blue Jays veteran Mark Buehrle, who went 8.2 scoreless innings with a very impressive 11 strikeouts. If the Rays can just avoid the crafty Buehrle, the Rays will continue to be a regular presence on the Power Rankings.

With Kris Medlen and Brandon Beachy lost to Tommy John surgery, the strength of the Braves was now in question. Limiting their opponents to, at most, two runs in each of the first five games of the season, the strength may still be with the Braves. Over five games, the Braves have allowed just seven runs. Freddie Freeman supplied plenty of offense while Julio Teheran and Aaron Harang put some great pitching while arguably the best closer in the game; Craig Kimbrel continues to be a shut down closer.

After an opening day shootout with the Texas Rangers in an interleague matchup and a gut-wrenching walk-off walk loss by Jonathan Papelbon, the Philadelphia Phillies returned to the National League and got a ideal matchup against the Chicago Cubs. Chase Utley teed off on the Cubs pitchers and Cliff Lee picked apart the Cubs offense with his precision control. If the Phillies intend to make a run at success one more time, they will have to depend on the likes of Lee, Utley, Rollins and Domonic Brown.

The Pittsburgh Pirates begin the 2014 season looking to create a streak of winning seasons and they toughed out a pair of extra-inning wins to open the season and take the opening series with the Chicago Cubs. Pedro Alvarez supplied the power to defeat division favorites, the St. Louis Cardinals but would split the first two games of the three-game series. The Pirates have benefited from opening the season at home and will look to bring their success with them on the road for next week’s games against more division opponents.

Division favorites, the St. Louis Cardinals had some duels with the Cincinnati Reds to open the season. They won their first game of the season with one run and Adam Wainwright’s great seven innings. They would lose the second game in another pitcher’s duel when Michael Wacha and Tony Cingrani went zero-for-zero in a one-run loss. Jhonny Peralta brings the power expected of him to the Cardinals to help them to a couple wins. The pitching continues to be strong despite allowing more runs than they have scored. It was swayed by the one-sided 12-2 loss to the Pirates but they will continue to be a contender for a championship with consistent hitting and outstanding pitching.