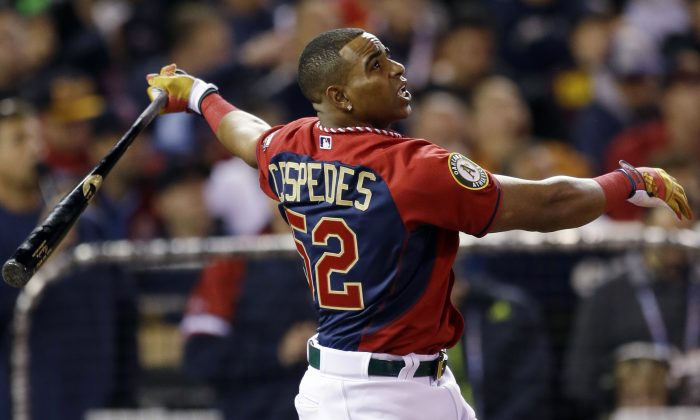 The champion would defend his throne in the 2014 Home Run Derby.

Oakland Athletics slugger Yoenis Cespedes would advance in the first round of the new bracket-style tournament over his teammate Josh Donaldson in a tiebreaker after they each hit three home runs. Cespedes hit two home runs in the tiebreaker, Donaldson and his single home run.

In the third round, Yoenis Cespedes would defeat Jose Bautista by a score of 7-4. Favorite to win the event, Giancarlo Stanton, would surprisingly be shutout in this round, losing to Todd Frazier by a score of 1-0.

Defending champion Yoenis Cespedes would win the final round decisively over Todd Frazier by a score of 9-1. Cespedes is the first back-to-back winner of the Home Run Derby since Ken Griffey Jr. did it in 1998-99.

The 2014 MLB All-Star Game featured some great pitching, good offense and the final appearance of one of the greatest at the Midsummer Classic.

The player introductions at Target Field, home of the Minnesota Twins, featured the normal biased cheers towards home team favorites like catcher Kurt Suzuki and pitcher Glen Perkins. In addition to their home team representatives; Cardinals reliever Pat Neshek was a former Minnesota Twins pitcher who has made his return home to a warm reception.

The other very nice hand was given with the introduction of New York Yankees shortstop Derek Jeter, who enters his 14th and final All-Star game appearance.

There is still a game to be played.

The National League leadoff hitter was Pittsburgh Pirates outfielder Andrew McCutchen. The Pirates’ outfielder would hit a ground ball to center field but Derek Jeter, at age 40, would turn back the clock and show range with a diving stop to his left. He would try to get McCutchen at first but he would be ruled safe. What a way to start the game. American League starter, Seattle Mariners’ pitcher Felix Hernandez, pitched a scoreless first inning despite the leadoff hit.

National League starter, St. Louis Cardinals’ pitcher Adam Wainwright got the nod for starting pitcher tonight and he led his team in a classy, respectful gesture to start the bottom of the first inning. With Derek Jeter coming to the plate, to the voice of the late Bob Sheppard’s All-Star introduction, Adam Wainwright and the National League led the Target Field crowd in a standing ovation; thanking the New York Yankees shortstop for all that he has done for the game of baseball.

After an acknowledgement by Jeter, it is time to play baseball. Derek Jeter would lead off the game with a double to right field in vintage Derek Jeter fashion. Mike Trout would follow with a triple to deep right center field and the American League had the early lead. One batter later, Detroit Tigers’ first baseman Miguel Cabrera put the American League ahead by three with a two-run home run. In one inning of work, Adam Wainwright allowed three runs on three hits.

In the second inning, Boston Red Sox starter Jon Lester got the call and the National League would get back into the game. After a single by Milwaukee Brewers third baseman Aramis Ramirez, Philadelphia Phillies second baseman Chase Utley and Brewers catcher Jonathan Lucroy would hit back-to-back doubles to score two runs in the inning.

Derek Jeter would get his second hit of the night with a single to right field off of Cincinnati Reds pitcher Alfredo Simon in the third inning.

In the fourth inning, Derek Jeter would take the field but he would be replaced by Chicago White Sox shortstop Alexei Ramirez. Jeter would exit the game for the final time and received a standing ovation from the Target Field crowd one more time. Jeter would wave his cap to acknowledge their praise as he went to the American League dugout, embracing every member of the team with a handshake and a hug. He would emerge one more time for a final ovation and the game would go on.

Against Chicago White Sox pitcher Chris Sale, Chase Utley would reach base when a pitch hit him. Pinch runner Los Angeles Dodgers’ second baseman Dee Gordon can fly around the bases. Jonathan Lucroy would hit a double and Gordon would score from first base to tie the game at 3.

Against Cardinals reliever Pat Neshek in the fifth inning, the American League would break the tie and keep the lead. Oakland Athletics catcher Derek Norris would hit a one-out single and would be followed with a single by Alexei Ramirez. Mike Trout would get his second extra-base hit of the game with a double, scoring the go-ahead run. Houston Astros second baseman Jose Altuve would hit a sacrifice fly against Washington Nationals reliever Tyler Clippard and the American League took a two-run lead.

The 2014 MLB All-Star Game Most Valuable Player award would go to Los Angeles Angels outfielder Mike Trout. The 22-year-old Trout had two hits in three at-bats and he hit a double and a triple to score two runs. He is the second youngest player to win the MVP only behind Ken Griffey Jr.