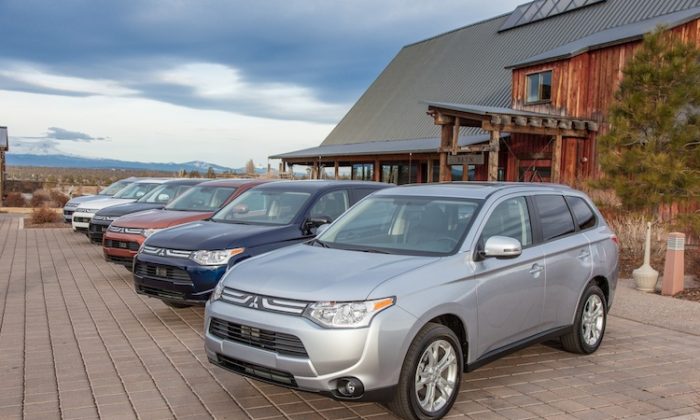 Outlander vs. Santa Fe vs. CX-9 vs. Sorento
By Zoe Ackah
biggersmaller
Print

Mitsubishi’s Outlander redesign seems to be the answer to the question of our times: “What can I buy that has all the features of a mini van, but looks like the SUV I actually want to drive?”

The 2014 Outlander is offering plenty of premium features for less. What they’ve come up with is an inspired offering, but it might fly under the radar if you don’t look closely.

On the outside it is more conservative-looking than the outgoing model. This has resulted in a lower drag coefficient, which means fuel savings, but it also means you can hang on to your car for longer without it looking dated.

On the inside they have upgraded pretty much everything. It’s safer, quieter, lighter, both engine options are better on gas, the chassis is more rigid so it drives better, and the cockpit has been taken up a couple notches too.

You may not need it every day, but when you need it, you really, really need it. It is a deal-breaker. It’s where you put the kids, plus multiple “best friends,” on a Saturday; it’s where you keep violent sibling offenders at arms length; when flat the third row is where you put groceries, hockey bags, and your brief case–all at the same time.

Bottom line? The Toyota Rav 4, the Honda CR-V, the Subaru Forester, the Chevy Equinox, the Ford Escape, the Nissan Rogue, the Kia Sportage are no longer on my list of competitors for the Outlander—until they get a third row of seats.

Here’s the stuff I deem essential besides a third row: Back-up camera, Bluetooth connectivity, super comfy heated driver’s seat for my back, and all-wheel drive because when it snows I think I need it and a enough power to merge safely on the highway (so that means a V6 engine, or 4 cylinders with turbo).

How much does each car cost with all of these features? [I’ll use the 2013 models as the details on the 2014 model are not yet available]

2014 Mitsubishi Outlander GT S-AWC at $35,998 has everything on my list, plus you get adaptive cruise control, lane departure warning and forward collision mitigation. These are premium safety features the others don’t offer, and which you can’t get on a Honda Odyssey for under $47,200.

The 2014 Outlander also won an IIHS Top Safety Plus Award in July.

You may wonder if the build quality is lower because the Outlander is less expensive. Actually, the Mitsubishi warranty is 10 years, 160,000 km for the powertrain and five years bumper to bumper. That’s a financial safety feature.

The competitors offer the standard five-year 100,000 km drive train warranty plus three years for all the fiddly bits. Considering all four vehicles will depreciate similarly, if you plan to sell after five years, having five additional years of warranty is a pretty good bargaining chip.