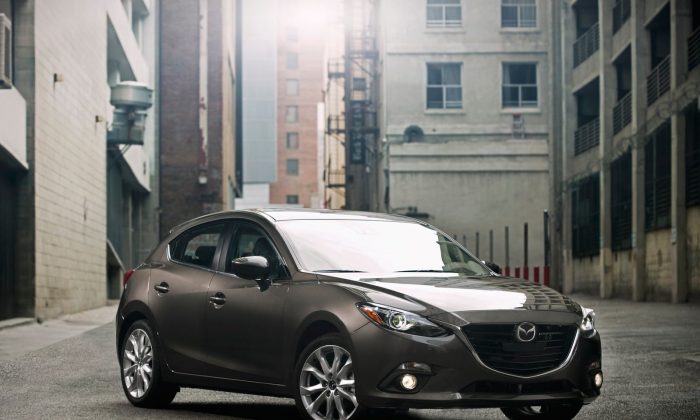 There are lots full of well-built compact cars that you would be happy to own. But, there are a select few that you would be delighted to drive. Count the Mazda3 among the latter. It’s comfortable, reliable, and fuel-efficient just like the best-sellers. You could buy one of those, but wouldn’t you rather enjoy the drive? Check the handsome Mazda3 that was redesigned for 2014.

Whether looking at the five-door hatchback, or four-door sedan like our test car, styling looks like it could have been performed by Italy’s famed Pininfarina design house. Interest is drawn from smooth curves and fluid sides instead of tacked on plastic. The front wears Mazda’s trademark five-sided grille, but outlined in elegant chrome that flows into the light tube driving lamps. A fast roofline and high decklid give the car a speedy stance, accentuated by 16-inch alloys, lower body extensions, and a body color lip spoiler. It projects sophistication beyond its class.

Same is true of the interior. Slip into the deeply-bolstered, heated, leather seats, adjust the perfectly-sized, leather-wrapped, steering wheel, and gaze into the big silver-lit analog speedometer. You’re ready to haul down the first curvy road you find, or stretch down the interstate while listening to the Bose audio system, comforted by the dual zone automatic climate control, and pairing your Bluetooth-enabled device for hands-free calling and audio streaming. Blind spot warning, rear cross path detection, and rearview camera enhance safety.

It goes beyond all of the toys, although the BMW-style center dial for controlling the infotainment system works well. Everywhere you touch is padded, leather-wrapped, pseudo carbon-fibered, or piano black. One doesn’t necessarily expect a compact car to have anything other than boring hard plastic, but Mazda designers specified better materials. The 7-inch screen is stuck on the top of the dash, but I like it there so designers can focus on creating a simple and functional cabin without too much emphasis on the big screen.

Perhaps the most fun part of this little spitfire is the 2.0 liter DOHC four cylinder engine under its finely-sculpted hood. It generates 155 horsepower, 150 lb.-ft. of torque, and turns in a frugal 29/41 mpg city/hwy. (33 mpg combined). It’s most delightfully shifted through a click-click six-speed manual. One imagines a bit of Miata in every rev and wrist flick.

Beyond shift action, Mazdas are characterized by swift suspension and steering motions. The four-wheel independent suspension system sachets over undulating backroads and settles down on fast Interstates. It is both entertaining and reassuring. It’s firm, but that’s what Mazda owners prefer.

Putting a damp blanket on this party, the suspension can get chattery over rough pavement, the infotainment system takes a few minutes to master, and in drab colors, the exterior looks, well, drab. Burgundy is not my favorite color on the car. I’d go for something darker or shinier to reflect the body’s crisp surfaces. I’m also not completely in love with the electrically-assisted steering that can feel vague on the open road.

Without Ford as its corporate patron, Mazda gets back to doing what it has always done: Build cars that feel and look like Japanese Alfa Romeos. You could buy any practical compact car for that daily commute, but wouldn’t you rather enjoy the drive? A base price of $16,945 – $24,035 as-tested – puts the Mazda3 against the Honda Civic, Toyota Corolla, Ford Focus, Dodge Dart, Chevy Cruze, VW Jetta, and Hyundai Elantra.