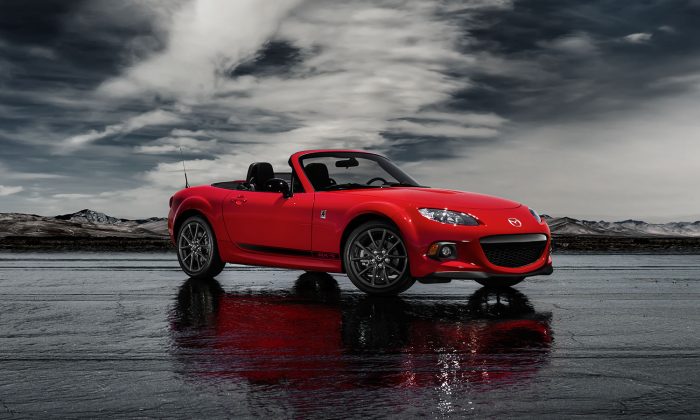 The MX-5 Miata roadster has a record of unrivaled longevity. Mazda this year marks the 25th anniversary of its little sports car that has endured for a quarter century, true to its roots as an affordable rear-drive open-air two-seater.

While the MX-5 Miata has seen incremental evolutionary updates over the last quarter century—bigger and more fuel-efficient 4-cylinder engine, power retractable hardtop—it still remains the only rear-wheel drive roadster in the British tradition on the market with well over one million sold worldwide, a record according to Guinness.

Roadster purists may cringe at the thought of an open-air two-seater with a hard top, but the advantages are many including having the comfort of a quiet, completely weather proof interior with the top up. But if you insist, a vinyl soft top version is still available. It also costs less.

Regardless of the top, the little fun machine remains relevant against all odds primarily because of the large dose of driving excitement it brings to mundane commutes. How can you not fall in love with the little convertible with its road-carving attributes, its sharp, precise steering; and its wind-in-the-hair euphoria?

There’s something addictive about rowing through the gears with a slick-shifting six-speed manual transmission watching the 2.0-liter 4-cylinder’s rpm climb to redline territory. It seems the combination of 167 horsepower and 140 pound-feet of torque with the manual shifter in hand and the top down is what real driving enjoyment is all about. Granted, the MX-5 is not going to win many straight-line races with a rather sedate (by today’s standards) 6.7 seconds 0-to-60 time. But this car is not so much about speed as the overall driving experience. Note that when mated to the available six-speed automatic, horsepower drops slightly to 158.

The MX-5 is also about decent gas mileage because of the car’s relatively light weight—2,511 pounds with soft top and 2,593 pounds with the hard top—and fuel-efficient engine. With the 6-speed manual transmission fuel economy is EPA-measured at 28 mpg highway and 21 mpg city. Premium gas is recommended, but lower grades can be used.

Thanks to the MX-5 stiff structure, the little car is devoid of quivers and shakes with the top down. It’s rock solid. The rear glass window in the soft top includes a defogger. And twin roll-hoops give the occupants some rollover protection. Wind buffeting is tolerable, with some benefit from a small wind deflector located behind the seats.

The controls are simple and logical, and the interior, trimmed out in black, is handsome. A silver panel across the dash gives the interior a nice pulled together look. Silver rings around the gauges add an upscale touch.

Standard safety in the MX-5 is what you expect for all cars including traction and stability control, antilock disc brakes, and the usual array of airbags. Mazda, however, does not offer a backup camera.

To get equipment that has become common place for new vehicles such as cruise control, power door locks, keyless entry and steering-wheel mounted controls you will have to move up to the Club trim starting at $27,700.

To get a more luxurious feel, it’s necessary to move to the Grand Touring starting at $28,345. It brings automatic climate control, leather upholstery, heated seats, and an upgraded seven-speaker Bose audio system. The Grand Touring (which we also drove) qualifies for the Premium package that includes keyless entry and ignition, and Bluetooth phone connectivity and satellite radio; and the Suspension package that includes a sport-tuned suspension with Bilstein shocks and a limited-slip differential. This combination with the hardtop and manual transmission goes out the door for $32,285.

Our test Club trim with manual transmission, power hardtop and satellite radio ($430) had a bottom line of $29,460.

To date there have been three generations of the MX-5, with the last major redesign in 2006, but note that the current 25-year-plus run of the familiar Miata will soon come to an end. Mazda is planning an all-new from-the-ground-up roadster with new styling powered by its new SkyActiv engine technology. The fourth generation MX-5 Miata will make its world debut Sept. 3 and will go on sale sometime in 2015 as a 2016 model.