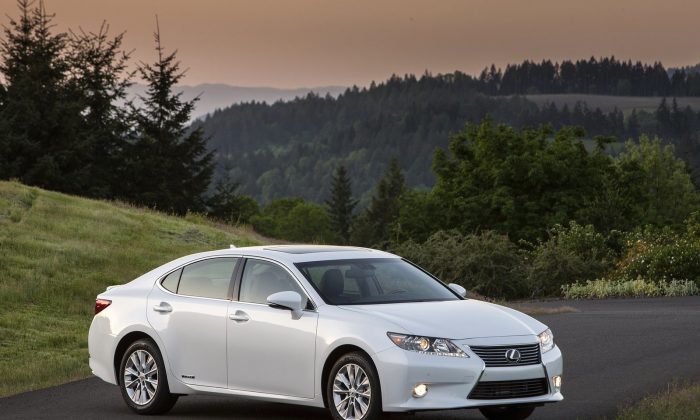 I have been writing automotive reviews since 2001, and in that time I’m sure that I have written about Lexus vehicles more than any other manufacturer. So when I say that the ES has always been my least favorite Lexus, that opinion is based on years of experience and comparison. Entry-level luxury? Fine. Whatever. To me, it was never anything more than a fancier version of the Toyota Camry. That might be an overgeneralization, I admit. But I’m a writer, and so I think I’m allowed a few here and there.

However, the 2014 ES (which was new last year) has finally won me over. Yes, sound the trumpets and wave the banners, the ES has come into its own, and is finally what it was always meant to be—excellent. And as a hybrid? Well, that’s just the icing on the cake.

So let’s start there. The 300h uses the same hybrid system as the Camry, but trust me, that’s where the comparisons to Toyota end. Hybrid technology has continually improved over the last decade. There’s no more rumble when the gas engine kicks on. Transition from electric to gas or both is seamless, and the only way to really tell is by looking at one of the indicator lights or the on-screen information display.

One thing you have to get accustomed to is the braking system. Hybrids use regenerative braking to capture the car’s kinetic energy and charge the battery pack. This means the brakes are touchy, or hyper-responsive, if you prefer. They engage immediately to pressure on the brake pedal, which isn’t necessarily a bad thing; it’s just not the most normal feeling in the world. Estimated EPA fuel economy is 40/39/40. The trip computer told me I was getting about 37 mpg on average, slightly lower than what I would have expected.

The power train consists of an all-aluminum 2.6-liter in-line 4-cylinder engine and a high output permanent magnetic electric drive motor, matched to a continuously variable transmission. You get a total of 200 horsepower, which is sufficient for pulling up mountain highways and canyons, and more than ample for city driving.

The ride itself is firm; if you’re looking for that smooth, ultra-luxurious, zero-gravity ride, you’ll want to upgrade to the LS. I would call the ride entry-level luxurious, which again, isn’t necessarily a bad thing. The ES is responsive, but not rough; comfortable, but not cloud-like. It’s easy to drive and feels good doing it. Outside noise is blocked by dense, solid, insulating materials, and the cabin becomes an oasis of quiet—a small escape from the hustle and bustle of the outside world.

Speaking of which, the interior is where the ES shines. The wood and leather steering wheel is the perfect thickness for a comfortable grip. Soft touch surfaces, brushed nickel, and just the right amount of bamboo trim combine for an elegant atmosphere. Perforated leather heated and cooled seats add a little more than entry-level luxury. As a watch fiend, I especially liked the polished analog clock placed in the center stack.

The multi-information display, controlled by a small joystick-like device, offers more than you will ever need to know about your car, and can be distracting at times. I just want to turn on the radio and drive. The 8-speaker premium sound system sounds great, and I can pick up SiriusXM satellite radio wherever I go.

The power trunk lid was one luxury feature that seems somewhat gratuitous, considering that a trunk will just pop open by its own momentum. Some trunk space is lost to the battery pack, but still holds plenty at 12.1 cubic feet of storage. A back-up camera and blind spot monitoring are helpful, and I really liked the cross-traffic sensor that sees oncoming traffic for me when I’m backing out of a parking spot.

The ES 300h looks good on the outside, too. Seventeen-inch alloy, split 5-spoke wheels add some flair, as does the spindle grill, which is now Lexus’ signature look.

Safety features include lots and lots of airbags for both front and rear. The ES is also equipped with 4-wheel anti-lock braking, crumple zones, and smart stop technology.

So yes, I am finally a fan of the Lexus ES. Lexus got this one right—entry-level luxury is now well-defined and well executed. MSRP for a base 300h is $39,350. With approximately $9,000 in options, my test vehicle rolled in at $48K and change.