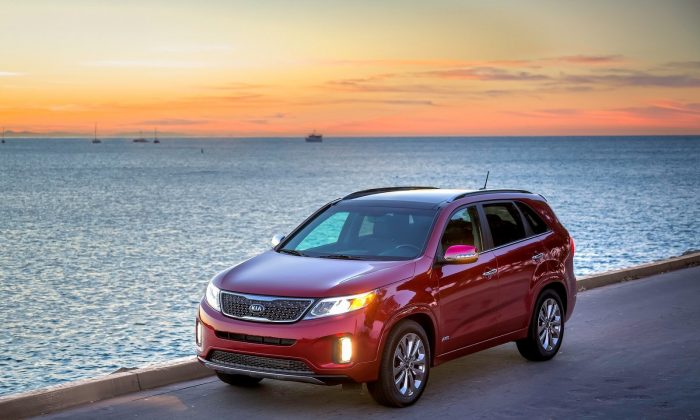 A very good Kia Sorento, mid-sized crossover, sport utility has been made even better with the 2014 model. Kia has endowed the newest Sorento with styling updates, an upgraded interior and a new, more responsive V-6 engine.

Gone is last year’s base four-cylinder, leaving the former mid-level 191 horsepower 2.4 liter engine as the base powerplant. But the big news is a new 3.3 liter V6, which makes 290 horsepower and 252 pound-feet of torque, a gain of 14 horsepower and four pound-feet of torque over the outgoing 3.5 liter engine. For comparison, 0-to-60 time has been measured at an energetic 7.3 seconds and, as a bonus, the new V6 is rated at 20 mpg city and 26 highway in two-wheel drive (18/24 AWD), a solid two mpg improvement over the 3.5-liter. Both engines get a six-speed automatic transmission.

Although Kia maintains the Sorento has simply had a facelift, the 2014 boasts a new platform that increases torsional rigidity by 18 percent. A major focal point in its design was to improve ride and handling, and improve it they did. It “straightens out” curves thanks to its standard Electric Motor Driven Power Steering that replaces the hydraulic unit from the 2013 model. It’s quicker with 2.95 turns of the steering wheel, lock-to-lock, and offers drivers a choice of three steering modes: comfort, normal and sport.

Road noise is nearly eliminated. Few vehicles in its segment offer the degree of silence exhibited by the new Sorento. If you, as a driver, are counting on wind and road sounds to drown out the incessant babble emanating from the rest of the vehicle—particularly from the front-seat passenger—the only way that’s going to happen is to crank up the standard audio system, or better yet, pop for the Infiniti surround sound audio with 10 speakers.

The 2014 Sorento comes in four models: LX, EX, SX, and Limited. Each is available in front-wheel drive or full-time AWD. The LX is available with either the four-cylinder or V6, but the others are V6-powered only.

If you are sold on the Sorento, but your budget can’t stand more than the base model, you will be rewarded with an impressive list of standard features including 17-inch alloy wheels, air-conditioning, full power accessories, 40/20/40 split-folding rear seats, a tilt-and-telescoping steering wheel, Bluetooth, and a six-speaker sound system with a CD player, satellite radio, and USB/auxiliary audio jacks. Note there are a large number of port-installed options as well as factory-installed packages available.

Standard safety has not been overlooked and includes antilock disc brakes, stability and traction control, hill-start assist, a full complement of airbags, and active front headrests. Move up just one trim level and blind-spot monitoring, one of the best safety features to come along in the last decade, becomes standard equipment.

Externally, the new Sorento is easily identified from the model it replaces. It has redesigned front and rear fascias that give it a lower, broader look in the front and a wider stance at the rear. The signature Kia tiger-nose grille is enhanced with an anodized silver metal or black mesh. Available fog lights have been pushed to the far corners of the front bumper and horizontally-positioned rear LED combination lamps enhance turn signals and back-up lights. It also rides on 17-inch, 18-inch, or 19-inch wheels, the latter being a first for Sorento.

The interior is incredibly spacious and front-seat and second-row seating has plenty of legroom—41.3 inches/38.8 inches. The third row, best reserved for youngsters, has 31.7 inches. Cargo volume is 72.5 cubic feet with all rows down. Towing capacity is 1,650 pounds in the four-cylinder and 3,500 pounds as a V6. Furthering user convenience, Kia’s first power liftgate is available.

The instrument cluster housing is beautiful and the dials are easily legible. The stylistic center stack provides user-friendly controls and upscale materials are prevalent everywhere. There is not the squeezed-in feeling on either side of the driver’s or passenger’s legs, either.

Two leather grains are also available. There’s a lot of technology including a redesigned panoramic sunroof with a one-piece, power-operated shade, a 115-volt power inverter, and illuminated door handle pockets. Kia offers one of the best connectivity packages in the industry via its UVO eServices, Kia’s next-generation of infotainment and telematics.

We think the new Sorento is more than a facelift.