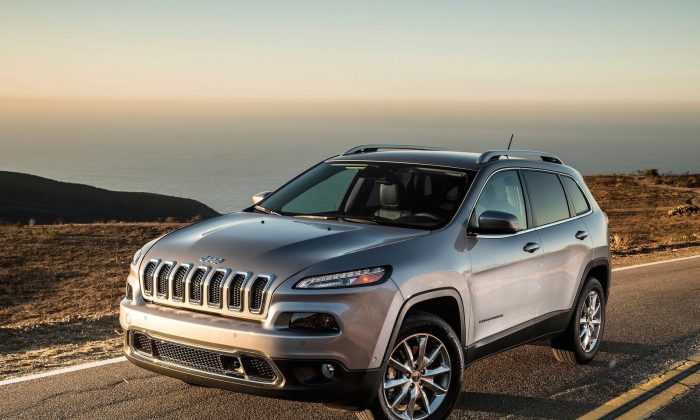 Compact crossovers are the family station wagons of the 21st Century and Jeep has a new contemporary entry in the burgeoning segment to do battle with such heavyweights as Ford Escape, Honda CR-V, and Hyundai Santa Fe. Aside from the traditional seven-slot grille the 2014 Cherokee is a totally new take on the old bare bones Cherokee that exited the scene in 2002.

The new Cherokee differs in a couple of significant ways from standard crossover fare. Jeep has endowed it with the ability to wade through mud and crawl over rocks—go where virtually no other car-based crossover dares follow.

It comes with an industry-first, nine-speed, automatic transmission designed to more effectively use optimum torque and conserve gas. It can be ordered with a slightly smaller version of Chrysler’s award-winning Pentastar V6, making it one of the few segment vehicles currently with a V6 option, giving it a sense of urgency and a rather hefty-for-the-segment towing capacity of 4,500 pounds.

The new Cherokee in top-line Trailhawk 4X4 trim is a real tour de force among the crossover crowd featuring skid plates, an auxiliary transmission oil cooler, a rear-locking differential, all-terrain tires, unique suspension tuning for more off-road capability, tow hooks, and a SelecTerrain dial that offers Auto, Sport, Snow, and Mud/Sand modes. Be forewarned the Trailhawk with the V6 comes at a rather steep price starting at $30,490 including destination charge.

The Cherokee has somewhat of a Jekyll and Hyde aspect to it with two engine configurations and with several trim levels. Standard is a 2.4 liter, four-cylinder, engine rated at 184 horsepower and 171 pound-feet of torque. It should prove an adequate engine for most people, but compared to some of the competition’s four-bangers it feels a bit sluggish. In front-wheel drive configuration and in base Sport trim starting at $23,990 the Cherokee is much like the base trim levels in segment competitors.

Standard across the lineup are the nine-speed automatic transmission, hill start assist, and a backup camera, a combination that has no rivals. But to get the full flavor of the Cherokee and put it on the correct side of the Jekyll and Hyde equation we recommend spending the extra $1,495 and moving to the V6 engine, which is available in all but the base vehicle. It puts a different spin on the Cherokee, elevating it into “gotta have” territory.

We found acceleration forceful and smooth through the nine-speed transmission mated to the 271-horsepower V6 in our Trailhawk test vehicle. We estimate that the Cherokee can finish off a 0-to-60 run in about 7.5 seconds, about average for top engines in the segment including the turbocharged fours.

Even with its considerable off-road credentials, the Jeep’s highway ride is commendably pleasing. The electric power steering provides solid feedback and the front independent suspension and rear multilink setup keeps the Cherokee firmly planted with limited body roll through the twists and turns. And the Cherokee is remarkably quiet at all speeds.

The interior is well done with a driver-friendly layout and storage spaces abound throughout the cabin. The large 8.4-inch display screen (base models come with a 5-inch screen) offers the best read-out of satellite radio information in the industry.

Optional is the award-winning UConnect system that integrates infotainment features as well as other controls. There is also a USB port.

Rear passengers are offered a high degree of comfort in seats that recline and adjust fore and aft. But the excellent passenger space comes at the expense of cargo capacity. There’s an adequate 24.8 cubic feet of storage behind the seats and 54.9 cubic feet with the rear seats folded.

The Cherokee is on the pricey side in the crossover segment, but if you shop carefully it’s possible to get a well-outfitted vehicle for under $30,000. For example, the Latitude in front-wheel drive format with V6 engine and Comfort/Convenience package that includes keyless entry and ignition, power driver’s seat, power liftgate, dual-zone climate control, and satellite radio carries a price of $28,980 including destination charge.

At the extreme on the upper end, our Trailhawk test vehicle that included leather interior, the aforementioned comfort package, and navigation carried a bottom line of $36,120.